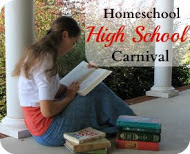 Joining in the Homeschool High School carnival hosted this month by Theresa over at Lapz Home Learning.

The following is a glimpse of  ‘A Day in Our Life’, this ‘day’ I focused only on our teens, and in particular their academic pursuits.  Randomly I selected a Thursday to record, was it a typical day?  In some respects yes and yet not.  This year Einstein(16) spends the majority of his studies focusing on his Open Uni Course, although on the day selected he elected to spend all of his study time on his Open Uni, other days he alternates between his subjects,  which have been pared down to allow for his new workload.  Was it a typical day for Michelangelo(13)?  Not really, he played alot with his siblings which doesn’t always happen, and and he even joined the younger ones for a lesson, which was unusual.  Other days he may join Einstein and Princess for a writing lesson but not the youngest ones, and a typical day for Michelangelo normally includes far more reading and academic work.  Yet this day is valid in that it reflects the ebbs and flows of our life, no two days are ever identical, it is by observing a week, a term, a year (and longer) that we gain a much clearer picture of what a home education lifestyle ‘looks like.’ 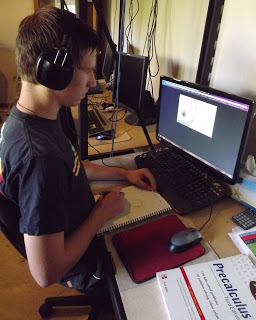 7:30AM Einstein and Michelangelo arise for breakfast.

8:30AM Einstein begins his Open Uni Maths- Trigonometry and Algebra.
Michelangelo works on dictation, with Princess(11) dictating to him, whilst I work with a sibling.

9:00AM Einstein continues with Algebra/Trigonometry.  This maths course has been a huge jump for Einstein, he has gone from completing Grade 10 maths straight to University maths, we’re rather impressed with how he has coped, but it does mean he has to do extra study with each new concept. 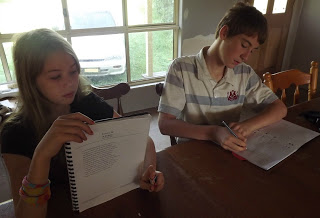 Michelangelo decides to join us for ‘Handwriting Boot Camp’  a new implementation this term.  Sadly most of our boys have really struggled with handwriting, so I have instituted ‘boot camp’ in the hope of addressing the issue in some cases and ‘nipping in the bud’ in other.

10:00AM Einstein is still working on his Algebra/Trig course
Boot camp concludes and Michelangelo begins his second dictation lesson with me. Two lessons in one day is not the ideal way to study but the truth is it often occurs this way. 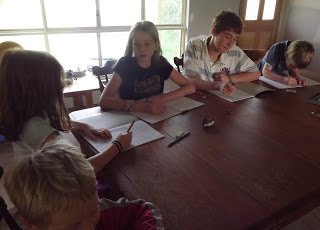 10:45AM Einstein heads outside for a break, jumping on the trampoline, his favourite relaxation.  Michelangelo heads out to play with younger siblings on their climbing rope, turned hammock

11:30AM Boys pop a batch of popcorn and listen in as I read to the younger children.

12:00PM Boys have drifted off, Einstein is back working on his maths, his big effort is motivated by an  assignment and exams due.
Michelangelo reads his Faith novel, St Ignatius Loyola, he climbs into bed to read. 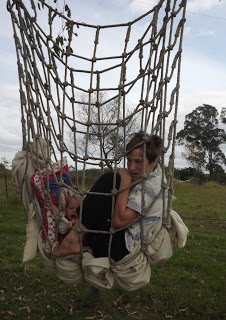 12:45PM Michelangelo is outside playing with siblings again.

2:00PM Einstein breaks for the day.
Michelangelo’s (and 4 other children’s) hair is cut (by me)
Einstein jumping on trampoline again

3:00PM Clean up time.  Each child has ‘area jobs’ and ‘kitchen jobs’ they are responsible for. 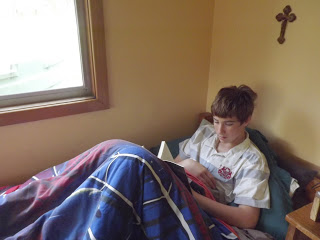