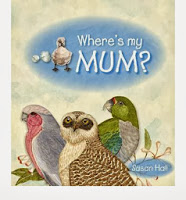 Sharing some recent and not so recent picture bird book reads. Where’s my Mum – Susan Hall
A lift the flap book, that takes the reader on a search as the baby bird looks for his mum.  We meet several Australian birds on the way. Surprisingly informative, lovely illustrations. Recommended. The Best Nest – Penny Olsen
Before the robins begin to build their nest they visit all their friends to
see which is the best design. Each bird feels their nest is the best, but the robins don’t feel any are right for them.  Informative with lovely illustrations. Recommended. The Bush Concert – Helga Visser
The countryside is in drought, the birds put on a concert to cheer themselves up. As the concert draws to a close a storm a storm breaks.  Told in rhyme a huge gathering of wide variety of Australian birds. Rich illustrations. Enora and the Black Crane – Arone Raymond Meeks
A traditional story, Enora lives in a tropical rainforest, the natural world is being created and Enora discovers a shimmering rainbow of colour flying through the forest. His curiosity overwhelms him and he sets out to discover its meaning. Home – Narelle Oliver
I admit to being disappointed with this book, perhaps because the book was set in the city not in the wild, it didn’t capture me and the storyline was rather uninspiring. Tanglewood – Margaret Wild
Quite an intriguing book, very sad and lonely tone.  The Tanglewood tree was all alone on an island, no one stopped until one day a bird was blown ashore.  After time the bird left, leaving the tree even lonelier until one day she returned with a huge flock.  In some ways the poignancy of this book reminds me of Shel Stevenson’s The Giving Tree, without the selfishness of the second character. Illustrations are beautiful. Recommended.