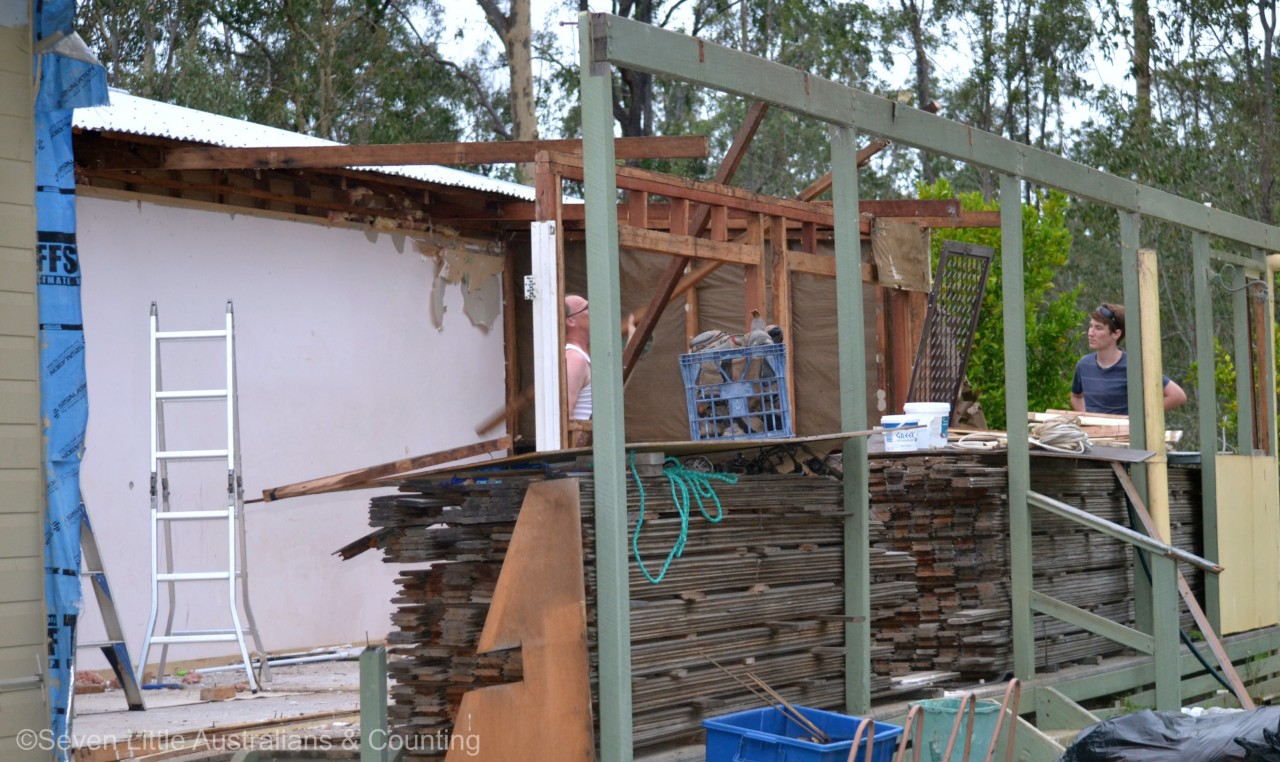 The long, anticipated week has finally arrived, we are re-roofing our ‘old’ house!  The wall frames and trusses have arrived, the beam is in position and only light rain is predicated. In preparation we moved four rooms of belongings, including 8000 books into the other end of the house. PC took the week off work and we are forging ahead. 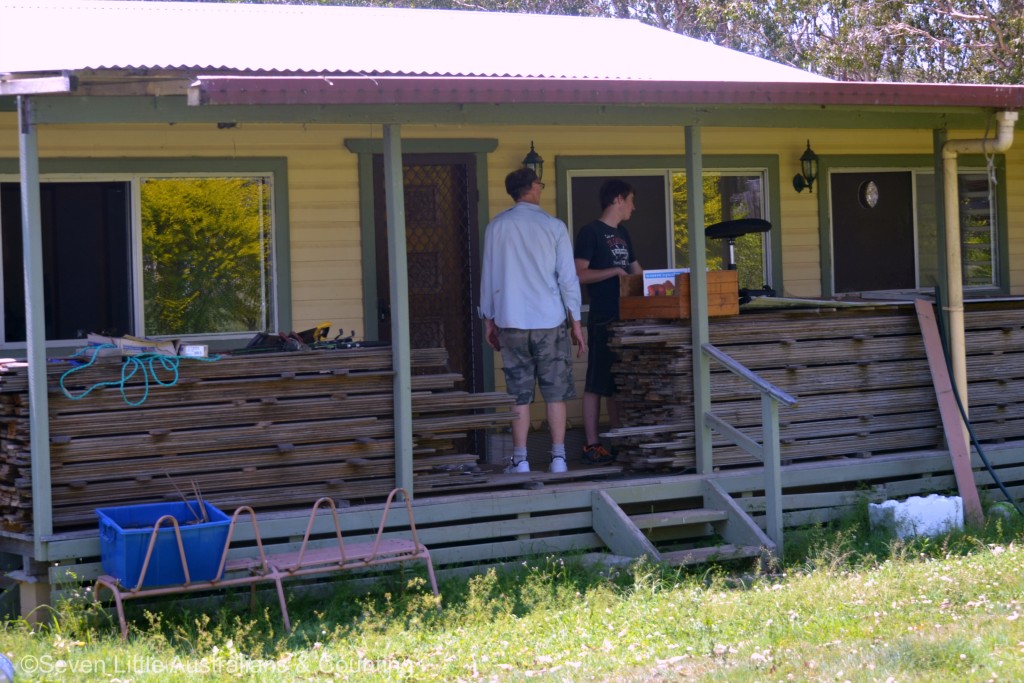 First preparation task was to pull down the front wall, this will enable us to build the wall to the same height as the ‘new house’, resulting in one continual wall and roof line. 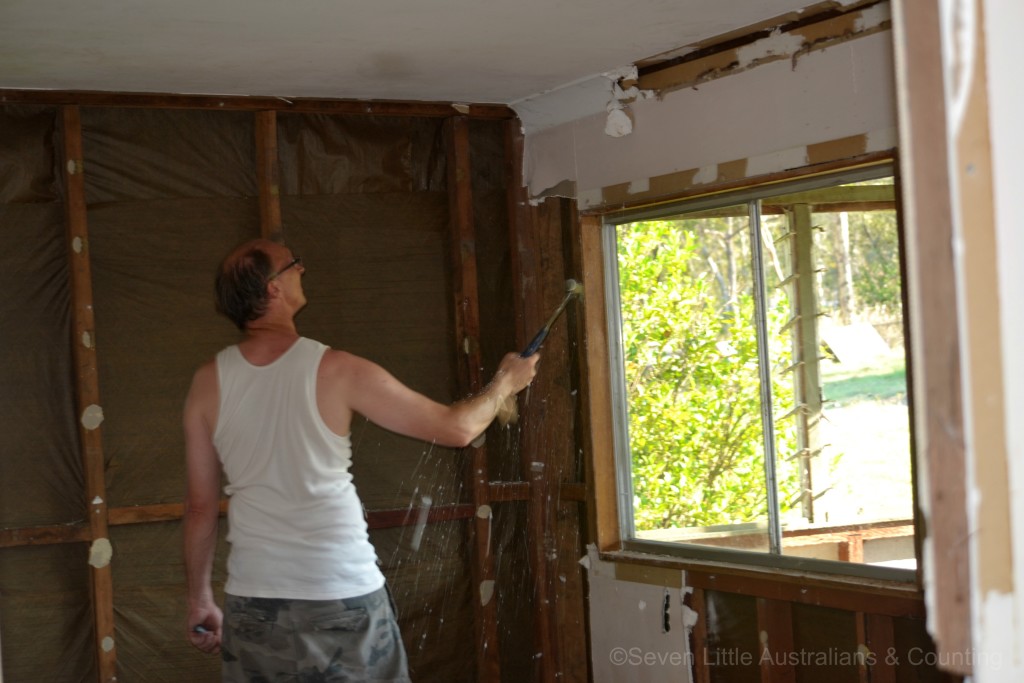 Internal walls of the front two rooms were gutted, previously our study and learning room, but now destined for a different life 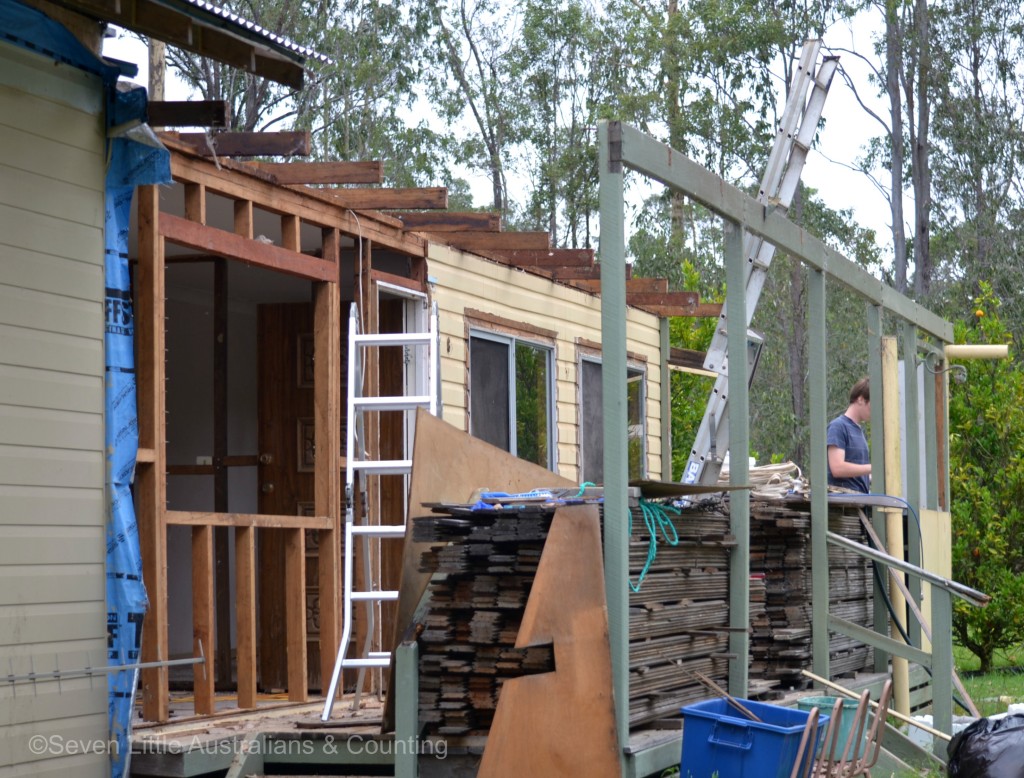 Originally this was a verandah which had been filled in, so the roofline was flat and lower than the rest of the house.

The timber piles? They are the internal flooring that we long ago salvaged from the Convent boarding school, still waiting to be laid, pressure is now to lay them fast to save from the elements, next task, or is it?;) 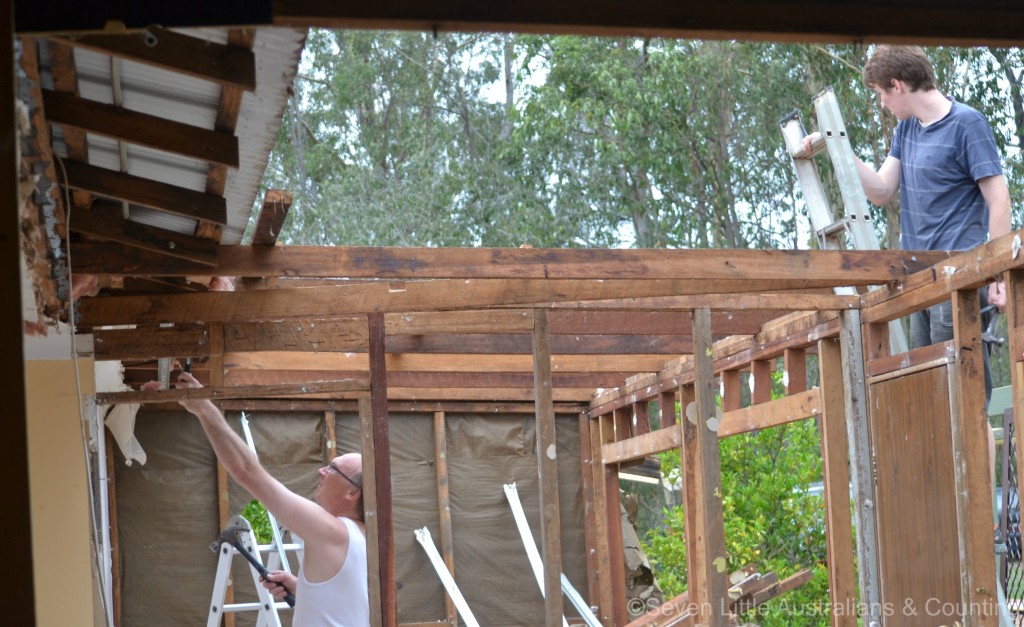 Iron and rafters came off 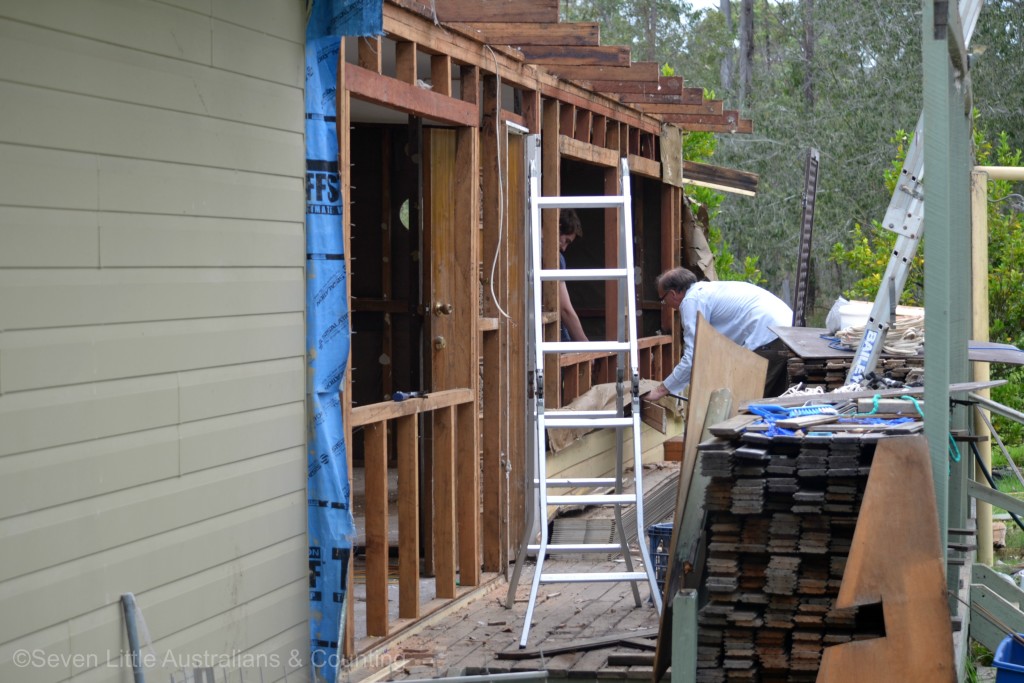 and the wall came down. 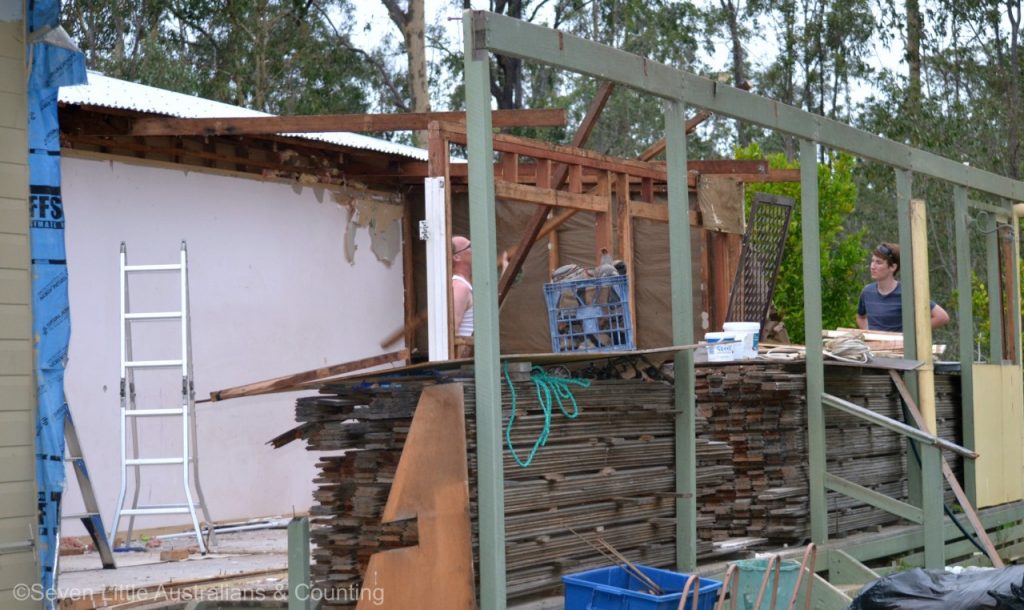 Most challenging were the soaring temperatures. Friday and Saturday the heat was intense with 40C/104F days! We were rising at 5.30am, working until nearly midday, taking a long break over the worst of the heat, resuming later in the afternoon and working till 8pm. Add into the mix dance dress rehearsals and concerts all weekend, attending one of the concerts and Mass Sunday morning it all took a little longer than we’d hoped. 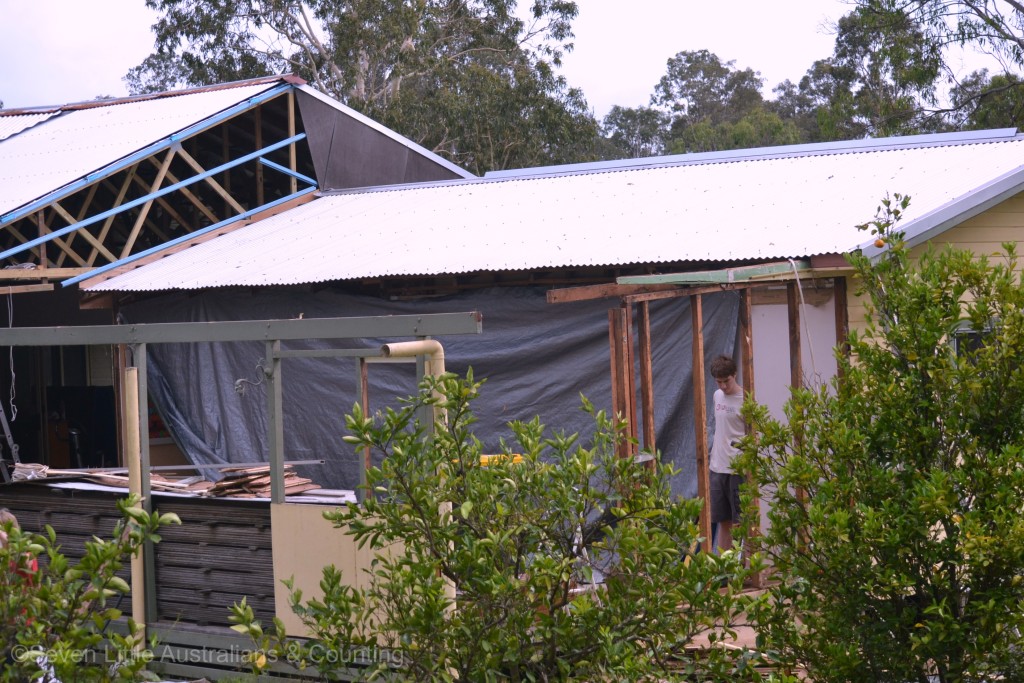 Whilst we appreciated the relief from the heat that rain and hail bought on Sunday and Monday, with the two front rooms exposed to the elements our ceilings and insulation became soggy, which were not pleasant to remove.  The ceiling in one of the rooms behind the tarp has also been damaged so I suspect we’ll be renovating these rooms sooner than planned.  The rain slowed us down a little but we soldiered on and late Monday afternoon saw us preparing to install the wall frame.

Walls Go Up, Roof Comes Down

*Sharing with Nicole and Bec over at The Builder’s Wife