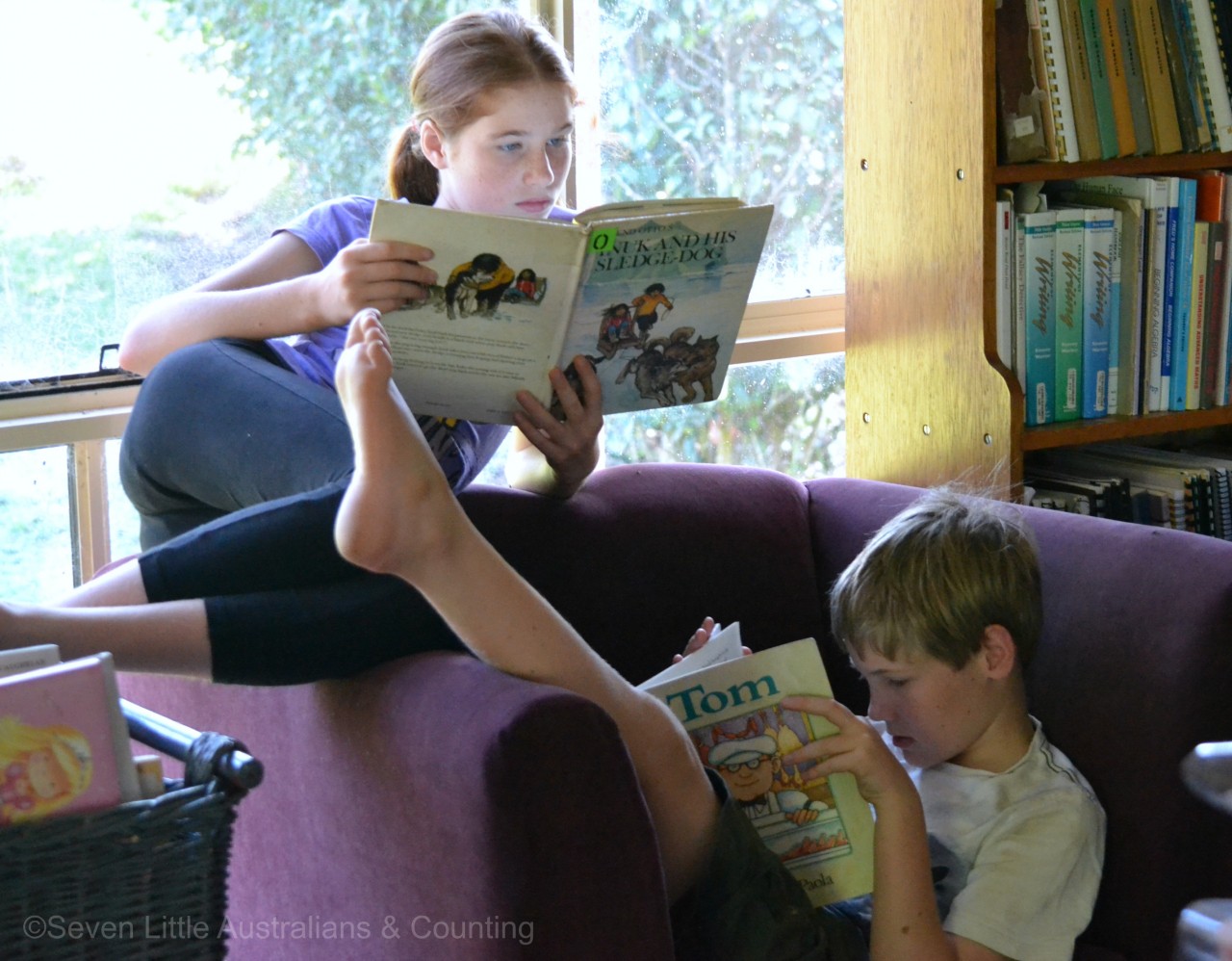 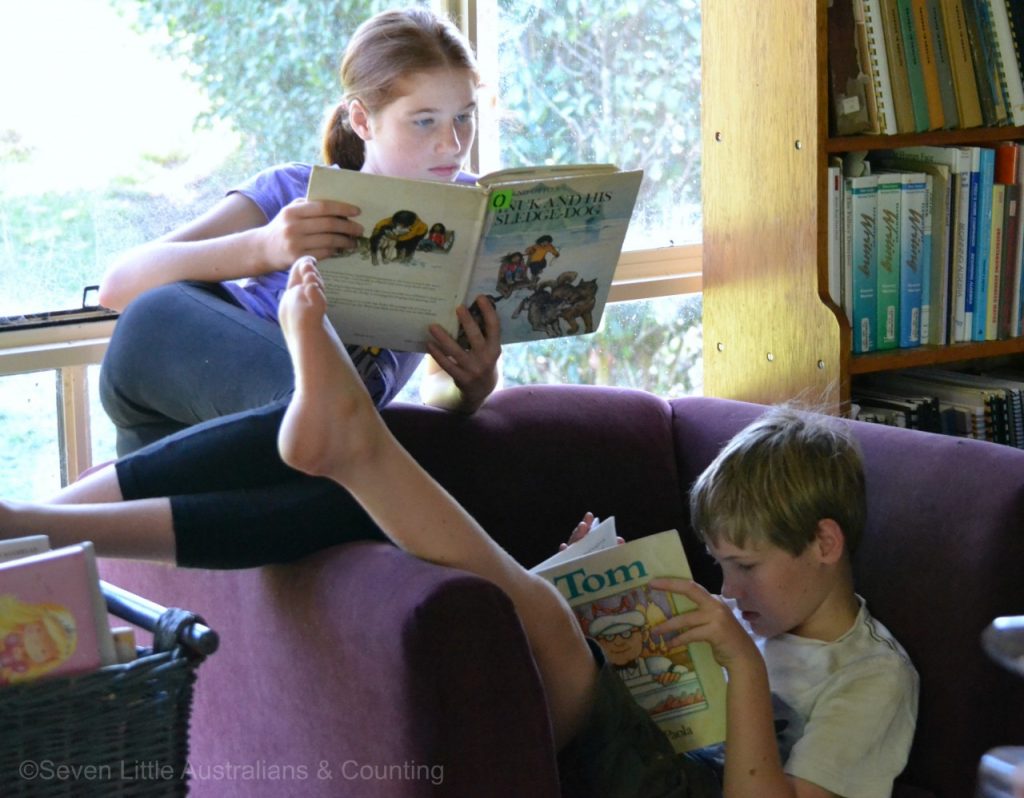 In my previous post KonMari and Large Families I shared the desperation that led me to ‘listen’ to KonMari, how I adapted this method to met a large family’s needs and to what degree I ‘let go’ of many items in our home. It took us a week to blitz the whole house leaving the books till last.  My ‘letting go’ muscles were by now well flexed and it was time to cull our books, all eight thousand of them. How did I do it, what questions did I ask and how did I let go?

Our library is a collection gathered over years, many are inherited from my mother, gifted after she finished homeschooling and her lifestyle changed, most non-fiction are remnants of the season we ran a DK Home Learning business, the majority are from local book sales where all children’s books are free, the odd one from friends, and a smaller number have been purchased.  In preparation for roofing half our home, then gutting it, all of the books were moved out of the library and relocated in the other half of our home. Whilst what books could be placed back into bookcases were, the books from the high shelving were sitting in towering piles about the house, obviously we couldn’t live like this for months, the realistic time for a rebuild of the gutted home. It was apparent it was time to undertake a serious cull. 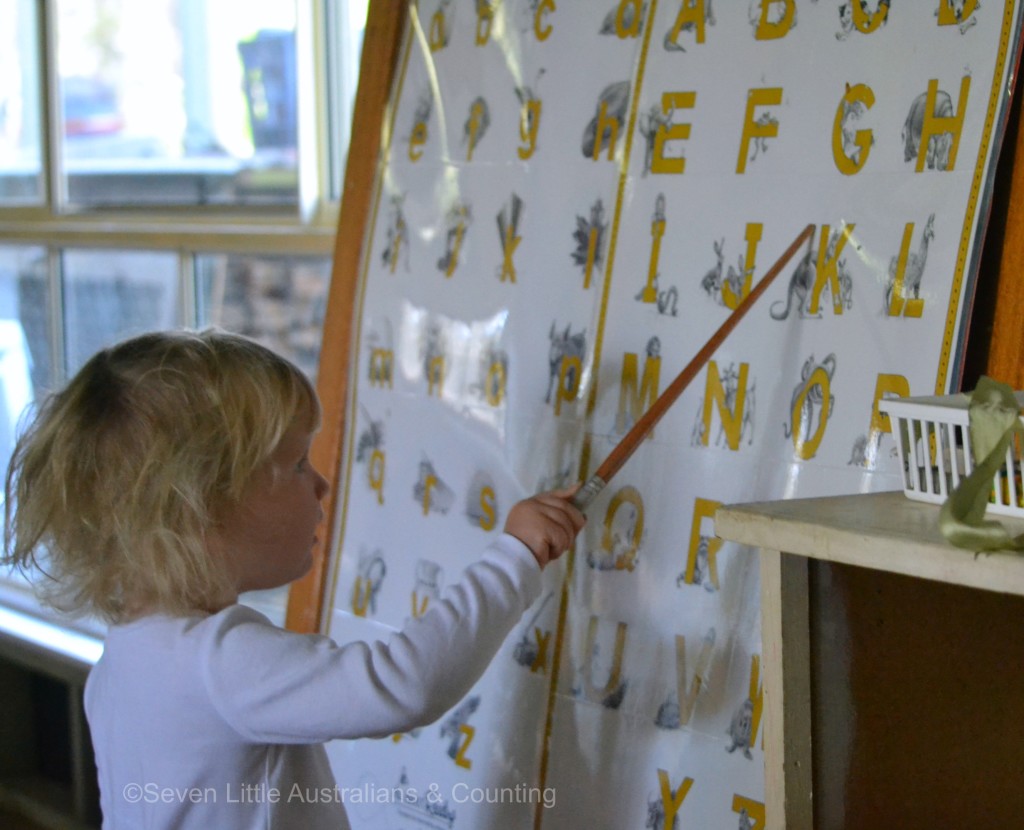 Aside from the homeless book state, for some time I had been conscious that the sheer volume of books was resulting in the children overlooking treasures as they were hidden amongst the mass.  Many wonderful favourites the older children had read, the middle and younger children were not even aware of, obviously this state of affairs had to change. In preparation for culling books the critical component is actually being willing to relinquish them, for bibliophiles particularly it takes time to arrive at this point. In my desperation I was ready to part with books but needed direction, thanks to my friend reading and sharing KonMari I now had a vision and a plan, my ‘letting go’ muscles were flexed and I was committed to releasing any books that my children were not interested in, including books from my own childhood!

The children were involved completely in culling the books, every bookcase they helped assess what we would and wouldn’t keep. We had ten 6ft bookcases to appraise and averaged culling a bookcase a day, hence why it took two weeks to cull the books. Princess(14) was an amazing support and worked by my side steadily. Each day we would pull all the books off one bookcase, lay them on the pool table, on their edges with spines facing up. We would then call the children to come and select what books they wanted to keep.  As they evaluated the books I instructed the children that they were to keep asking themselves; “Is it worth keeping?” Follow on questions included, “Did you enjoy it, do you recommend keeping for a sibling?”  It was mostly the pre-teens and teens who were able to be of assistance, the younger children didn’t have the familiarity with the books nor sufficient awareness of their own reading tastes. As we have many children of all ages, both genders, a variety of interests and genre preferences we still kept thousands of books but I feel confident that the majority of ‘keep’ books were wise choices. 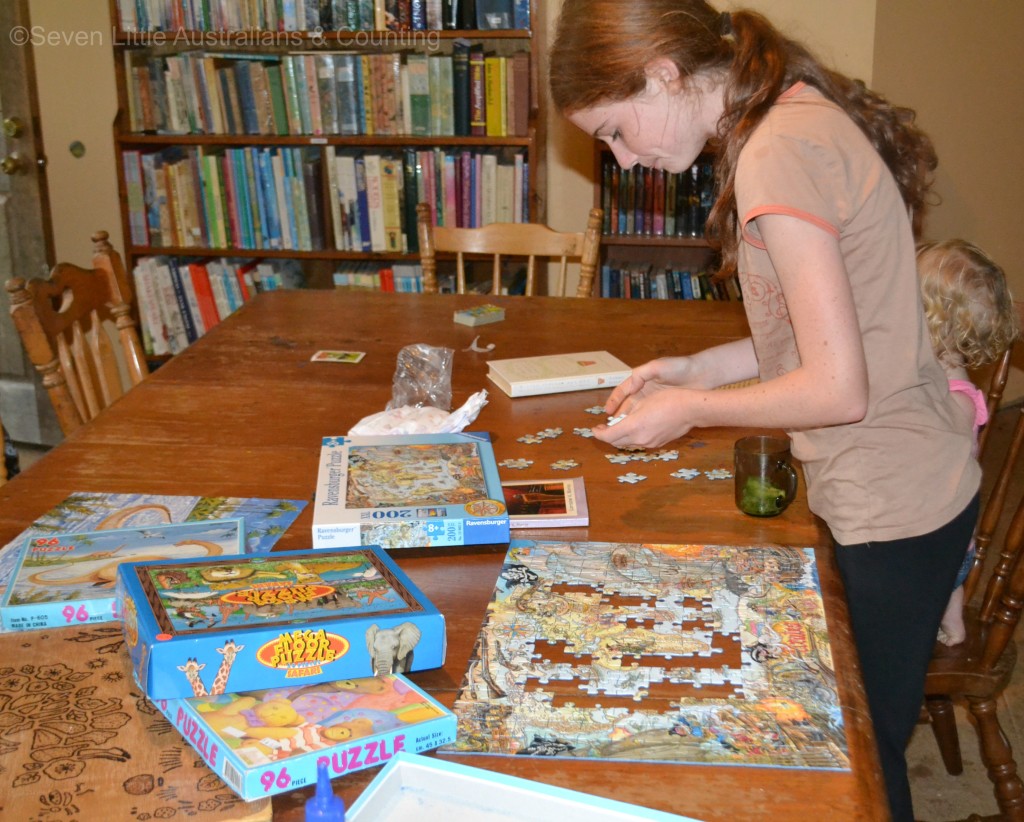 After the children had selected their books, particularly Princess who was quite diligent in perusing each day’s selection, I would then call Anna Maria(22) to come and select what she felt worthy to add to the keep pile. Anna Maria is the most voracious reader in the family with an eclectic taste in genre, she never judges a book by its cover and has read the majority of the books in this house. So when Anna Maria left books in the throw pile stating that; “she couldn’t ‘get into’ it, they were boring or were ‘so,so,’ ” I was confident in parting with them. Even books that were classics or were on recommended booklists, I reasoned that if Anna Maria wasn’t interested chances were nobody would be, if a book hasn’t been ‘cracked open’ in twenty two years then the likelihood it would be in the future was slim. After all the children had made their selections and recommendations, I perused the remainder, I made an executive decision to keep a few of the books left, but released the majority! ‘Letting go’ became easier and gained momentum, a feeling of peace developed.

Our bookcases are organised into categories, we have bookcases for; history, science, geography, Australian, literature sets, fiction for the older children and for the younger, readers, adult fiction and non-fiction, homeschool resources and children’s and adult Faith titles.  The picture books stand upright in boxes, easy to flip forwards and also grouped into categories; geography, history, Australian, classics and many more. We started with the books we found the least trouble making decisions about, the books most often read, the ones we were most familiar with. Some of these were discarded on the basis of twaddle, not worth keeping, though the bulk of these we kept. We then tackled the shelves that were read less frequently or not really at all, many, many of these went, it became easier parting with books. The homeschooling resources I evaluated once I was well and truly seasoned, I still had remnants of books from mum’s homeschooling days, quality resources but I simply didn’t use them, released! The Faith shelves I procrastinated on appraising as it’s hard to part with Faith books but my muscles were flexed and part I did. 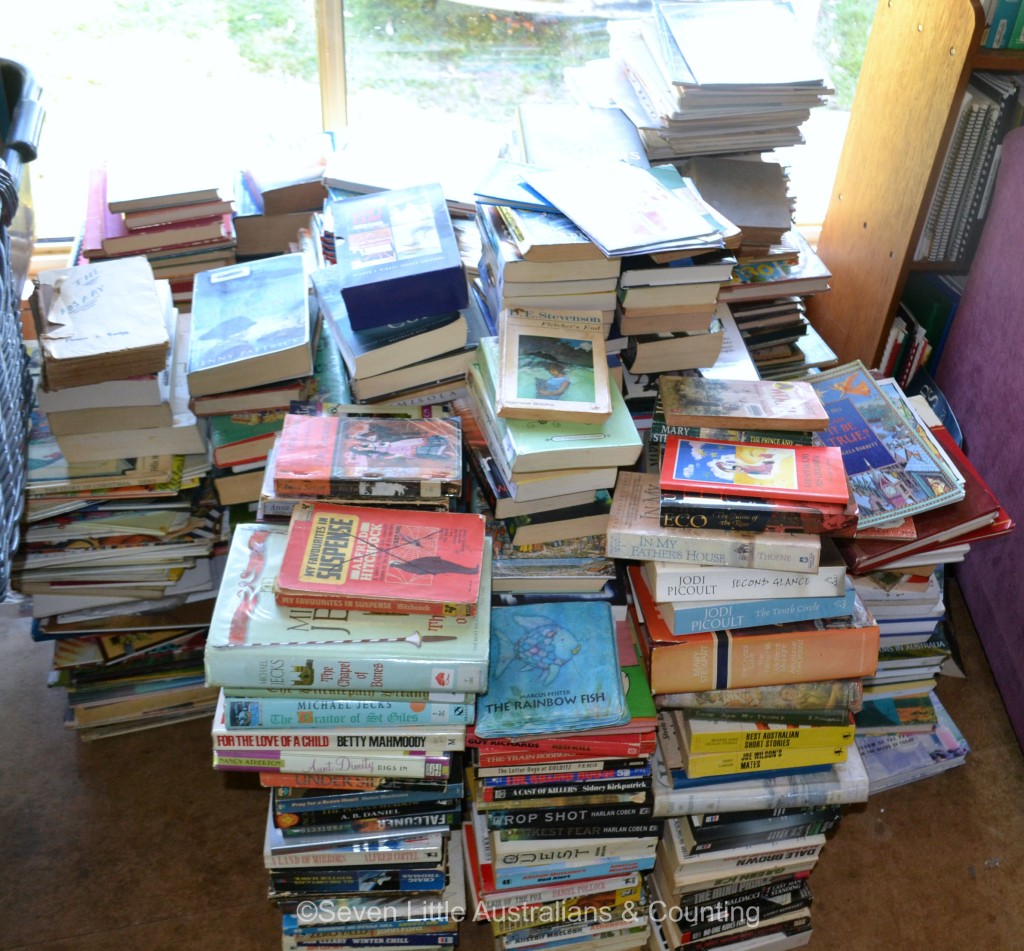 We left the adult cases till last, by that stage PC was ‘champing at the bit’ to contribute and cull his books, KonMari’s advice was true husbands are inspired.  Initially PC wasn’t confident about the book culling, he was anxious lest we give away books that might be worthwhile, but by the time we culled his books he was so keen he gave away an entire 6ft bookcase of books!! All those books that he was going to read in his retirement, twenty years hence, gone! Not to be outdone I was now challenged; those books that were by highly recommended authors I’d had for over ten years and still hadn’t read, clearly I never would. The books with yellow pages, those falling apart, the fluffy books I’d read once, the best sellers I could borrow from the library if I wanted to read again, all gone! A whole bookcase of my books given away too 🙂  We could have been more ruthless in our culling, some of the children’s keep choices wouldn’t have been mine, but I respected their choices, at some stage we may do another cull. I considered not attending any more book sales but that’s not realistic and it’s part of our mother/daughter outings, but I will be far more selective in what I bring home.

In the end I culled eight hundred books!!  After deleting all the books off my book catalogue I sorted the books into categories, placed them in boxes to be easily sorted through and rang a couple of girlfriends.  My friends are as mad about books as I am and they spent an afternoon having a marvelous time sorting through and selecting, they took five boxes of books.  The following day a new homeschooling mama came and I loaded nine boxes of children’s books into her car, for her to peruse at leisure. The remaining five boxes were delivered to the local Rotary Club for their biannual book sale, where the discarded children’s books will also arrive at. 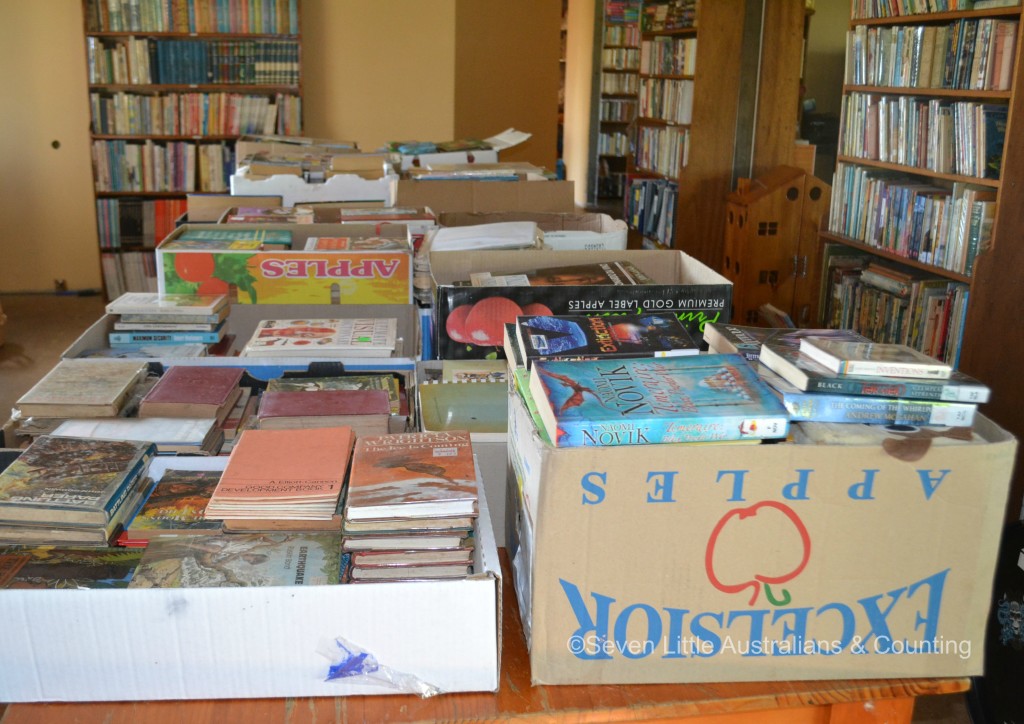 I did it! I successfully culled our library!

Do you have any questions? Big or small, every question is a great question 🙂