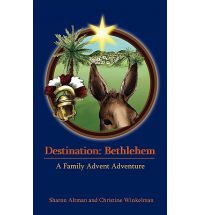 Imagine my surprise and delight when I was approached by the authors of Destination Bethlehem with an invitation to write a review and an opportunity to host my first book giveaway!  Of course being an inveterate lover of books I agreed, though I was worried as to whether I would do justice to a review or not, simply, an honest book review is rather subjective and I know I can be a tough critic. Receiving the book I dove straight in and am delighted to now share my thoughts and impressions.

Destination Bethlehem is set in ancient Palestine, opening just prior to the birth of Christ.  Through the ‘eyes’ of young Isaac and Jediah during their travels we are introduced to all the main ‘characters’ of  the Nativity Story; Zachariah  Elizabeth, shepherds, Mary and Joseph.  With Isaac we travel from his little village to Jerusalem, back to the village and then to Bethlehem for the census, culminating with the birth of Our Saviour.

The book starts with a rather gripping introduction as we journey with Isaac and his neighbour Zachariah to Jerusalem, we focus on Zachariah when the angel appeared to him to foretell the birth of his son.  The authors include interesting historical and cultural facts about Jewish Traditions.

Destination Bethlehem is divided into 24 short chapters, designed to read one per day from December the 1st through to Christmas Eve.  One benefit of short chapters means it is easy to play ‘catch up’ if you fall behind;)  At the conclusion of each chapter the authors include a few interesting cultural facts, delightfully clear, pen and ink illustrations are sprinkled throughout the book.

Would you like to win a copy for yourself? Simply leave a comment on this post to enter.
This giveaway is open to Australian residents only and will close on November 27th.  Arriving just in time for Advent:)

*Any profits from the sales of Destination Bethlehem are donated to a mission in Guatemala.