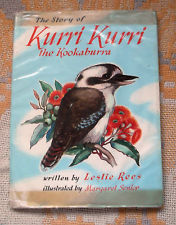 Many months ago I promised Katydid a post on our favourite living Australian bird books.  Katydid this post is dedicated to you, though alas as all our favourites are out of print I’m not sure how successful you will be in finding these in America. Also be sure to check out Jeanne’s list including one in print! Michelle’s Homeschooling Downunder’s Bird List also includes yet more titles.

We’re huge fans of all nature books written by Leslie Rees, though some are better written than others.  Short chapter books with detailed illustrations. The Story of Kurri Kurri the Kookaburra – Leslie Rees
The story opens with the hatching of Kurri Kurri and his siblings on the East Coast of Australia.  Soon his parents are teaching him survival skills, to laugh and to fly.  Alas the day before it was Kurri Kurri’s turn to learn he was stolen from his nest by two men! Thus begins a long journey for Kurri Kurri and a young companion Karloo who are transported to Western Australia. (kookaburra’s were indeed introduced to WA in the early part of last century) Kept as pets in a backyard the young birds encounter surburban dangers and have to teach themselves skills normally taught by their parents. Eventually the birds manage to escape to the wild where they begin building a new life, thus beginning the life cycle anew. (Not one of the author’s best)

The Story of Karrawingi the Emu – Leslie Rees
Did you know father emus do most of the hatching and feed the chicks at the beginning? We follow the adventures of Karrawingi and his family, learning their eating habits, their family patterns and the dangers they face, Karrawingi loses two of his sisters to wedge-tailed eagles. The young must learn grooming habits, how to drum and how to search for food themselves. Karrawingi faces many other dangers besides the eagles, we follow his many adventures with interest. The Story of Koonaworra the Black Swan – Leslie Rees
Whilst black swans are a symbol of Western Australia they are found in the wild all over temperate Australia. Koonaworra is born in a marsh in Victoria, shortly after moulting season Koonaworra grows beautiful black feathers like his father’s.   As the drought worsens the swan colony leave the marshes, in search of food.  Once the drought breaks the colony  once again return to the marshes. Koonawarra however is not amongst them as nearly loses his life enroute.  After several adventures he makes his way back home. One of our favourites. Jeanne

The Story of Wylah the Cockatoo – Leslie Rees
Australia has seventeen species of cockatoos, including the yellow-tailed cockatoo.  Baby cockatoos are big beaked, big footed ugly creatures covered in yellow down and Wylah was no exception.  From this book we learn what cockatoos eat, their habits and the dangers they face.  We follow Wylah from babyhood through to her mating and the hatching of her own fledgling.

Spotty the Bower Bird- ES Sorenson
A collection of Australian nature stories including Spotty the Bower Bird, other bird tales and more.  This is one of our favourites, some paragraphs are rather slow but we skip parts to draw out the best.  Jeanne has also shared more on the background of the author, ES Sorenson.

Thunderbolt the Falcon – C K Thompson
CK Thompson a member of the Royal Australasian Ornithologist Union, has based this novel on the peregrine falcon and the efforts of two boys to train one as a hunting hawk.

Old Bob’s Birds – C K Thompson
Old Bob the Swaggie, a bird lover, imparts his knowledge of the bush to young Roddy and his friend Susan.  He describes the birds with all their foibles, their faults, come says Old Bob are real villains. An Aviary on the Plains – Henry Lamond
A collection of ‘sketches’ of birds of the Outback.  These are of a more serious nature for the junior ornithologist.

Larry the Story of an Australian Seagull – Ina Watson
Ina Watson is another absolute favourite author! Through the main character Larry we learn much about seagulls and follow Larry’s adventures.  The illustrations are in colour and detailed! Silvertail The Story of  a Lyrebird – Ina Watson
A favourite! Once again incredible, colour illustrations. Until we read this book we didn’t know much about lyrebirds, but they are fascinating birds.  Watson’s description of a male lyrebird’s courting rituals is vivid and memorable.  A must read! Jeemuluk The Young Noisy Scrub-Bird – Corinn Wallace Hine
A long picture book about the endangered noisy scrub bird of Western Australia.  Young Jeemuluk ventures forth to sing his song when he is ‘captured’ and relocated to a safe colony.  He finally sings his song. Puddy – Kathleen Henry, Frances Mead & Julie Morris
A picture book about a baby Rosella who is captured and taken into captivity to a pet shop.    Puddy is so miserable he begins to tug his feathers out until he looks tatty.  He is rescued and taken to a lovely aviary with other feathered friends.  He is nurtured back to health and eventually set free into the bush.