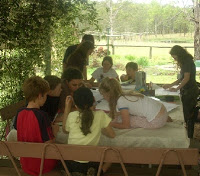 This past week we tried something new, something we haven’t done before; we schooled the whole week with another family. As our house is rather small we set up the ping pong table out in the carport. 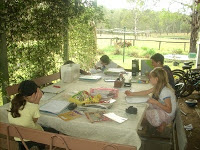 Everyday the R. family arrived at 9am and we started with independent work. Of course there was lots of chit chat, although the children did become more self disciplined about talking as the week wore on, and they realised they weren’t getting through their work.

Working in a big group was rather a different, and positive experience. Except for my oldest daughter, each of my children has a ‘pair’ in the R family, although of the opposite gender. The R. family and ours have much the same philosophical thoughts/practices to education as us. I believe this played a big part in the success of the week.

We spent some time reviewing/teaching some grammar concepts. They created charts with the word and definitions, with many examples; both words and pictures. This particular chart is on ‘Nouns.’ 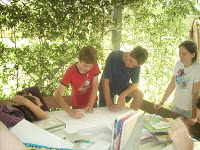 The older children worked on a chart of pronouns. At first there were some grumbles but amazingly the dynamics of a group worked in a positive way and they became rather engrossed.
This was the case all week long.

As well as their independent work we explained to the children that we wanted them to break into groups, choose an interest project of their choice, research it, and present it in some manner in a fortnight’s time. The audience will consist of us all and their dads too.
The groups formed naturally as a few had similar interests.
The synergy of all the groups is incredible, we are totally in awe. With all the groups we are simply the facilitators, they have all had a clear idea of what they are doing and where they are going and how they will get there.

Michelangelo and H chose to study Vikings. First they made a Mind Map, and then using the internet and books gathered information together. By the first evening there was already a page of information printed and handed to the next to carry on, which then came back duly added to the next morning. This involved some emailing and information exchange throughout the week. It reminded me of the Olympic torch bearers. 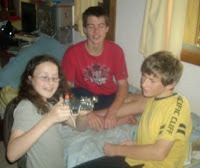 My older boys and G’s project parameters changed a few times. They initially chose electricity, then cars powered by electricity. They have worked for hours on this, building and rebuilding. It has heavily involved team work and discussion, sometimes one pair overrides another, they getting down to the nuts and bolts of it all. 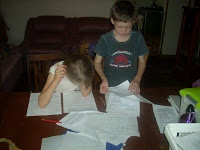 Princess and J’s enthusiasm is so palpable; they have provided us with such fascinating moments, perhaps because they are so young, but they sure are keen! We have taught them a few computer skills along the way, and they are confidently calling up websites, cutting and pasting, typing and printing. They know how they plan on presenting and frankly they are the closet to completion! They have had extra phone calls to discuss it. Princess is beside herself with excitement, literally bouncing up and down, J will not stop talking about it. Their topic?… Well Princess was keen to study well, princesses, but they compromised on…. Meat Eating Predators!

Our older girls chose etiquette with a particular focus on table manners. Much research is going into this; they also are using books and the internet. We are looking forward to presentation night when, after dinner, manners shall be demonstrated, complete with napkins, champagne glasses, and a fish knife. This has necessitated visiting op shops and raiding friends’ cupboards. Apparently the ‘gentlemen’ shall escort the ladies into the dining room for parfaits after dinner and presentation, to practice what they have just heard.

And every spare moment has been grabbed to play endless games of Balderdash. A great game for the study of Etymology. 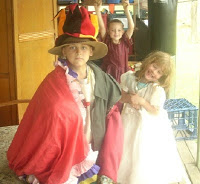 Meanwhile I believe the younger ones have completed a doctorate in playing; endless games of dress-ups and sand play. They played and played (and slept well every night).

They also found some time to paint. Here after listening to a beach story, they are painting with watercolours, and sprinkling salt over for beach texture.

Well Rebecca and I are exhausted, but the children are keen for more next week.