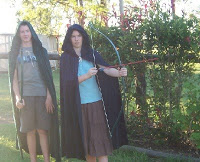 Originally I was inspired by Kimberlee’s Josiah’s cloaks but I made a few adaptions.
For those keen like my friend Charlotte I’ll endeavour to explain how I made ours.

1- Measure from the top of your child’s head to where on the body you wish the cloak to finish. Allowing for roughly an extra 6cm/2,1/2inches for the hood. My children informed me AFTER I made them that they would have preferred full length to the ground as Will’s must be that long to hide full length with his feet hidden.

2-I bought a piece of material, 152cm/60inches wide, (115cm/45inches is sufficient for younger ones) although my younger children’s cloaks are also 152cm wide. I purchased dark green penne velvet as it is very easy to work with, sits well and best of all doesn’t need hemming. My friend Deanne used boardshort microfibre, camouflage design for her son’s cloak.

3-Lay your material flat on the table wrong side up (this means the underside), I found it easier to fold it in half so I had a rectangular shape. It was less cumbersome this way. Measure from the top of your child’s head to shoulder’s and then add an extra 5cm and mark with a texta.
(The following pictures are not of the penne velvet cloaks as I forgot to take pictures as I made it, these are of a silk cloak)

4-Fold the ‘hood side’ under running the marked line roughly 1cm to the right of the foot (use the plate marks as a guide) and sew a straight seam. As penne velvet sits easily no pinning is needed.

5-You will now have your cord casing. Thread your cord through here when finished. I allowed 1metre/40inces per cloak.

6-Still with wrong sides together join the top of the hood together and sew.

7-Turn right side up and fold into rectangular shape.

8- Holding the center front seam of the hood, fold inwards to the back peak of the hood.

9-Then along the center top seam of the hood sew(on the right side) you are sewing through a double layer. So the hood ends up being lined, the cloak isn’t. To be truthful I’m still not entirely happy with the hood and am considering adding some more anchoring stitches.

10-The first cloak took the longest the subsequent ones where made under half an hour. And I have some pretty happy children.

Do let me know if I haven’t been clear enough and I’ll endeavour to explain more.

This last picture was taken on New Year’s Eve, most of these children are Ranger’s Apprentice fans and they are encouraging those who haven’t read the books to do so!
The pretty colours are the girls’ Narnian/princess cloaks, more pictures to come of them.