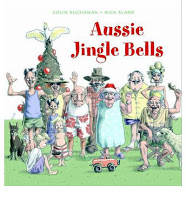 Our Aussie Christmas collection is quite small, however I’m developing a latent fondness for Australian Christmas books.  The Australian humour depicted in many books could perhaps be seen as rather irreverent by some.
*Some of my higher stars, may not rate the same for non-Aussies, the humour is often cultural.

Aussie Jingle Bells – Colin Buchanan
“Dashing through the bus, in a rusty Holden ute,
Kicking up the dust, esky in the boot.”
Written to the tune of Jingle Bells, a pretty accurate depiction of many an Aussie Christmas day across the nation. Illustrations rather humorous.  4 Star *Not certain the *Aussie-ness* would be to all readers taste

Gemma’s Christmas Eve – Colin Thiele(OOP)
Written by prolific Australian author Colin Thiele, this book claims place on our shelves due to its ‘Australian focus’.  Christmas Eve and Emma helps her mother bake and cook in preparation, feeding the insects and birds as a Christmas present with the leftovers.  Having a book set on a farm in the Southern Hemisphere is most appreciated, a welcome relief from snow backgrounds which are not our experience.  However it tends to miss the Christmas message mostly.  3 Star 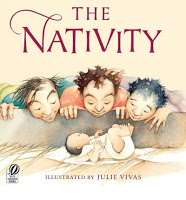 The Nativity – Julie Vivas
“In the days of Herod the King, the Angel Gabriel was sent….”
To the exact words of the Bible, Julie Vivas(Illus. of Possum Magic-Mem Fox) has illustrated each scene of the nativity story. Initially I found the pictures rather ‘irreverent’, they are not your more traditional soft pictures.  However PC is most enthusiastic about the book and has led me to see the subtle layers drawn by the illustrator that I had previously missed.  If you look past the non-traditional pictures you note the comforting of Gabriel to Mary, the gentleness of Joseph, the immensity of people for the census, the joyfulness of the angels, the awe of the shepherds.  PC’s rating 5 Star, I’d now give it a 4 Star 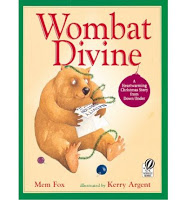 Wombat Divine – Mem Fox
Wombat loves the Nativity Play, but is selected for none of the parts until… Emu selects him for the star role!
Full of lots of Aussie animals, with a lovely ending. 4 Star