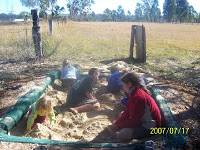 Since we have moved here we have a long list of ‘to do’s’ and a small amount of time. Sounds familiar I’m sure.

One of the to do’s was to build a sandpit. The younger girls particularly miss items from our backyard in town. The pool and swings head the list. I thought a sandpit would be a great start to our ‘playground.’ Months had passed though and still no sandpit until… One day Carpenter decided it was a project he could undertake.

First he selected a spot under the lone tree near the house that provided shade and wasn’t a gum. I was worried about those ‘widow makers’ dropping their branches on my darling children. He then staked out his pit and started digging. By then his brothers became interested and pitched in and helped. (Alas I wasn’t up to speed and didn’t take any photos of the work in progress:( ) Once the pit was to the boys satisfaction, they headed off down to the bush with the wheelbarrow in search of suitable spilt logs to line the perimeter of the sandpit. Once they had dug them into place they lined the pit with shadecloth in preparation for the sand. Finally Prince Charming managed to find a moment to pick up a couple of loads of sand and now the children have a sandpit:)

They are spending many hours in it and are rather reluctant to come in for table-time as they want to play in the sandpit. Making amazing creations. 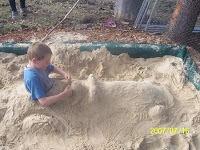