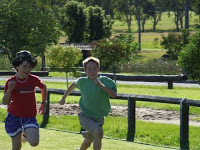 About ten years ago our local home educators group hosted its first ‘Picnic Race Day’ way back when Koala was not yet school age. We had races, novelty events and treasure hunts; as the children grew older and the group bigger we evolved into a more traditional sports day , still retaining the novelty events.

Yesterday saw us once again gathered together. It was a lovely winter’s day, the sun was shinning and the skies were a clear blue. Thirty-eight children gathered together to enjoy a day of sports and companionship.

We started with sprint races for the various age races. Michelangelo gives it all he’s got here. After the sprint races we divide into colour teams for the baton relay (forgot to take a photo of this) Teams consist of all children from 2-15 years, a very exciting and popular part of the day.

The long distance races were next. The under 5s ran 400m, the 6-10s 800m and the over 11s completed 1200m. The majority of the children participated in this event and we had some surprising results yesterday. Jelly Bean nearly lost her long distance title to a new entrant only the little darling burnt out at 200m. Jelly Bean managed to retain her title. 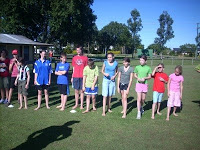 Eight year old friend JR. won the Intermediate race and his sister HR. achieved her heart’s delight by beating our Michelangelo by a hair’s breath. Well done H! Michelangelo came second in the boy’s heat and HR came first in the girl’s heat.Our Princess was a surprise winner by coming second in the girls race proving that slow and steady can win the race as she persisted and ran those two massive laps and finished the race! We are SO proud of you sweetie.

Carpenter was given some serious competition by the McD twins who had an awesome performance and were not that far behind him, considering they are two years younger and much shorter it was even more impressive. Einstein came in second in the boy’s heat and Koala placed fifth.

There are no photos of the finish races as Rebbecca and I are too busy chanting rap beats for each of the children. I promise Rebbecca, next year I’ll buy some pom poms and we can seriously embarrass our children.

For field events the children are divided into age groups and rotated through discus, shotput, long jump and javelin. We have a wonderful group of parents who volunteer to supervise these activities and we are so grateful to them, particularly to our band of four men who year after year are our unsung heroes. Thanks Paul, Al, Murray and David. A special thanks to David who spends hours before each sports day organising the paper work to ensure a smooth run. 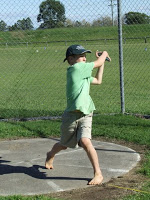 For the first time in years I managed to snap some photos of my children. Although these two shots of Michelangelo participating at discus are credited to my friend Louise, thanks Louise. 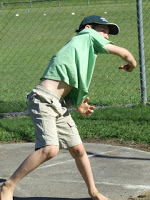 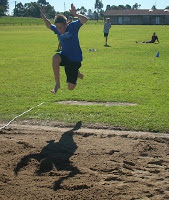 I was very happy to see these two long-jumps of Einstein and Carpenter’s. Aren’t they awesome! Carpenter’s jump placed him at 4 metres! Einstein was close behind at 3.7m!
Thanks Braedon for the camera tips, I was thrilled that I managed to snap such great action shots. 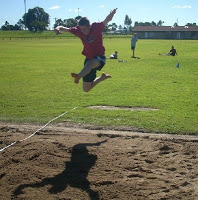 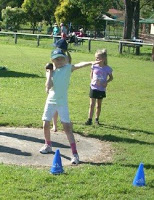 Princess gave it all she had and secured a third place in the shotput. 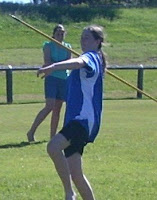 Of course they do graduate to the bigger javelins. Koala looking very stylish here managed to place second.

Novelty Events are very popular with the children and are not too be missed. We started with three legged races. Jack Jack and friend JR. have a new style of completing the course. I thought it was rather inventive on JRs behalf. 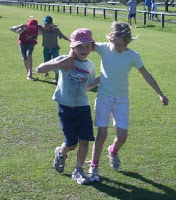 Princess is pictured with her friend NL. 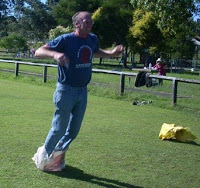 Sack races are very popular too, by this stage PC decided he’d join in with the big boys. Isn’t he precious:)

We concluded with the Tug-O- War, which is a hotly contested match between the three teams. As I have children on all three teams; green, red and blue I barrack for all.
However this year the children had a twist and insisted on competing against the mothers

. We won the younger children against the mothers comp. but our hands were smarting which is why we lost the next comp against the older children; and of course when we were pitted against the dads we had no chance. A highlight of the day for the children was seeing their mums land on the ground. Lots of fun.

A special word of thanks to Rebecca for all her fantastic effort on collating the scores and organising the achievement certificates. And thank you to the whole team, well done ladies and gentlemen.

A truly great day, a fantastic group of children, wonderful companionship, our best Sports Day yet.