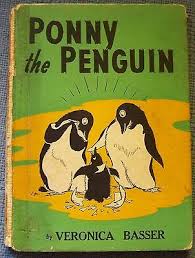 How can it be six months since I last shared a book review! Rest assured that we love books as much as ever, so many books I’ve intended on sharing but alas when you don’t ‘seize the moment’ the momentum is lost.  Trying also to ‘tone it down’ a little for my readers who weren’t keen on too many book reviews.

Today I’d love to share Ponny the Penguin by Veronica Basser with you, Ponny has long been a part of our family culture. I first read this gem to our adult children over a decade ago, enjoyed it with our ‘middle set’ several years later and now have delighted in introducing Ponny to another three of our children this week. I daresay I’ll be reading it for a fourth time to our youngest ones in a few years time.

Ponny the Penguin is an absolute treasure, a jewel among ‘living books.’  Ponny is an Adelie penguin from the Antarctica, we follow Ponny from her birth, through her childhood to her own ‘marriage’ to the birth of her own ‘child’, the full circle.  Along the way we learn a great deal about Adelie penguins;  their parenting practices, how and what they hunt and how they feed their young, about their environment, the dangers they face from sea lions and killer whales, their migration patterns, their ‘marriage’ and nesting habits and more.

Appealing, humorous and informative, the perfect combination and on our children’s list of ‘must have’ books. Ponny was written in 1948, so I’m not certain about copyright, sadly I also haven’t been able to source any 2nd hand copies online, however next time you are at a used booksale be sure to keep your eye out and if so lucky as to spy one, grab it with glee.