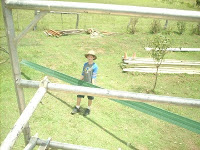 Last Saturday, PC and I were up before 6am determined to have the fascia boards up in a matter of a few hours. As it happened this was just not meant to be. Not only did attaching the fascia brackets take longer than estimated but PC still had the valleys on the porch to finish.
He continually muttered that there was sure to be some secret tradies method that was faster, but not being in the know he had to plod along. 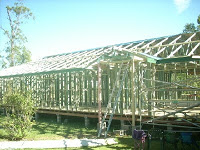 The children spent some of the morning fencing with our friend Dave B. in an effort to keep some escapee cattle in. (The cattle belong to Dave)
The fascia was finished just before lunch. 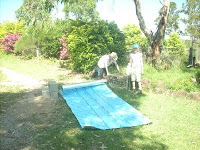 It was so hot. We started back late in the afternoon. The children were tag teaming, Michelangelo and Princess working together here, but poor PC received no break from the heat all day. 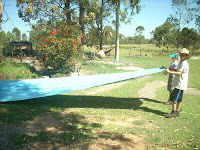 Saturday afternoon we began covering the south side trusses with sarking and battens. 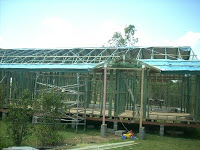 Sunday was a long day, in the afternoon we were deluged by hail, but we were so blessed as the worst of the ferocious storm missed us. Friend Dave’s silo was twisted and crushed, their trampoline mangled and found in a neighbouring property.
Had the brunt of the storm hit us we would have lost the roof. 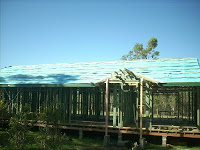 PC took Monday afternoon off and we finally finished the sarking. 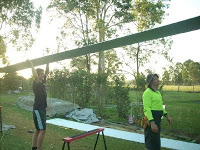 By 5pm we were ready to started roofing again:) My brother Dominic broke up his holiday to come back and help. He is such a sweetie:) 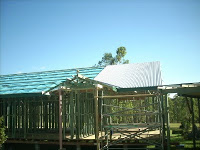 By dark(8.15pm) that night we had finished to the peak.
Dominic left again the next morning but we appreciated his help. Thanks Dom. 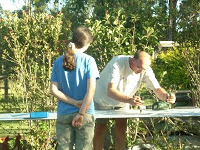 Koala took over working alongside her Dad. The plan was to work evenings after work through till dark, giving us about 2-3 hours of daylight. 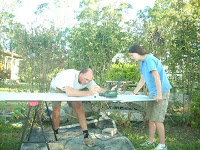 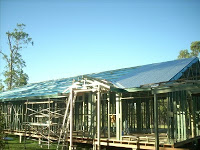 By dark Tuesday evening they finished to the bottom of the next valley. 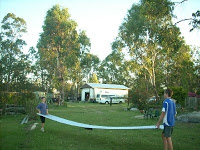 Wednesday evening PC and Koala had a straight run and managed to sheet half way along. 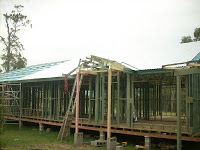 Tonight they finished:) They became faster and finished an hour before dark. 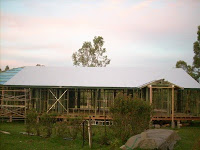 The hip is still to be done and we imagine it will take some time with all the cutting.