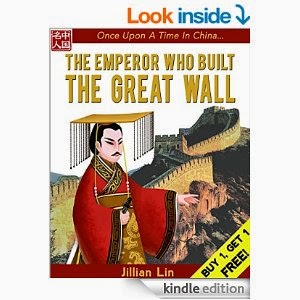 When Jillian Lin asked me if I would like to review a copy of her new book The Emperor Who Built the Great Wall of China, I was intrigued by the subject matter, and highly honoured as is the first time I’ve been approached by an author to review her book. (Though I have been asked previously on behalf of two authors.)

A fascinating picture book that introduces children to the first Chinese emperor, whilst easily understood, the book is packed with information. We learn how the seven kingdoms became one, of the unity Emperor Qin Shihuang bought to China through the use of one coinage and one writing system, of how he built roads and rivers. Yet we also learn of his cruelty to the people and destruction of all books. It was under Emperor Qin that the Great Wall of China was built in which more than one million men died during its construction, he also built a massive underground tomb for himself for after his death. The book concludes with yet more facts and a test your knowledge section.

As a huge fan of picture books, I was excited to find one on this topic and I highly recommend it.  Available at Amazon for only $3.15.  Ms Lin also has more books scheduled for publication on China so be sure to check them out.