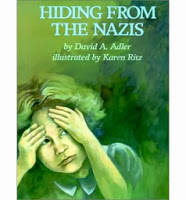 *Denotes book is from our local library for the benefit of my local readers.

*Hiding from the Nazis – David Adler
The true story of a young girl who was ‘hidden’ with a Christian family in Holland during the Nazi occupation of WW2.  Lore Baer’s family had escaped Germany a few years before and believed they were safe in Holland.  When the Nazi’s invaded Holland they had to go in hiding, for extra protection many families split up, children separated from their parents.  After the war Lore’s parents came to take her home but they were strangers to her.
This was an incredibly well written book on a deep topic, we discussed many new concepts; Nazism, the War, Jewish persecution, concentration camps, the bravery of those who helped. 5 Star 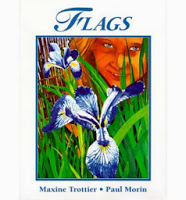 Flags – Maxine Trottier
Young Mary is helping her grandmother’s neighbour Mr Hiroshi to take care of his garden.  A Japanese garden with each object thoughtfully chosen.  After the bombing of Pearl Harbour Mr Hiroshi is taken away to an internment camp and he never returns. Mary strives to find a way to preserve his garden.
Difficult topics to understand; racism, the internment camps, the seizing of property and deportment of American (and Australian) citizens after the war. 4 Star 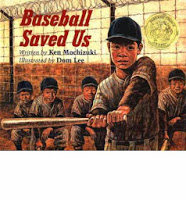 Baseball Saved Us – Ken Mochizuki
A young Japanese-American boy and his family are sent to an internment camp during WW2.  In an effort to change their desolate surroundings a father and son engage their fellow internees to build a baseball diamond and form a league.  All contribute and it helps overcome the feeling of despondency.  It reinforced many of the topics we’d discussed with Flags and bought home the conditions and moral of the internment camps. 4 Star