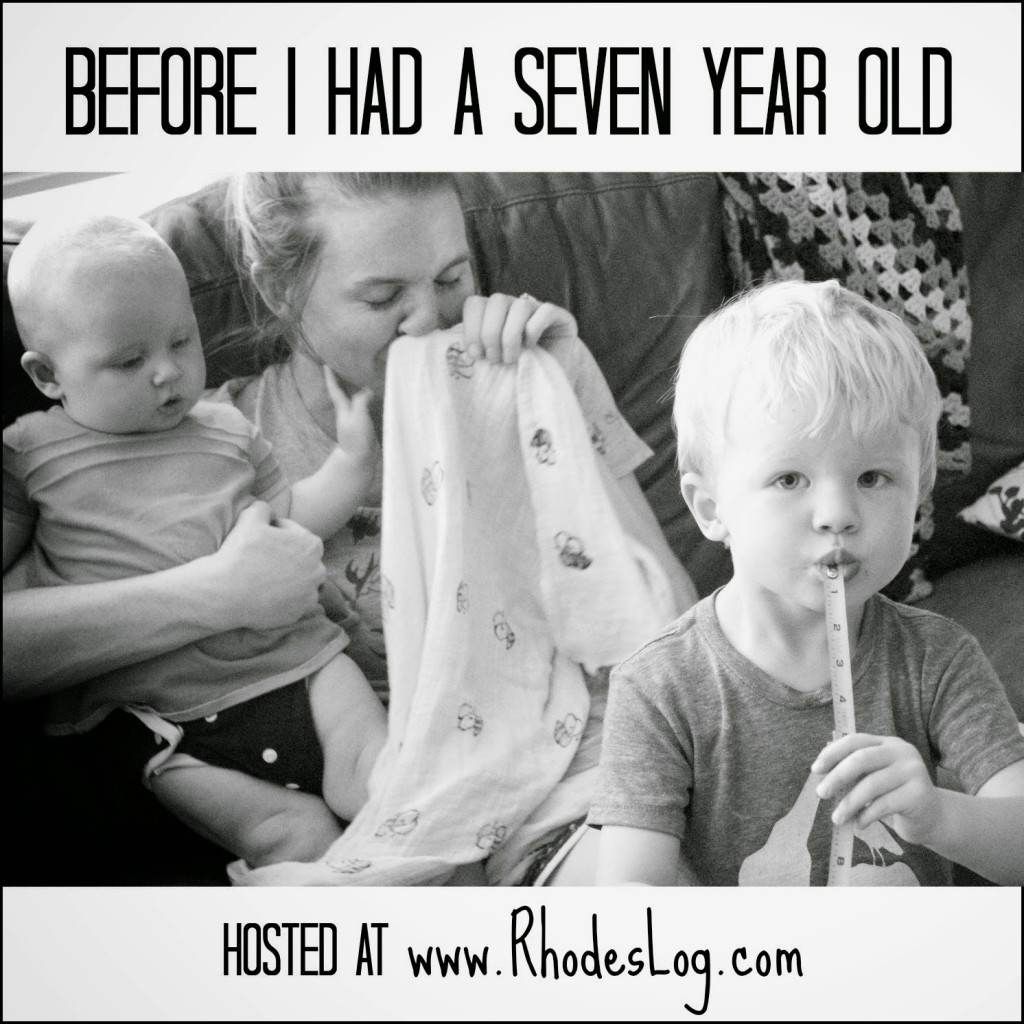 Kate has asked mothers of older children to share what it was like ‘back in the day’, back when all their children were under seven. So heading down ‘memory lane,’ sharing a few recollections of those years.
We are blessed with ten children and one whom awaits us in Heaven. Our girls are; 21, 12, 10 & 8 months. Our boys are; 19, 17, 15, 8, 5 & 3. Once upon a time, many years ago we only had little ones, they were special years and they were stretching years. 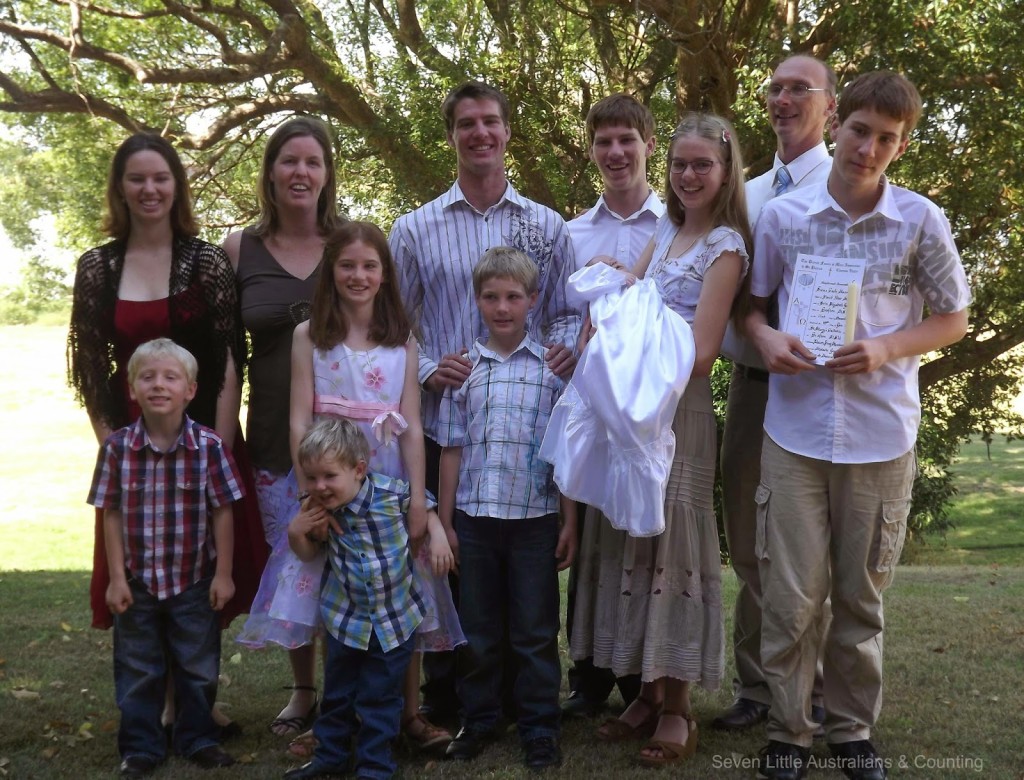 When our oldest was six we had four children, they were 6, 4, 2 and a baby, and life was actually becoming easier. The winter our fourth child was born is one I look back on with fond memories, it was a ‘picture perfect’ winter in which the children and I spent most of the time snuggled together under a doona on the lounge reading Beatrix Potter for hours and hours. The truth is any phase of our lives has seemed far easier compared to the years in which we had three under four, our four year old was easy, but our two year old was a handful and the baby had colic/reflux and screamed and screamed and screamed.  It might seem funny to say that life with ten children is easier than life with three but it’s true.  Never since have I known such sheer exhaustion and felt regularly that my life was totally out of control, ‘little’ details seemed so insurmountable, everything was an effort. We had no local family support, our parents lived a couple of hours away and my Prince Charming worked long, long hours, sometimes coming home for tea and going back to work again until the wee hours of the morning, a few times he even pulled all nighters!
The overwhelming feelings were balanced with the fact that we lived life at a slower pace. It was a time of making solid friendships, our friendships forged in those years still continue today and those friends share pieces of our lives that forever entwines us.  Nursing Mother’s, Playgroup, Mother’s groups at Church, morning tea with friends whilst children played together, these times were imperative to sanity. Talking to today’s young mums I’m not certain this rhythm happens as much and it saddens me, they are missing a sense of community.
It was a time of really immersing ourselves in our little ones’ world, focusing on their joy and wonder as they discovered the world around them.  They baked, we read, they dug in the dirt, swung from trees and played hide-go-seek, we played make believe games, they explored the world around them and we had charming conversations. We enjoyed focusing on the world from the viewpoint of only little people, having only little ones is a precious time that can never be recaptured again. We still have little children and enjoy watching them discover the world around them, but there are now more distractions as we are also busy navigating the world from the eyes of older children as well.

When we only had little ones every undertaking was mammoth; getting out the door, loading up the car, arriving at Church in a timely manner, visiting the shops, morning tea with friends, many details were involved and they loomed largely. It became easier to load up the pram and walk to the shops and Church rather than struggling with car seats and the pram.  I certainly became fit and the loaded up double pram ‘clocked up frequent flyer points’. By nature I’m fairly laid back but I always found dinner prep and bath times stressful when we had only little ones, this time of the day involved a lot of juggling and it was a challenge. As the children grew older and their ‘hands’ were available it got easier, but we ate far more pizza than was healthy back then.
As the children grew life became a little easier, they were able to help in small ways, they learnt to clean up after themselves (of a sort and some better than others;) most importantly they entertained siblings (no longer did I daily have to play make believe games, oh yeah!) and we began to have meaningful conversations. Today I no longer have to take all the children with me wherever I go, whilst I still often have a child or two with me I can duck out leaving teenagers in charge, most life changing recently with an adult daughter at home is I have even left our baby a couple of times!
PC and I were blessed to have been raised in large families and as I was the eldest of eight over a twenty year age span I was most familiar and comfortable with many aspects of parenting. I’d been fortunate in seeing my mother breastfeed my siblings for extended periods of time and breastfeeding to me was a comfortable and familiar part of being a mother. We have always consciously focused on developing independence within our children, this has been a major decider in much of our parenting approaches and choices. Though being a sibling certainly isn’t the same as having your own children I did enter parenthood with experience and confidence. Parenting ten children ranging from twenty-one to eight months has its own challenges; the early years stretched us personally and physically, the middle years stretched us mentally, and the teen and young adult years are stretching us spiritually.
Parenting has been a wonderful journey of falling in love with our children and of self discovery. Although sometimes I long to go back and give a little advice to my younger self, I’d encourage myself to focus more on our, my husband and I, relationship, reassuring myself that our children won’t suffer for spending a few hours occasionally with a trusted babysitter and about ‘at home date nights’. I’d also let myself into a secret, that making sure I nurture myself doesn’t mean I’m selfish, it means if I’m nurtured then I have more to give to my children.  Mostly though I would tell myself the years will race by and you will never have this time again, I’d tell myself to hold onto these years, to treasure and savour them.