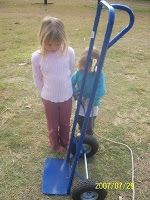 One of the wonderful things about having children is having a legitimate reason to once again play with the toys of your childhood.

On the weekend Prince Charming, Carpenter and Michealangelo tackled another project on the ‘to do’ list. Building a billycart. PC has toyed with this idea for some time, especially since we have moved to this property. Our friend A, recently suggested his idea of converting a trolley.

After careful thought PC worked out how to tackle the project. He purchased a trolley, some wheels and axle. Once the trolley was laid down he drilled a hole in the top/front part and attached the front wheels and axle. Then he laid a board on the base to sit on. 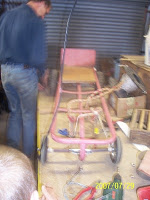 After this it was taken out on the hill by willing ‘test pilots’. 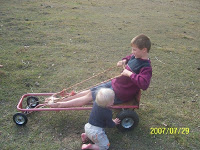 Even Jack Jack thought he was up to the task. 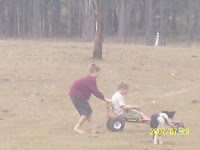 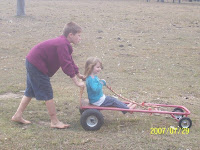 After trialling the billycart it was decided that there was too much instability in the steering and this was caused by the difference in wheel size.

So once again back to the shed for modifications. Wheels were taken off the second trolley and placed on the front. Some other modifications took place regards the swivel component as well. Also for comfort an old computer chair was pulled apart and the seat and back now have cushioning. PC and the dc assure me that more modifications are planned for the future. They wish to replace this seat with a bucket seat once we find one. The stability has improved and the children are thoroughly enjoying their new playtoy. 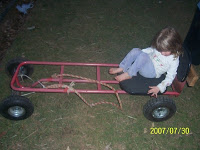