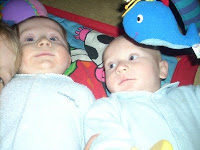 Late May found us; Jem and I starting on our trip South to our dear friends Gae, Stephen and family; PC accompanied us as far as Sydney. We spent the night in Sydney with family and meet our new nephew Shaun. Actually PC had already met Shaun but I hadn’t and of course to see big sister Aimee, and Paul and Leanne. He is a gorgeous baby, younger than Jem by six weeks but heavier by 3kgs. (Jem is on the right)

Sunday afternoon found us flying to Tasmania, this was my first time to the state. Truly to my surprise I felt rather discombobulated rather as if I was in another country, something about crossing the Bass Strait, the distance was very real. I was rather reassured to see gum trees. We were met at the airport by the family, we were so excited to be there (actually Jem took travel in his stride) and thankfully they were rather excited to see us too. 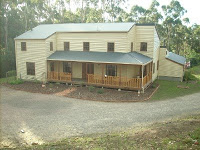 It was another hour trip to their town, the house was huge. I was treated like a queen, a poster was waiting to greet me in my room, a gift of soap and book were awaiting on the bed, chocolate powder awaiting in a teapot, towels on the bed, flowers and a candle. I learnt a lot about hostessing whilst visiting, I felt very treasured.

Here is our gorgeous girl Arwen who we had traveled so far to see. She is just loved to pieces and it is rare to see her out of arms.

Whilst I was enjoying events such as Movie Night phone calls from home told another story. Rain absolutely teemed down the whole week I was away and the town was threatened by flood. PC was busy ringing friends and checking their status and offering emergency accommodation, many friends were stranded. 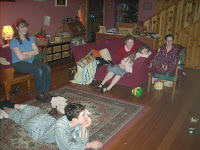 Then came the call that the City had been evacuated and was due to go under that night. The levee walls are 8m and the River was set to peak at 7.8m at midnight and could well go higher. Fortunately the River did not go as high as expected and peaked at 7.3m. Towns further south fared worse and did go under. The Highway was cut for several days and food had to be dropped in by helicopter to some nearby coastal towns. 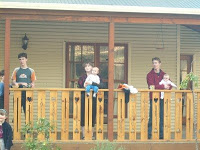 The week held many special days including Ascension Thursday. Part of our celebration included blowing bubbles. 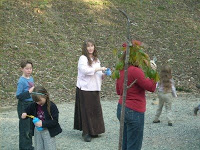 The children also made kites, however it was not a windy day. 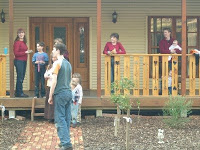 Despite all predictions the weather was quite mild for the week.

This special little girl had a birthday whilst I was visiting and I was privileged to share her day. I enjoyed experiencing different family traditions; gold stars, present bag, a felt crown, banners. When I told my own little Princess back home she wanted us to embrace these traditions. 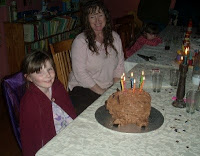 Another family tradition; cake. The ‘Cherished’ children are keen for me branch into cake decorating and I have my chance in a couple of weeks when we have three birthdays in one week. 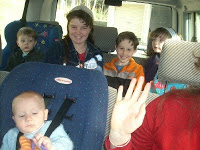 Saturday saw Stephen home and he took time out to take us on a Scenic tour. 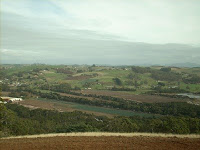 The colours in the Tasmanian countryside are very distinct, the fields were like a patchwork of colours, particularly being autumn I was fascinated to see the vivid reds and yellows. apparently it is similar to an English countryside, it reminded me a lot of the New England Tablelands. 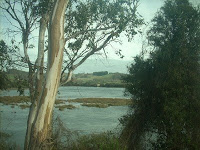 Very cold out that day. I didn’t manage to take photos of the beach but I’ll be honest and admit the surf was pretty much non-existent. I am spoilt with our beaches.

A beautiful photo of Gae and Corbyn.

Jem had adoring fans all week long. The children were often begging to take him to play, he took it all as his due. 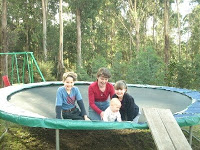 A lot of the time he was taken for a little ‘bounce’ on the trampoline with his constant ‘court’. 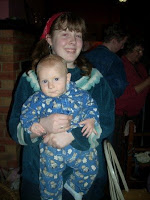 Autumn another adoring fan and the oldest daughter of the house with Jem. 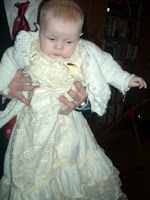 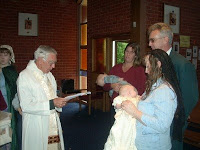 A Child of God. 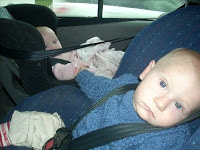 The time came to leave; Jem looks rather sad. 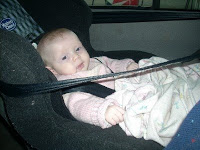 Another shot of Arwen. 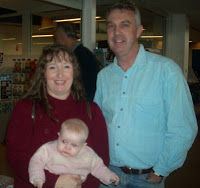 Stephen,Gae and Arwen at the airport. 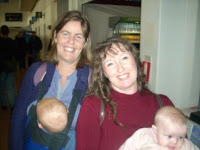 Gae and I, as we are about to board the plane for home.

A long trip home, with two plane flights and two car trips. The highway was still cut due to the flood so the trip home took a detour, but it was so wonderful to walk in the door and see my children. I had missed them immensely.