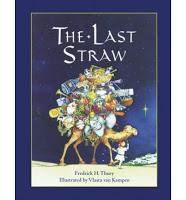 Are you clicking away on your library reservation sites yet, searching for Christmas titles? Here are a few more ideas for you, be sure to check out our bumper list for more titles.

The Last Straw – Fredrick K Thury
Hoshmakaka, is a proud but old camel, he is chosen to perform a very special task, to carry the wise men’s gifts to the new baby king in Bethlehem.  On the way Hoshmakaka is given other gifts to take to the new king, the burden is nearly too great for the old camel.
Absolutely, hilarious and a firm family favourite. 5 Star 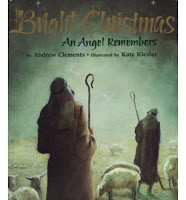 Bright Christmas: An Angel Remembers – Andrew Clements
An angel reminisces, about the ‘lead up’ to “a certain night” and about the night of the Christ Child’s birth. The text is written in rather a lyrical tone, the pictures are soft, though dark colours.  The focus on the Nativity from an angel’s viewpoint is a clever idea, but…the writing just uninspires me. 3.5 Star

The First Christmas – Rachel Billington
An accurate retelling of the Christmas story from the Annunciation to the Nativity with small embellishments.  Illustrations are warm and inviting, text very long. 4.5 Star 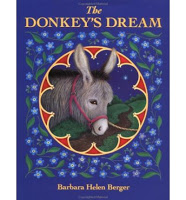 The Donkey’s Dream – Barbara Helen Berger
An donkey carries on his back a miracle, he carries the Virgin Mary to Bethlehem. Along the way he dreams he is carrying a city, a shio, a fountain and a rose.  He dreamed he was carrying a lady full of heaven, which he was.  So much symbolism, gorgeous illustrations. This book perfectly conveys the beauty, majesty and mystery of the Christ Child’s birth.  5 Star!! 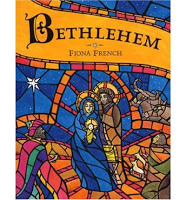 Bethlehem – Fiona French
The story of the first Christmas with text from the King James Bible.  Begins on the road to Bethlehem through to the flight to Egypt.  Illustrations are inspired by beautiful stain glass windows. 4 Star


The Dove and and the Messiah – Dorothy Van Woerkom
Based on a legend told at Christmastime in Mexico of how the dove became a symbol for the Holy Spirit. All the animals go to worship the newborn child but the dove, she is shy and no-one thought to tell her, too late does she learn about His birth, she flys back and forth weeping in grief. She decides to follow Him, she sees the Holy Family on their flight to Egypt and detours the soldiers.  Many years later she finally sees Him again in the River Jordan. Black and white illustrations. 4 Star 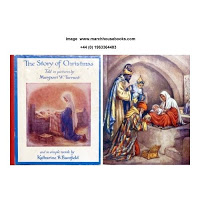 The Story of Christmas – Katharine Bamfield & Margaret Tarrant
The Biblical story, the Annunciation, The Nativity, the Flight to Egypt and the return to Nazareth.  Maintains the Bible rhythm with a slight simplification of language in parts, text is long.  Absolutely beautiful illustrations by Margaret Tarrant. 4 Star 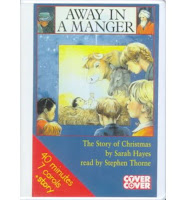 Away in a Manger – Sarah Hayes
The story of the Nativity told from different viewpoints, the animals in the stable, an angel, the shepherds, the three wise men, interspersed are the words to six traditional carols. Text very long, illustrations clear. 3.5 Star 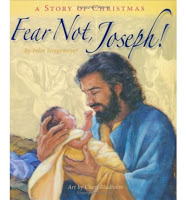 Beautifully illustrated how obedient St Joseph was to the will of God and how many times an angel appeared and told him to, ‘Fear Not’, from the Annunciation to the Flight into Egypt.  The illustrations are absolutely gorgeous. However I skim several parts when reading to my children, some make me ‘itchy’ some simply irritate me. Caveats- when Mary tells Joseph she is to bear a child (they are not yet married) Joseph’s doubts and thoughts are spelt out quite clearly, I heavily censor those two pages, not necessary for children to focus on, and the  Birth, Mary gives birth in pain, she was sinless therefore would not have been in pain!! (Catholic worldview) and the presence of woman attending the Birth (no mention of this in any of the Gospels).  What to rate?? without the caveats this would be a 5 Star and with censoring still can be, but with those only a 3 Star.