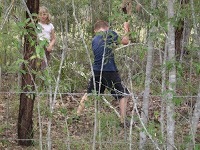 I have briefly shared that we are trialling a little of project based learning. We have most intrigued by the areas of interest the children have each chosen, they are rather varied and some choices have surprised us.

Princess’ choice however wasn’t a surprise in that she expressed an interest to learn more about Native Americans, in particular the Plains People. This was an area of interest she had last year and it had got pushed aside. Hopefully we can encourage her this year.
Princess was rather keen to make a teepee. A small scale teepee was suggested but when she saw a picture of a large one she wanted a full sized teepee. Michelangelo went with her to help cut some saplings. 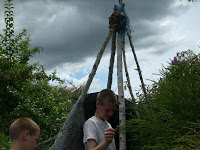 Carpenter was roped into service to help tie the frame together. 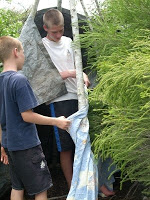 After a raid on dad’s shed and the linen press the teepee was declared complete.
This particular project ended up involving her big brothers but that has merit in itself. 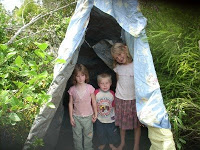 What more could any little girl ask for but her own teepee.