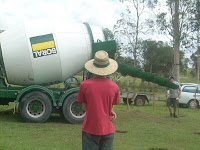 * We’re sad to report we continued to lose photos:( Memory Disc has now been consigned to the bin.

Tuesday morning was high excitement, it was the day of the footing pour. The cement truck arrived at 10:00am, it was happening! 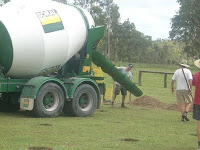 Thank goodness for the help of a couple of mates, Ug and Murray. They worked non-stop and we are very grateful for their help. Our two eldest, Koala and Carpenter worked continuously alongside. 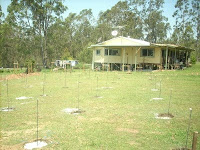 PC and Carpenter had spent the weekend cutting and labeling the rods meticulously. There was a bit of a rush at one stage as the cement started hardening and the rods were not yet in. Disaster was adverted and rods are in.

Two hours later the job was completed, I’m pleased I talked PC out of his original plan of mixing cement himself. 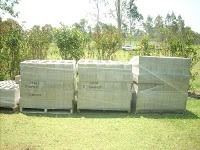 Thursday the pier blocks were delivered.
We also finalised the order with the truss company and I wrote a cheque for thousands, the largest cheque I have ever written! 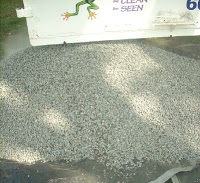 Friday the sand and aggregate were delivered, all systems in place to start laying the piers on the weekend. 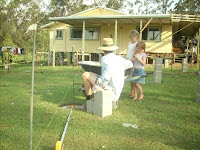 Saturday PC was up at 5am to work in the cool of the morning laying pier blocks. He worked steadily until 11am when it became so hot he nearly fainted. He started again at 4pm, the heat was incredible. A violent storm that night broke the humidity. 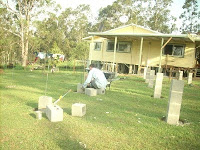 Fortunately Sunday was cooler but he kept to the same timetable. We had a late Mass at 11am so it enabled him to take advantage of the morning cool. 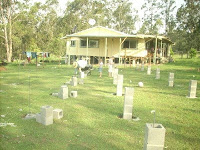 This week he has been coming home after work and laying more pier blocks. He is estimating he will be finished by the end of this weekend.

We are really pleased with the pace, it is all happening much faster than I was expecting.