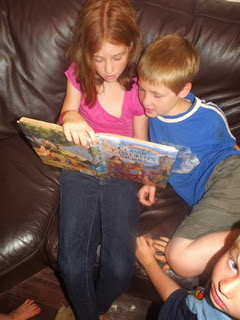 Into a rhythm now with our ‘Leap into Literature‘ focus, not to say we’re achieving everything planned every  day, but that is par for the course at the end of the school year.  It’s hot, we’re winding down and expecting a baby in less than a month, so all things considered I’m happy with what we’re achieving.

Most exciting Jelly Bean’s reading has picked up a few paces.  Having an older child still working on reading skills is not ideal, you feel like a hamster on a wheel, stuck there for years and years, any little progress is hugely celebrated.  Added to the mix is Jack Jack who is a couple of steps behind and you can imagine my dream is for both to be reading independently by February next year so I can concentrate on teaching Jem to read. Progress this fortnight is our discovery of Kate DiCamillo’s Mercy Watson books, humorous, engaging and the perfect bridge between early readers and chapter books. JB is managing to read half a book a day and JJ a chapter a day!!

Truthfully a couple of the children would only do the subjects they enjoy and avoid those they don’t if they could, so this requires constant vigilance and had to be addressed again this week.  The older three continued to work independently and Einstein is quite diligent with his History of the Church studies and has continued researching electromagnetic fields, Michelangelo concentrated on maths and Princess loves our literary approach to studies this term, devouring books each week.   Whilst the older children continued to write, I concentrated on oral narrations with Jelly Bean and Jack Jack, discovering a need for improvement there.

This past fortnight we’ve taken a Step Back in Time, and read piles of history books from our home library and from our town library. We’ve roamed over quite a time period from ancient Sicily to the Afghanistan War.  We’ve discussed the Shogun period of Japan and the Samurai Warriors, the discovery of the Americas by the Spanish from the natives viewpoint, Lewis and Clark’s exploration and the American westward expansion, the rebuilding of London bridge several times, imperial Austria and Haydn, Picasso and art history, the introduction of Levi jeans and Coco Chanel’s impact on the fashions, World War 2, Nazism, the Jewish persecution, Japanese internment camps and racism, the war in Afghanistan, the Taliban and secret schools.   Lots of new topics and plenty of discussion.

*For the benefit of my local friends I have an asterix next to our local library books, all other titles are from our home library.