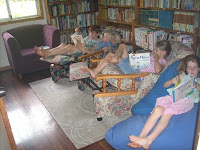 Educational experts are enthusiastic in promoting exposure to literature, and exposure from a young age, as the key to reading success. Language, thinking and literacy development are fostered by regular reading.

Enjoying and sharing books has been played a huge role in our family culture over the years, however at times it has ebbed rather than flowed.  I was recently discussing these tides with a friend and reflecting on how this may have affected the ages our children began reading. My friend had noted a similar pattern in her own home. 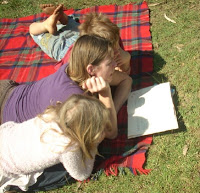 When our older children were young we enjoyed a huge amount of literature together.  We read many picture books daily and once our oldest turned four we would often read 2-3 chapter books consecutively.  Hours upon hours were devoted to literature, a rich and rewarding lifestyle.  However as the years rolled on, we introduced screen time, our family size increased, the children grew older, we juggled meeting the needs of a wide age spread there have been times when literature has been pushed to the side.  Sad to say long periods where read alouds were minimal.  Whilst our oldest have had a rich exposure to literature, our middle set and in turn our younger ones have not had this same richness. As I reflect on the ages our children began to read and the literacy tide in our family I perceive a connected pattern. 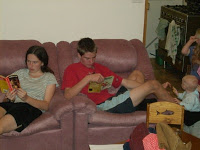 Michelangelo was much later at reading, like his brothers he learnt his sounds before seven but  took a long time to move forward, he was ten before he was reading regularly for pleasure. The girls picked up sounds effortlessly like their older sister; though a few months later than she did, however like Michelangelo they took longer to catch the ‘reading bug.’  Actually  Princess could read independently earlier than her brothers, at seven but wasn’t interested in reading for pleasure until late eight. Jelly Bean at seven reads at a functional level but her interest isn’t always high. These were the years of our literacy ebbs and flows. 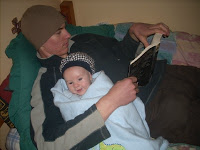 Reflections: Has the fact that the middle three been exposed to far less literacy had an impact on their interest in reading?  I suspect so.
Has the fact that I have had less energy to ‘encourage’ them in reading more consistently produced later readers?  I often wonder.

However all thus far have learnt to read well and by eleven it would be difficult to discern any differences despite the various ages they became readers.  Certainly they are all avid readers once they discover the pleasure reading brings.