We were recently fortunate to experience a Medieval Day, which was hosted by our homeschooling group and presented by our local guild. The day was sensational! I truly think it may have been one of the best days our homeschool group has had yet. 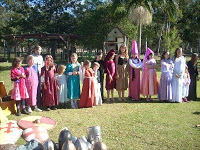 Many of the children (and parents) dressed in period costume. We started the day with a parade of costumes. 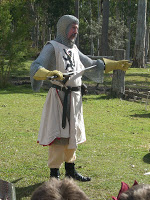 The presenter from the guild was truly excellent, very skilled and very passionate about his topic. He was dressed in period costume and then suited up into knight’s armour, explaining as he went. 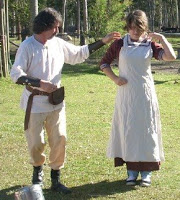 It was a very interactive presentation which went a long way to keeping the children’s interest. He asked for one of the girls to volunteer, and she dressed in a female peasant’s costume.

Carpenter’s friends nominated him as the male model. Here he is preparing to impress a girl in the next village.

Interestingly, did you know that the Vikings didn’t wear horned helmets as often depicted?. 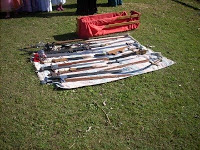 An array of swords were displayed, and some of the children were chosen to hold them.

There was great vying to be given the opportunity. 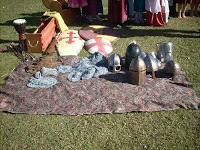 Others were given the chance to wear the helmets. 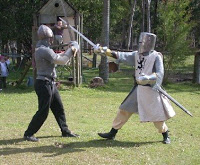 We watched Colin fencing with Josh, a member of the guild and homeschool grad.

Then some of the children were given foam swords and shields and had a mock battle. Einstein fights a friend here.

After the two hour demonstration we shared in a Medieval Feast and then we ran workshops.

Shield making was one of which Michelangelo was very keen. 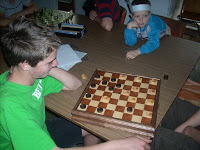 outdoor medieval games and indoor games such as chess and checkers. 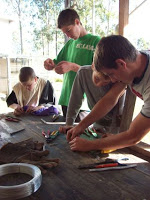 Most popular with the older children were the embroidery and chain mail sessions.
The chain mail was a big hit with our children!! Thanks Josh:)

Special thanks to our hostess and to our organisers Deanne and Rebecca. It truly was a terrific day.