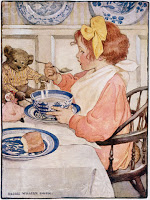 Our 30 Day Elimination period came to an end a fortnight ago, teen with moderate acne’s inflammation was greatly reduced and skin was looking great, the best it has looked in two years.  As an added bonus we were all experiencing improved health.

We decided to re-introduce potatoes first and this appeared to be successful, although we continue to limit the amount of potatoes in our diet.  Next trial; our teens were longing mostly for a hot cereal breakfast, after much thought teen at the most risk trialled with rice flakes and goat’s milk.  The gusto and enthusiasm was a joy to behold.  A few days later we also trialled rice, but already by then we could see the truth, teen’s acne had a massive inflammation reaction and outbreak.  Other teens had trialled rolled oats, one with goat’s the other with cow’s milk.  Both also broke out, but not to the same degree.  Compounding the outbreak was a trip away this past weekend, travelling on the road and Birthday Parties make it very hard to adhere to a diet.  The truth is now very, very clear that all grains will have to continue to be eliminated from our diet, teen’s skin now has much ground to recover.  Manuka Honey is coming to the fore again though:)

Christmas could also bring healing to a halt, although we have eliminated most grains from our feasting, we will be eating dairy and sugars.  So, much sooner than intended and not really within an ideal time lapse we will be trialling these food groups too.

The past couple of weeks I have been absorbed in reading The Gluten Connection and Gluten Free Girl riveting; I’m certain I am boring my friends with my enthusiasm. I’ve also been absorbing other knowledge; does rolled oats contain gluten? well no but… it can be contaminated by being grown in the same fields and processed in the same plants as wheat also Oat’s amino acid sequence is extremely similar, but not entirely the same, as gluten’s amino acid sequence. Is Canola Oil really a good oil?  Paleo say yes, but….. Primal say no.  So we’ve been trying decide which alternative to use for cooking and have decided on lard. I also discovered that Canola Oil is an inflammatory oil, the last factor we need.

Food has emotional connections and adjustments have to be made as it is now apparent that this is a long term lifestyle, .  One factor that has emerged is that more variety is needed in our menu, also that as much as possible the whole family needs to adopt this lifestyle as the ‘Paleo Support Group’.  This week after much deliberation I purchased; The Paleo Diet Cookbook,  The Primal Blueprint Cookbook and The Gluten Free, Almond Flour Cookbook.
I’m really looking forward to their arrival.

I’ve been fascinated to discover a whole new world; the world of grain free, dairy free, sugar free cooking.  Many bloggers have generously shared their knowledge and recipes. Mark’s Daily Apple (primal cooking) Joyful Abode, Kat’s Food Blog, Thinking Outside the Box and of course Elana’s Pantry.   Many Gluten free bloggers have suitable recipes too, Alisa Cooks and Dish Towel Diaries are new discoveries. If you know of others please let me know.