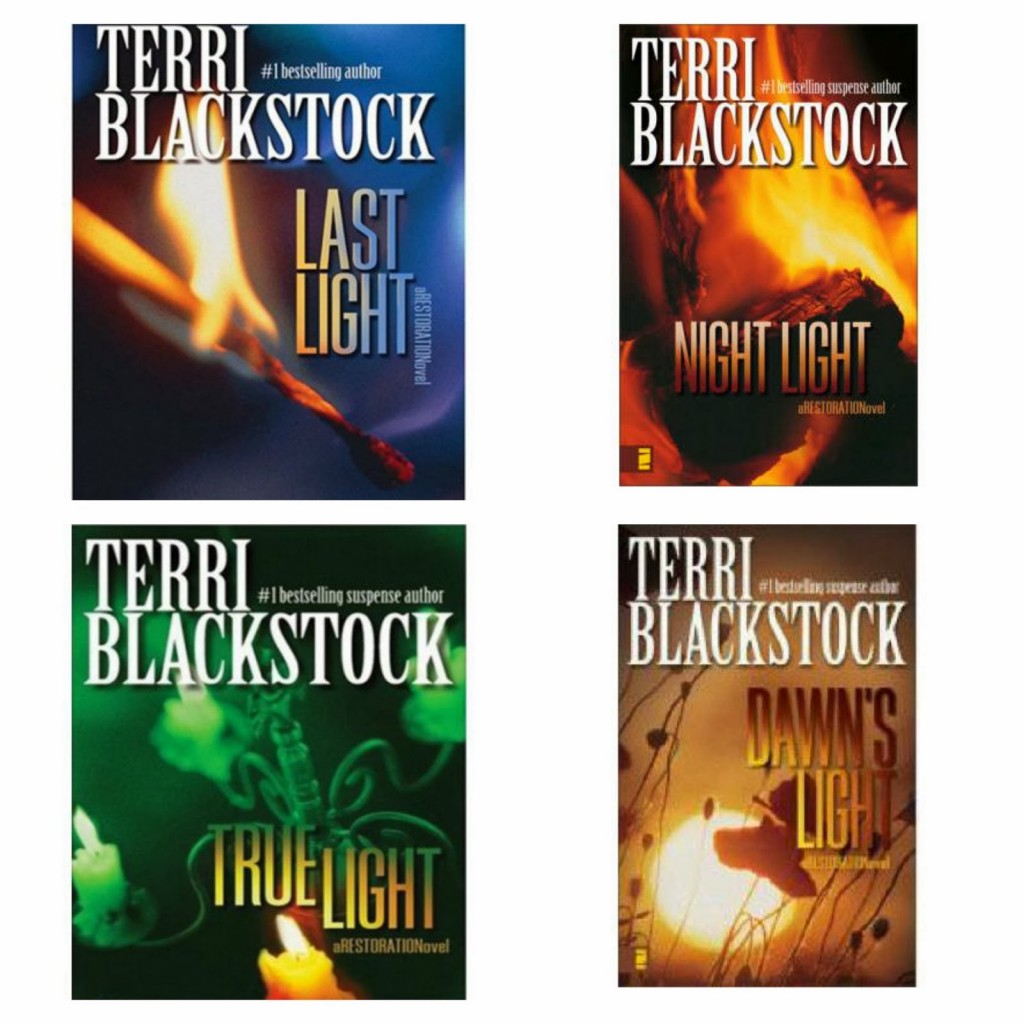 Occasionally I find a Christian author whose writing style appeals and I settle in to enjoy some Christian fiction, generally romance or suspense.

Terri Blackstock’s Restoration Novels are Christian suspense and very engaging.  Imagine if tomorrow a supernova sends out pulses that interrupts any and all electromagnetic energy here on earth.  There would be chaos, nothing would work that we rely on today in our technological world.

Blackstock’s story plot instantly grabbed me as our 16 year old is totally fascinated by all things electromagnetic, this is the field he plans on studying at University and he has endeavoured to explain electromagnetism to me a time or two, I’m still working on understanding;)

The Restoration novels focus on the trials and triumphs of a Christian family, the Brannings and their neighbours and friends. The Brannings are a wealthy American family of six, Mum, Dad and daughters, 22 and 12 and sons 16 and 9.

The three novels are written predominately from the perspective of the oldest daughter, 22 year old Dani. My initial and mostly continual reaction to Dani was I wanted to slap her, a pretty violent reaction from me but she would have to be the most selfish, self-centered character I have ‘met’ in a long time, probably up there with Scarlett O’Hara.  Really I nearly put the book down as I also found the other children self-centered and the family was like a collection of individuals and not a family unit, however I persevered and was soon engrossed.

As the crisis continued the various family members eventually began to change, found strengths within themselves, became more charitable and giving Christians and became far better people.  Eventually I even grew to like Dani, though I always liked her friend Mark, a exemplary guy and her mother who was a giving woman.

As a Catholic I did find a few theology differences, though I’m used to that when reading Christian fiction.  The last novel really grated as the difference was quite distinct.  The family faced a terrible situation, one every parent prays they never have to face, their youngest daughter, Beth was terribly attacked and in critical condition. But the author’s ‘take’ is not mine at all.

So here’s my theology ‘take’. There are three ‘powers’; natural, supernatural and preternatural and though God has set up the natural laws He doesn’t often intervene, He can and does, but some bad things just are, take earthquakes etc. Now looking at when other sorts of terrible events occur, sometimes they are simply accidents but sometimes terrible events are the result of evil actions, people choosing to do the wrong thing, a legacy of free will which He gave us. So when Beth was attacked I see this a result of free will exercised with evil intent.  I don’t see this as God needing to ‘teach’ a Christian more, for them needing to learn more and this is Him breaking them down to ‘get it’! I see it simply for what it is, wrong intent on behalf of the attacker.  Not to say that we can’t grow closer to God in situations like this or take something from it.  But He allows it not causes it, big difference.