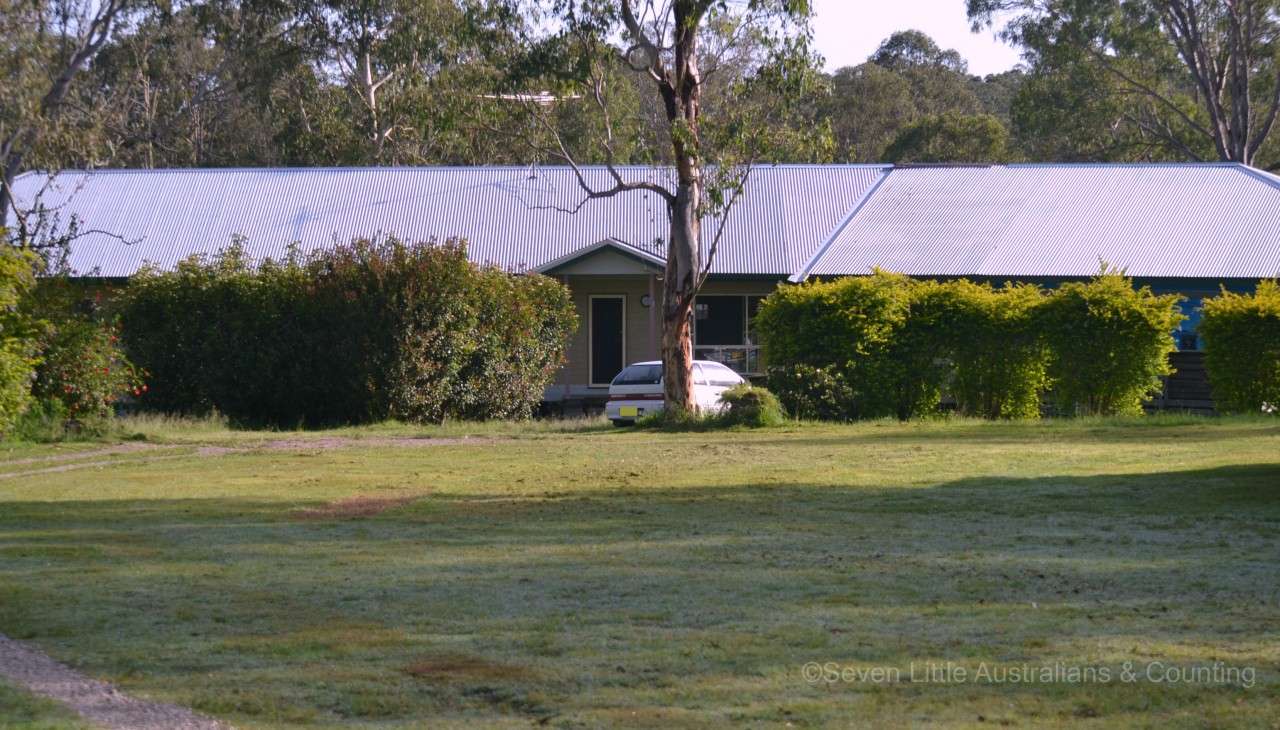 Finally after two long, challenging weeks our roofing is complete! Through days of alternating 40C/104F temperatures and rains we persevered and made it through. Our old house/new house is no longer, it is all one house externally.
I’ve already shared the ‘chronicles’ and now for the conclusion.

Beams In Place
Demolishing The Front Of The House
Walls Go Up, Roof Comes Down
Trusses Are On!
First Stretch of Iron On!

Monday thru to the following Thursday

In other words a further week and a half 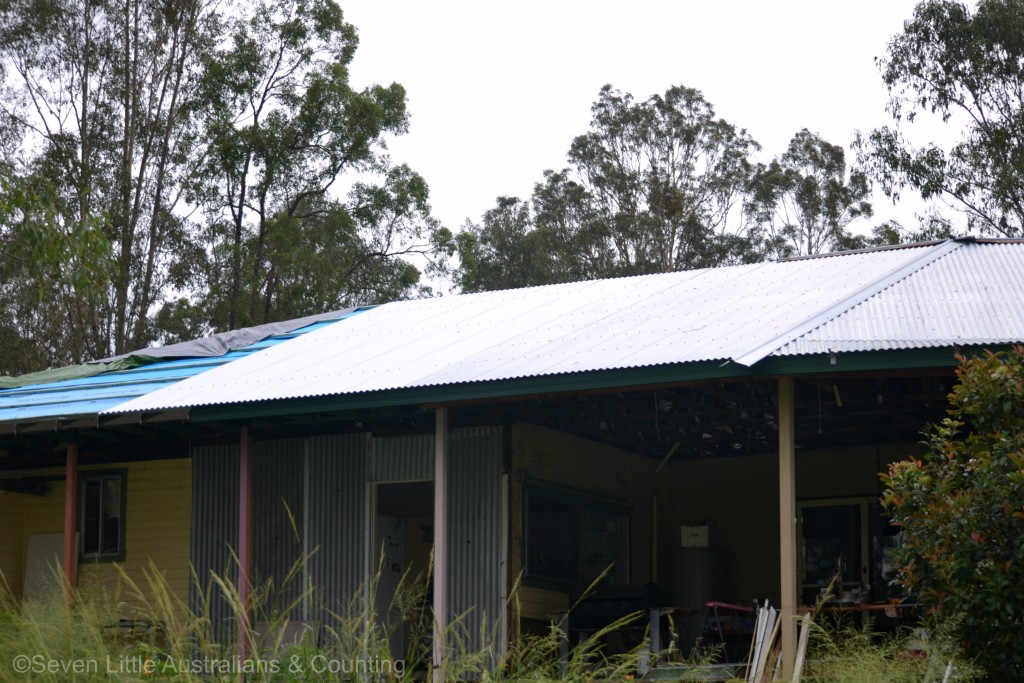 After installing the ‘straight stretch’ of iron sheets on the front of the house on the Sunday, PC then had to return to work. He now had only a couple of hours each afternoon after work to complete the job.

Monday afternoon he finished installing the sarking over the back section of the house. Then we handed up the sheets to him and the race was on to complete before the storm broke. He finished screwing down the last sheet just as the thunder began. 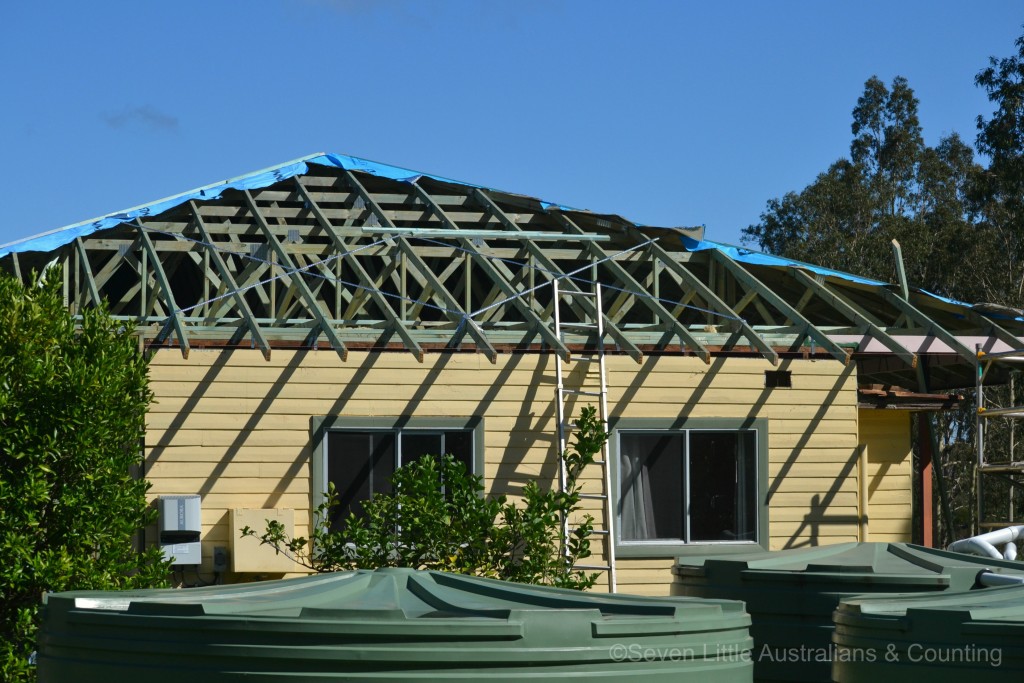 Storms were to be the afternoon pattern that week and it was of great concern as the end of the house wasn’t even sarked, though it was covered by tarps. Tuesday afternoon saw a wild storm with winds, where we prayed mightily, the storm swept around and we were blessed that we didn’t lose the roof. 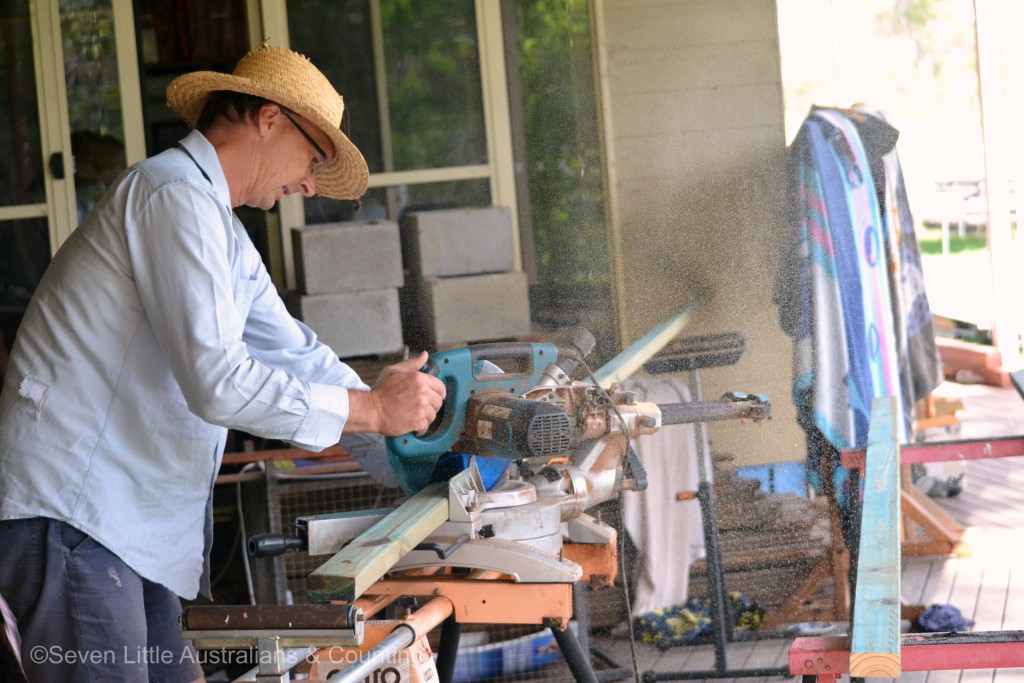 Wednesday through till Sunday the focus was on completing the sarking, in between the storms.

To add to the pressure on Wednesday Michelangelo(16) headed to Adelaide for the Australian Catholic Youth Festival this meant all help now rested on the girls and I, this was a little daunting and certainly made it harder for PC.

It resulted in me having to conquer my fear of the drop saw and I took over the task of cutting the battens, rather proud of that achievement. When I was a pre-teen my father cut of his thumb with a bandsaw (they sewed it back on) and I’ve had a ‘healthy’ respect of power saws since, so major victory. 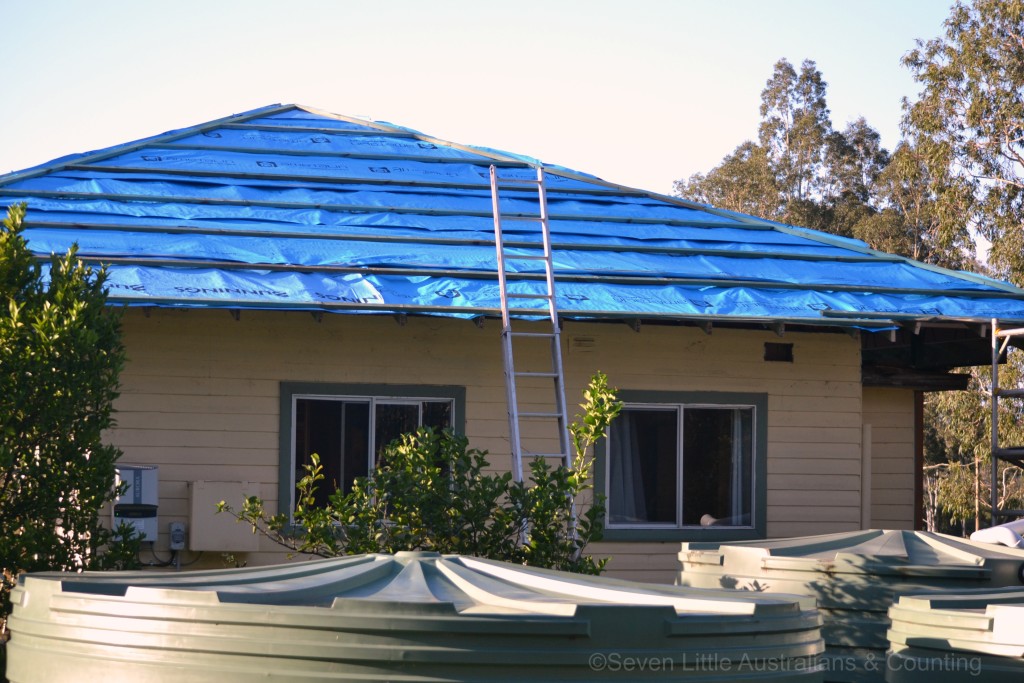 Once the sarking was completed, it was then time, Sunday morning to turn our attention to cutting the iron. We had intended on using a nibbler but a chance conversation led us to researching on cutting iron with a circular saw. This was the way we went and it was so much easier, though we put strict safety measures in place. 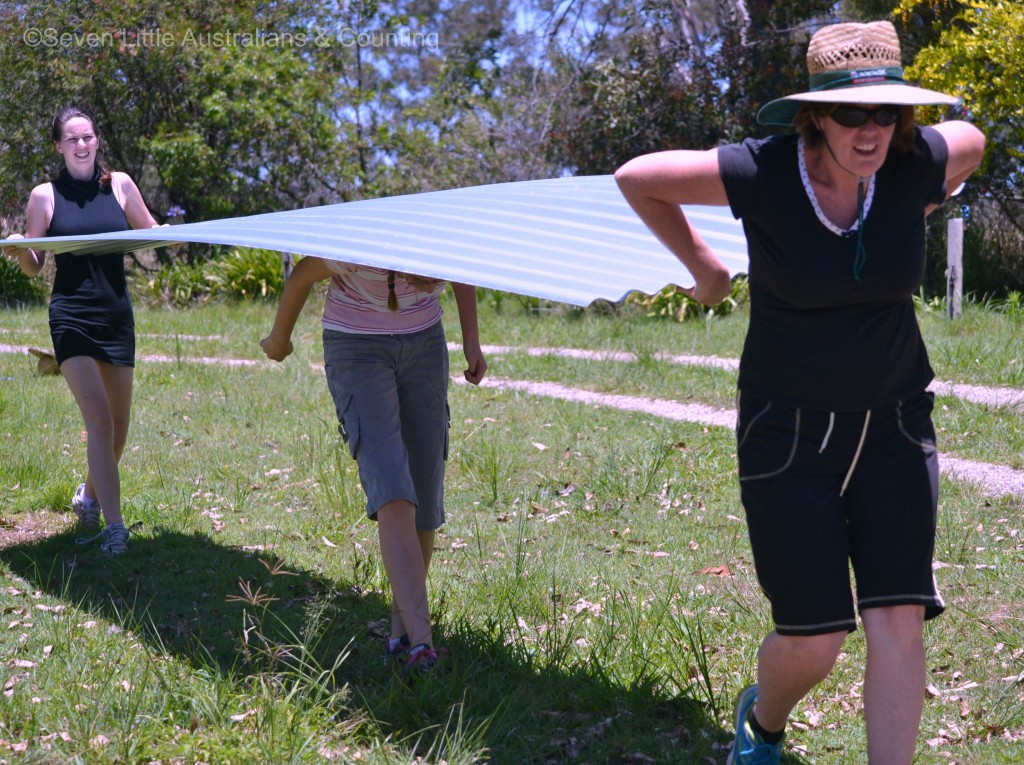 Whilst ‘us girls’ didn’t have the same strength as Michelangelo (he is exceptionally strong for a 16 year old) we solved our challenges with some ingenuity, albeit rather unconventionally. Princess (14) took all the weight, Anna Maria and I only needed to balance and direct. 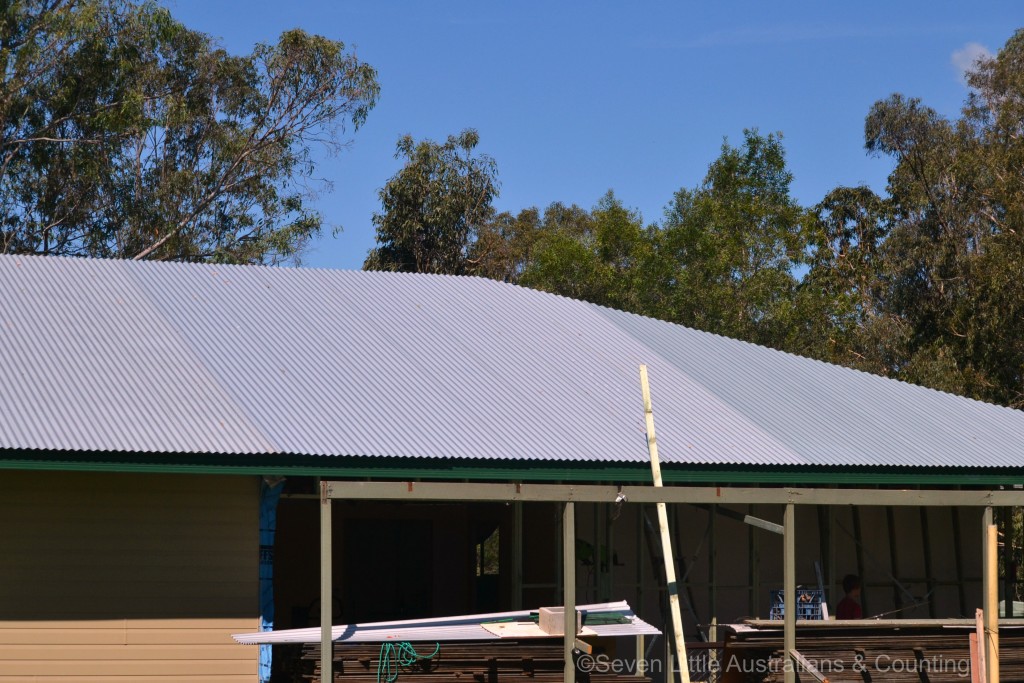 As PC measured and cut each piece of iron for the front roof, I was astounded to discover the ‘off cut’ was to be used on the end roof, fitting perfectly there. PC assured me it was all mathematical, I’m still uncertain of the formula behind, suffice it to say it did all fit just like a jigsaw. 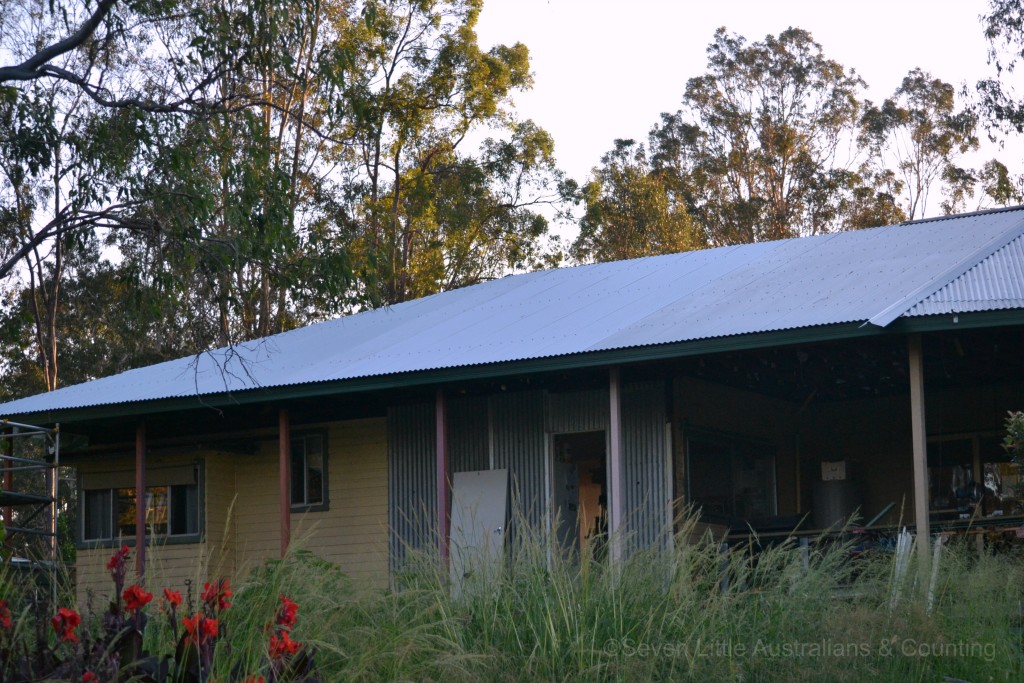 Once the front was completed we turned our attention to the back sloping sheets, once again each ‘cut off’ being put aside for the other half of the end roof.  Working out the back was a challenge considering the distance from the ground to the roof, but with the help of the tower (left foreground) we managed to complete the back roof. 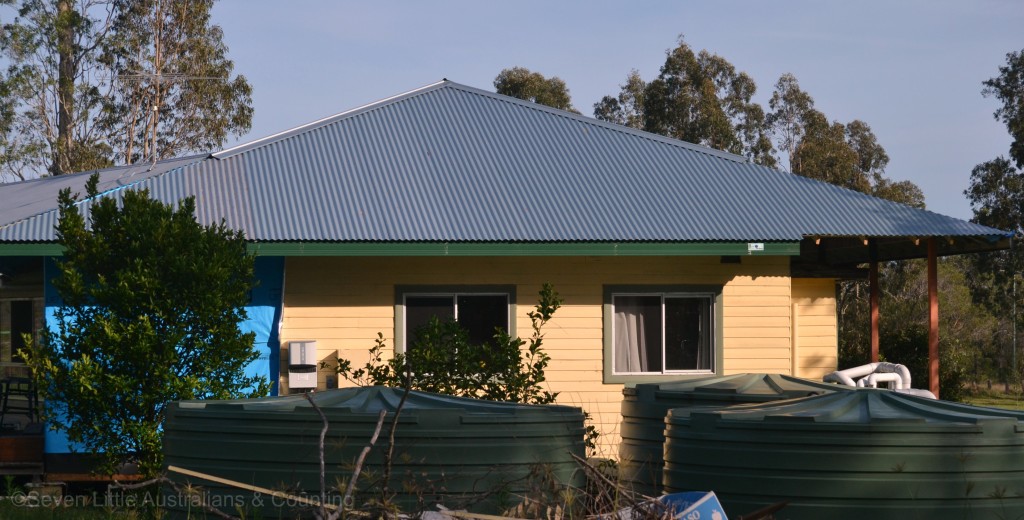 The end roof did indeed fit together smoothly and by dark we had completed all but a couple of pieces.

The next few afternoons were taken with finishing touches, finishing the ‘screw lines’, adding the ridge caps, still not quite finished.

But we can now rest easy as the summer storms hit us. 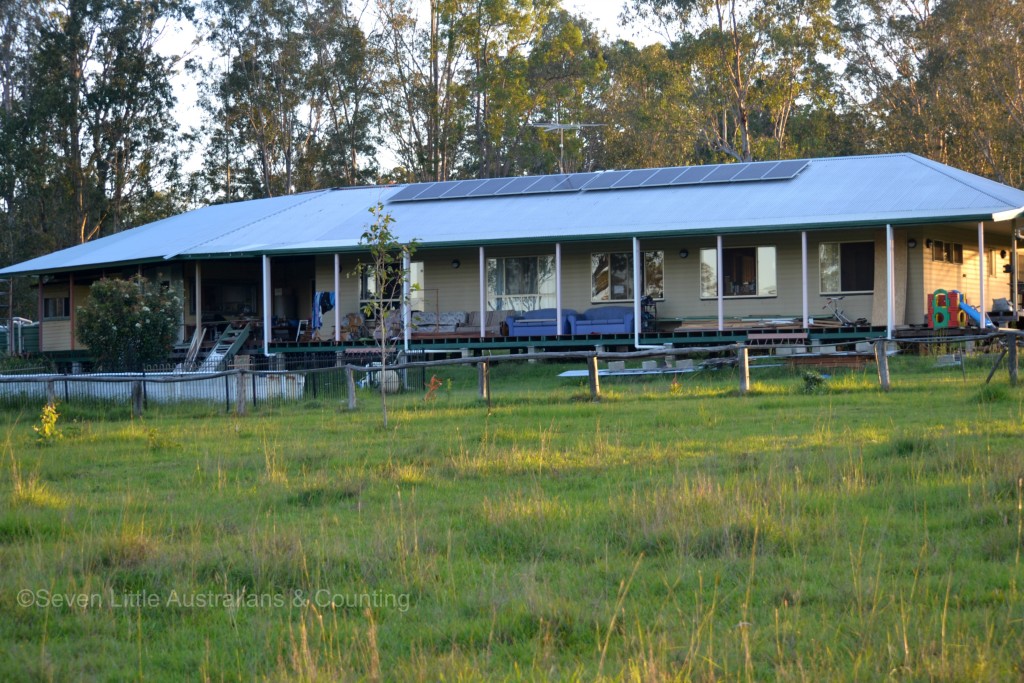 It is such a pleasure to walk up from the paddocks and see the one streamlined roof, 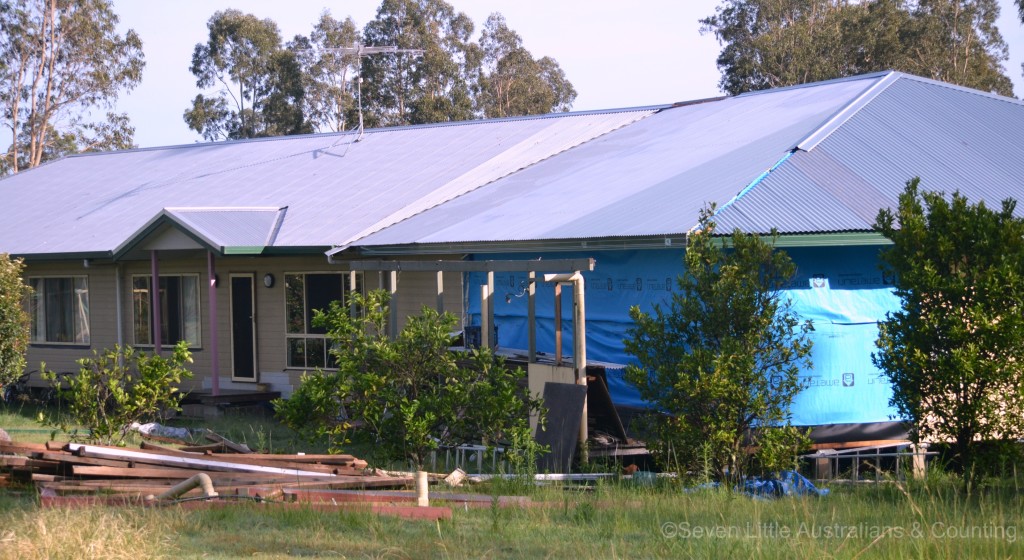 to stand at the edge of the front of the house and see an unbroken line of roof. 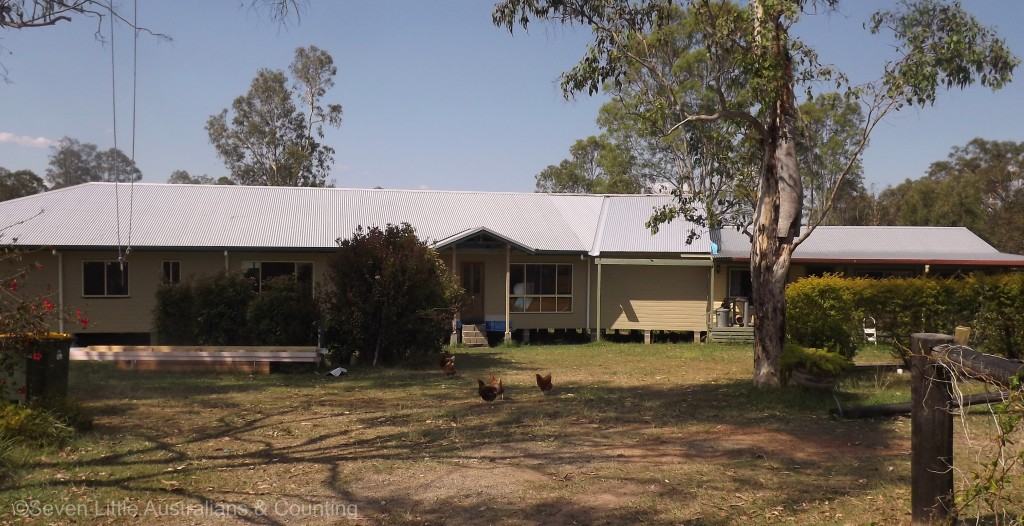 The old house/new house is no longer 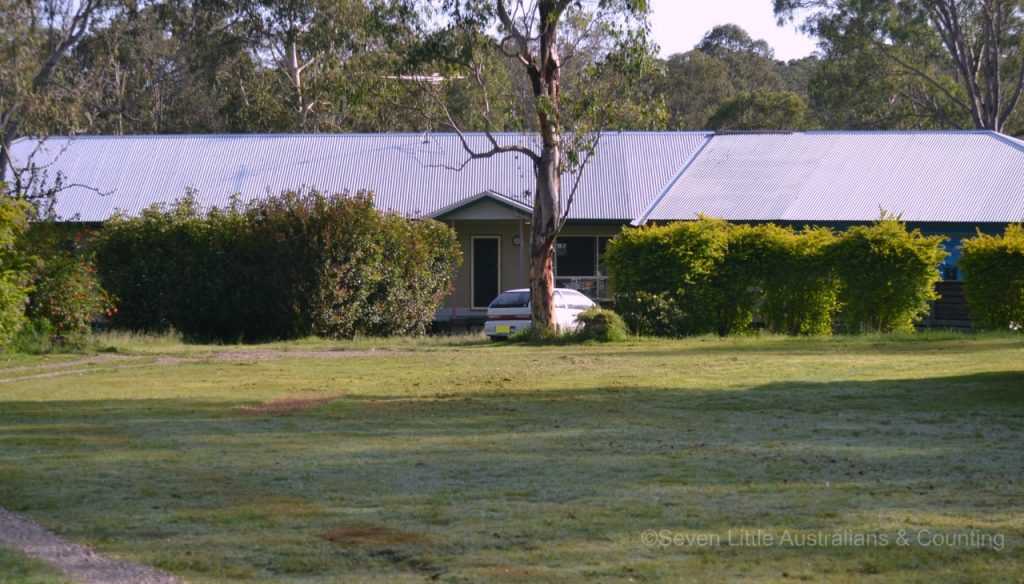 I realise anew just how long the house is. What a view, one house 🙂