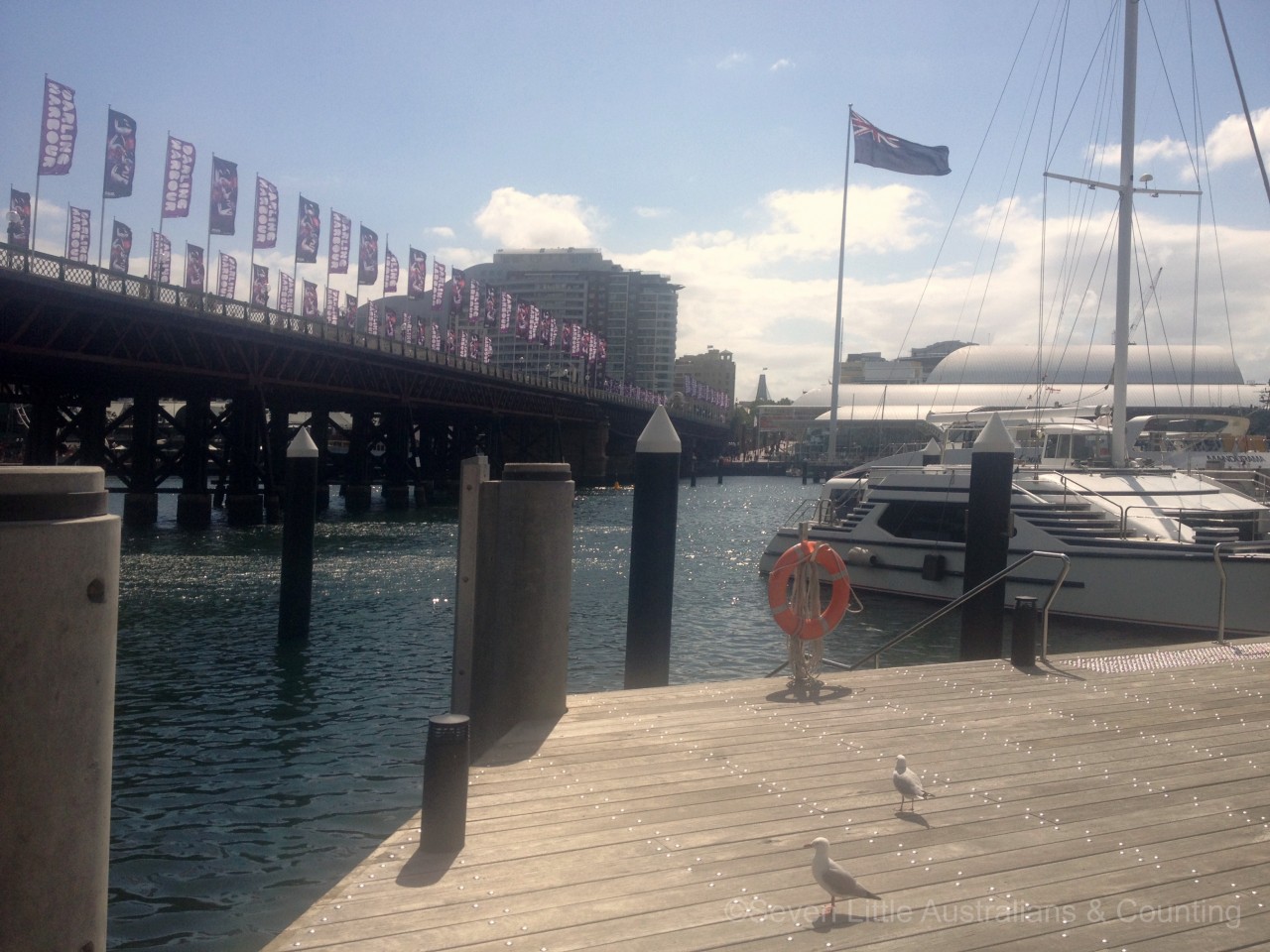 When we made the decision to spend Christmas in Sydney with our lads we decided it was also an opportunity to have a holiday. Though we are occasionally in Sydney to visit family we never have time to actually take advantage of what our State’s capital city has to offer.  This time would thought we’d ‘play tourist’ and explore and experience. 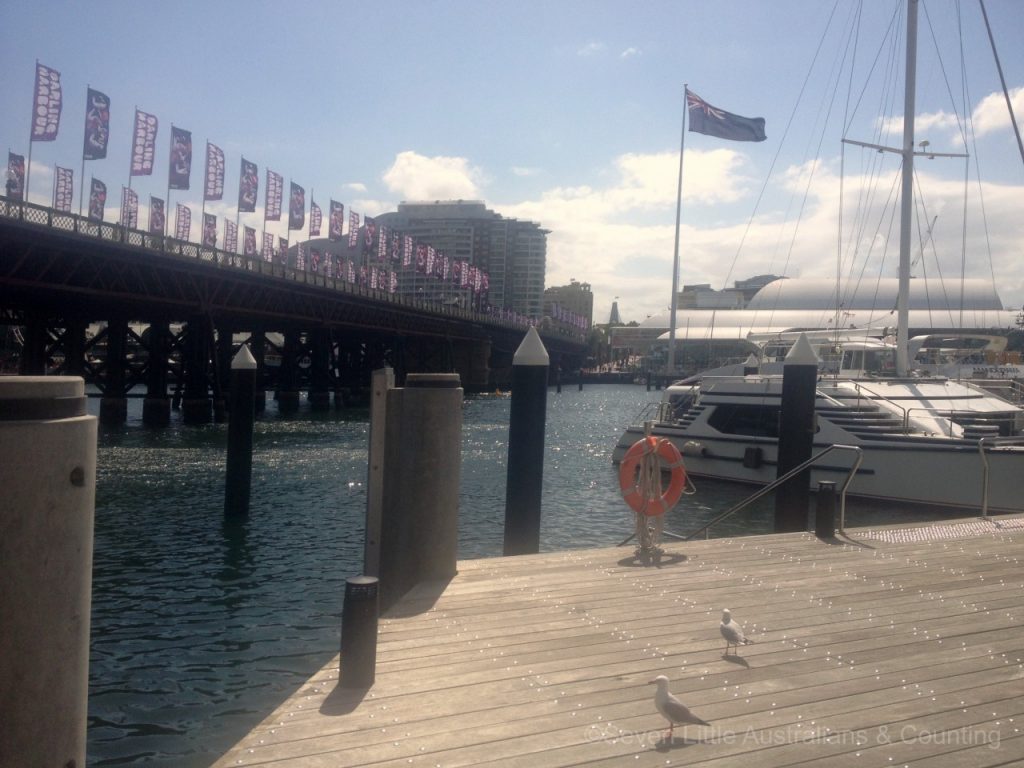 It’s been fourteen years since our last family holiday, in part some of this is due to the cost of accomodation for a large family. We were fortunate to be able to stay with out boys in their rented home, it is a small three bedroom home with a small lounge room and decent backyard.  Five young men share this home but as it was Christmas only our two lads and Rose’s brother (Carpenter’s girlfriend) were in residence.  Our intention was to pitch a tent in the backyard as we did when we attended Carpenter’s Graduation, on that occasion there were seven young men staying there besides us, however it was heavily raining when we arrived so we changed plans.

One bedroom was large enough to fit our three older girls and all our luggage, there was just enough room to squeeze Michelangelo(16) on the floor of one of his brother’s rooms, PC and I slept on the floor of the loungeroom with two of our children at our head, and a couple of little ones on the lounges. All floor space throughout the house each night was covered with self-inflating camping mats, throughout the day we’d store the mats on Einstein’s bed. During the day with the luggage in one room and the mats in another, everything flowed nicely. We were away for ten days, visiting extended family, preparing for and celebrating Christmas, it wasn’t until the last three days that we played tourist. In that time we packed lots and lots in!! 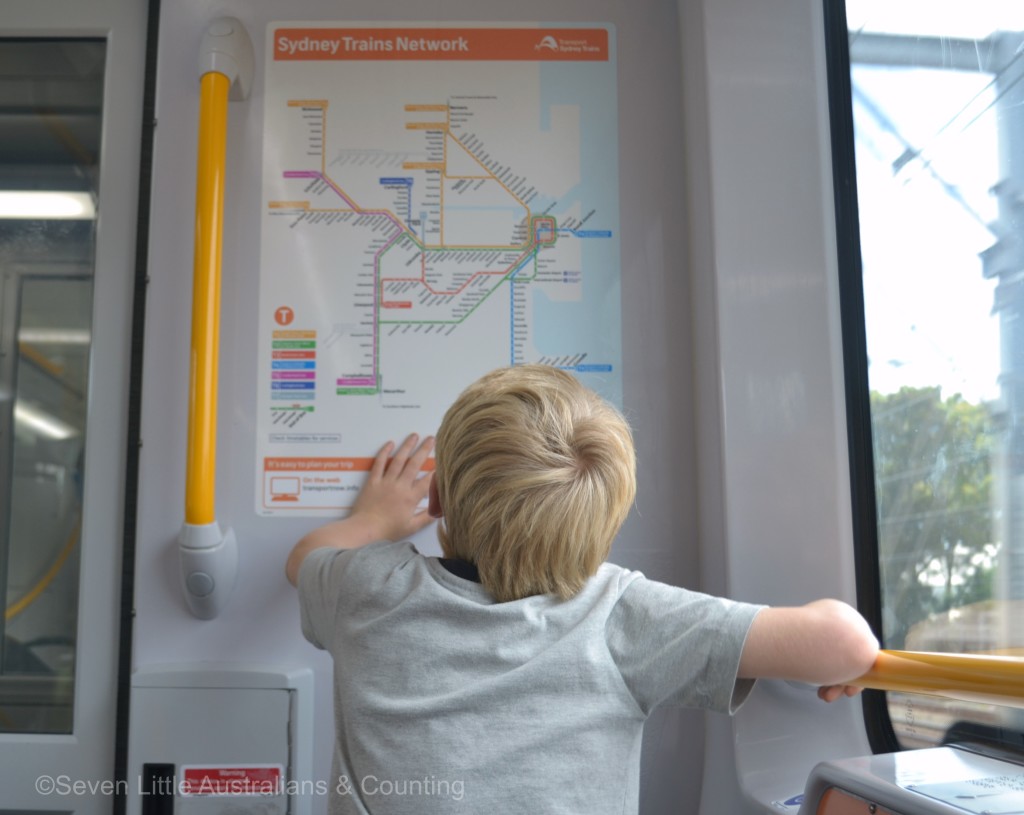 Top of our children’s dream list was to experience public transport. As children from the bush they had only experience travel by car, that is Princess (14) and down, our oldest four have had wider experiences.  We set out to make their wish come true. Public transport in Sydney was undergoing a transformation, paper tickets were being phased out and the new Opal Card (only option now since Jan 1) was being promoted. Researching the best option for a large family we were advised our most economical choice was the Opal Card which covers travel on city trains, light rail (tram), buses and ferries. As we planned on traveling on a variety of transportation, hopping on and off, Opal Cards with their capping at $15 a day for adults and $7.50 for children, and their 30% discount was the best deal for us. As a bonus public transport on Sundays is only $2.50 per person all day. The Card is similar to a pre-paid credit card and is tapped to enter the ‘turnstile’ and tapped again when you exit, it made it very quick and easy with no queues nor fumbling with cash as we jumped from train, bus, light rail(tram) and ferry.  We buddied younger children up with older siblings or parents, the ‘adult’ in each group was responsible for their cards and we were able to move through the ‘turnstiles’ rather quickly. 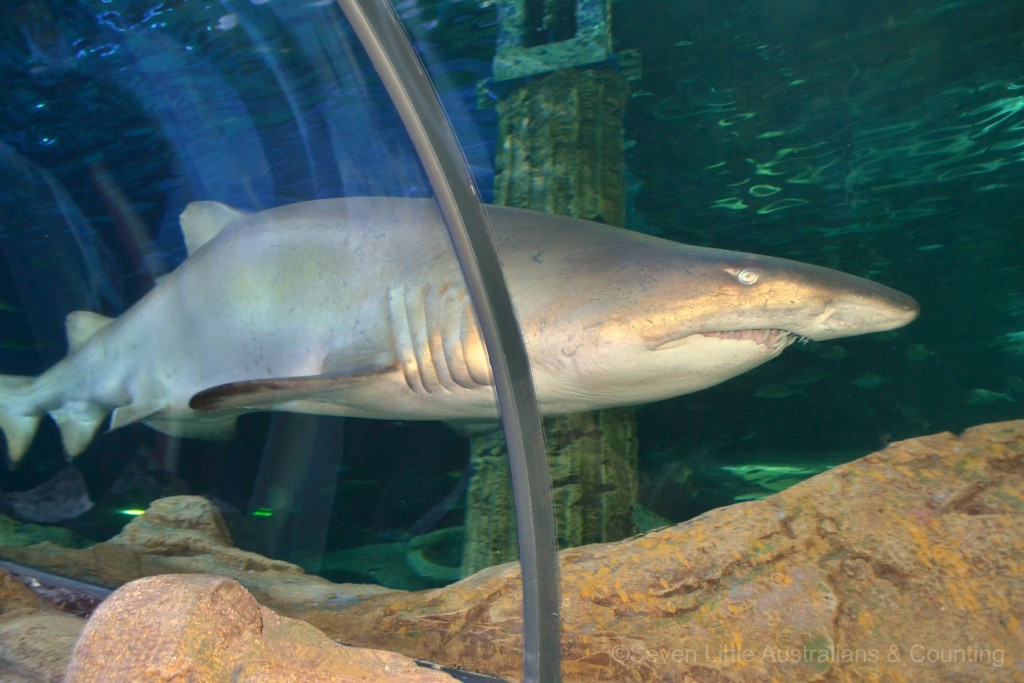 Sunday we set out, planning to train into the City (our boys live in Western Sydney) to Darling Harbour to visit the Sydney Aquarium and then the Powerhouse Museum.  On the train however, we discovered due to track work we would be changing at Parramatta to a bus detouring via Olympic Park and then back on the train. The children were excited as we hadn’t seen where we could fit bus travel into our three day timetable. This added time to our trip and as we’d set out late we didn’t arrive at Darling Harbour until 12pm. We truly forgot it was school holidays and were totally not expecting to wait on the line for tickets for an hour!!  Luckily we had water and a packed lunch so were able to eat whilst standing in line.  Prior to our holidays I’d researched thoroughly and discovered Kellogg cereals had a promotion, pay for child, adult free!! Obviously we’d purchased a few boxes and had vouchers, actually I had extra vouchers and to the pleasure of people in the line behind I gave them away. Aussies be sure to check out their promo as it’s valid until the end of June 2106 and covers many attractions around Australia. 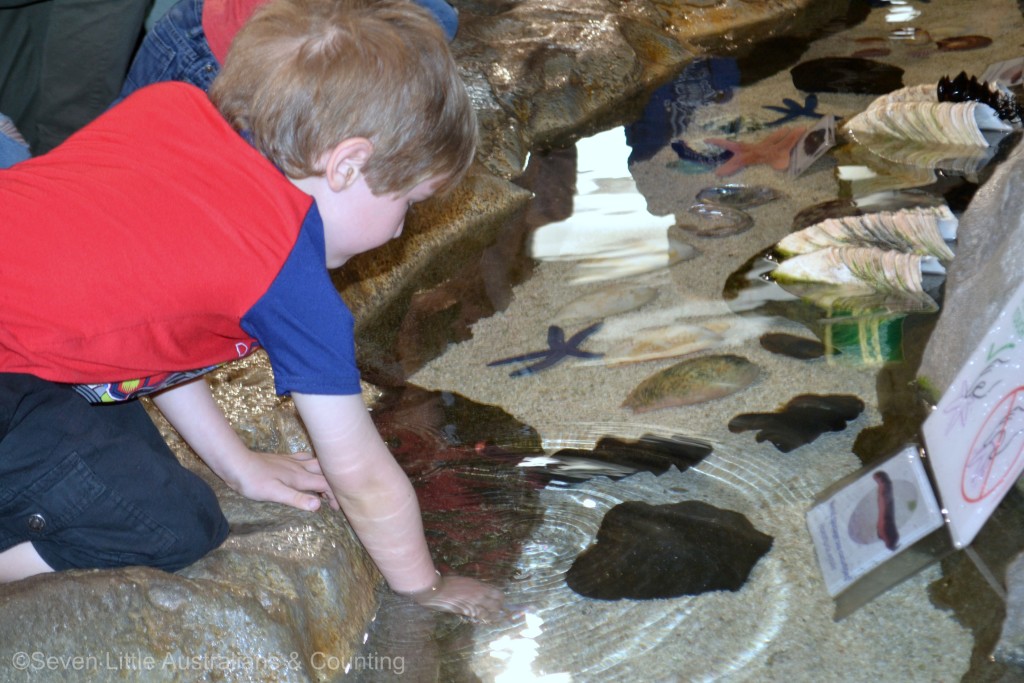 After a long hour we entered only to be immediately separated from our older children who had their ‘buddies’ with them, by the crowd, it was most distracting not being able to have all our children in view. We were so jam packed that we were moved along with the crowds and were not able to linger and enjoy the experience. There were odd moments that we enjoyed, the younger children enjoyed the hands on pool, and we all particularly enjoyed walking underneath the sharks, though frustratingly we were forced to move along quickly with the press. Overall it was a lot of expense and most disappointing, I would recommend that you never go in school holidays. 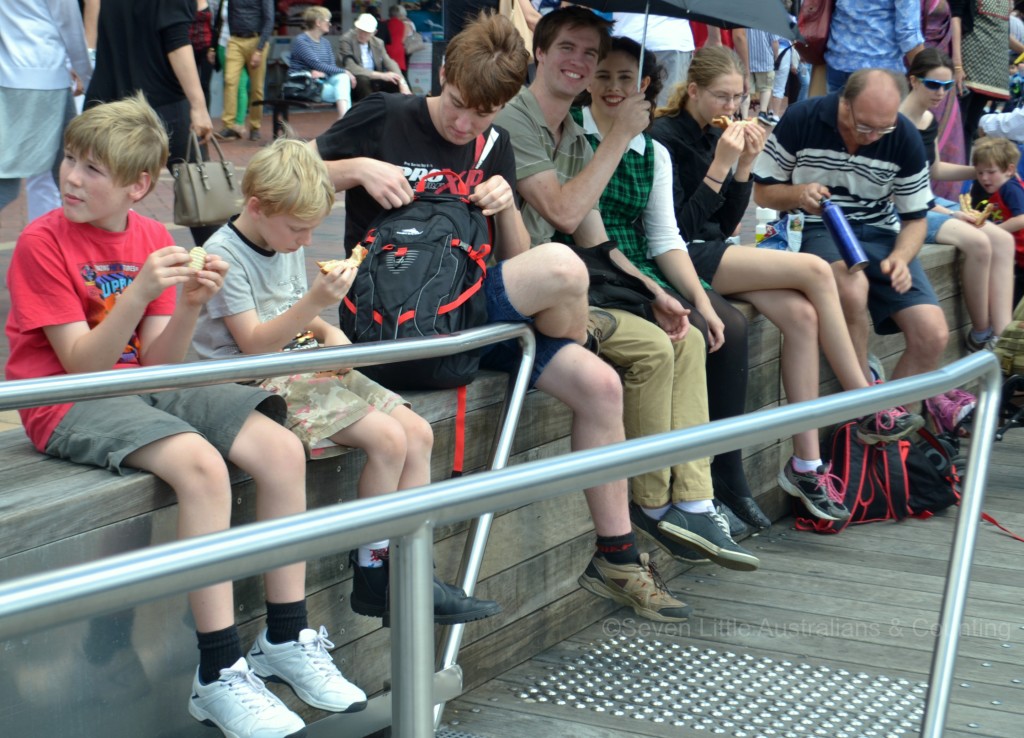 Carpenter and Rose had come in on a later train time and were awaiting us outside. We enjoyed the rest of our lunch together overlooking the Harbour and were entertained by the street performers. We walked on to the Powerhouse Museum but when we arrived at 4pm they staff advised us it would take at least two hours to explore so we decided to return the following day. 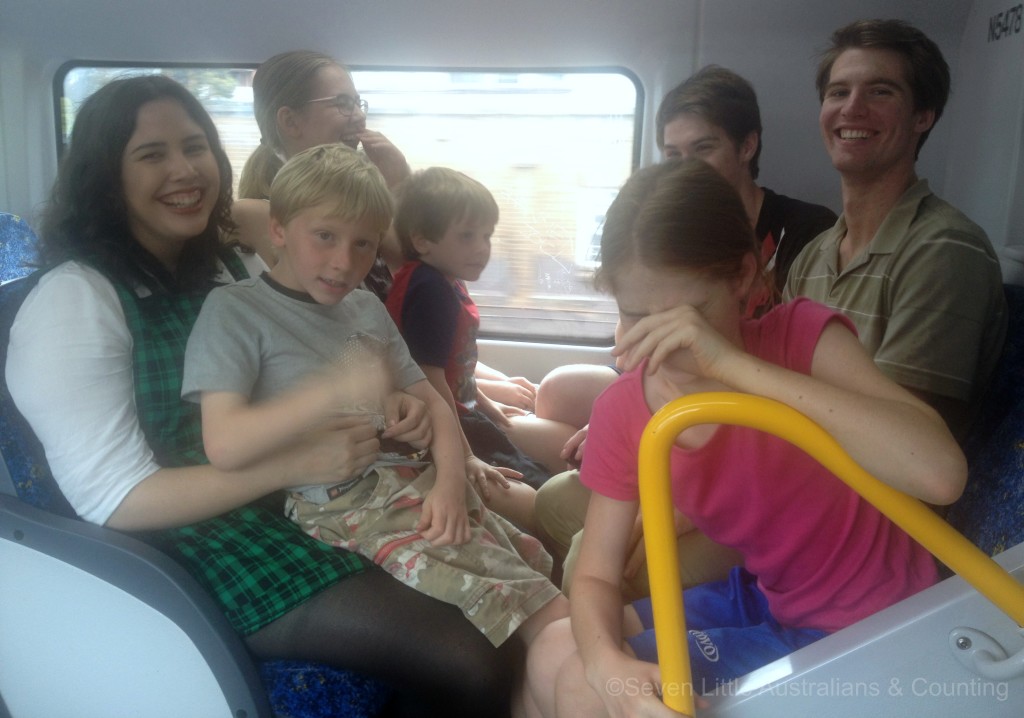 Much to the children’s pleasure the trip home was once again via Olympic Park involving the bus and train. They were extra pleased to share their experience with their big brother Carpenter and Rose.  We collapsed into bed in preparation for the next day’s adventure. 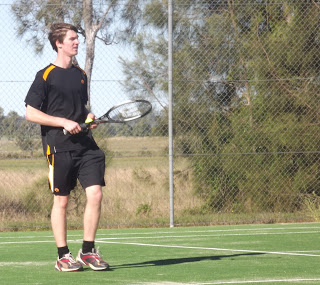 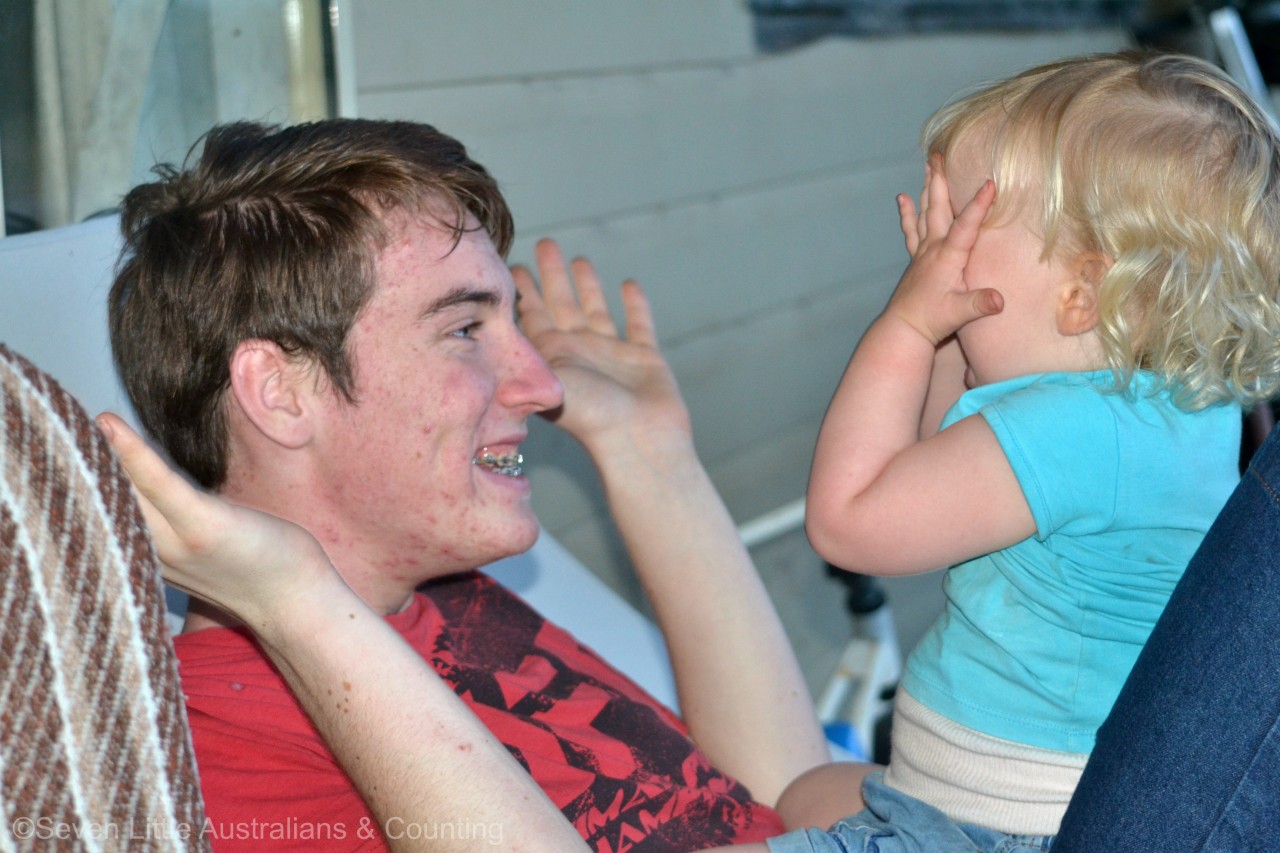