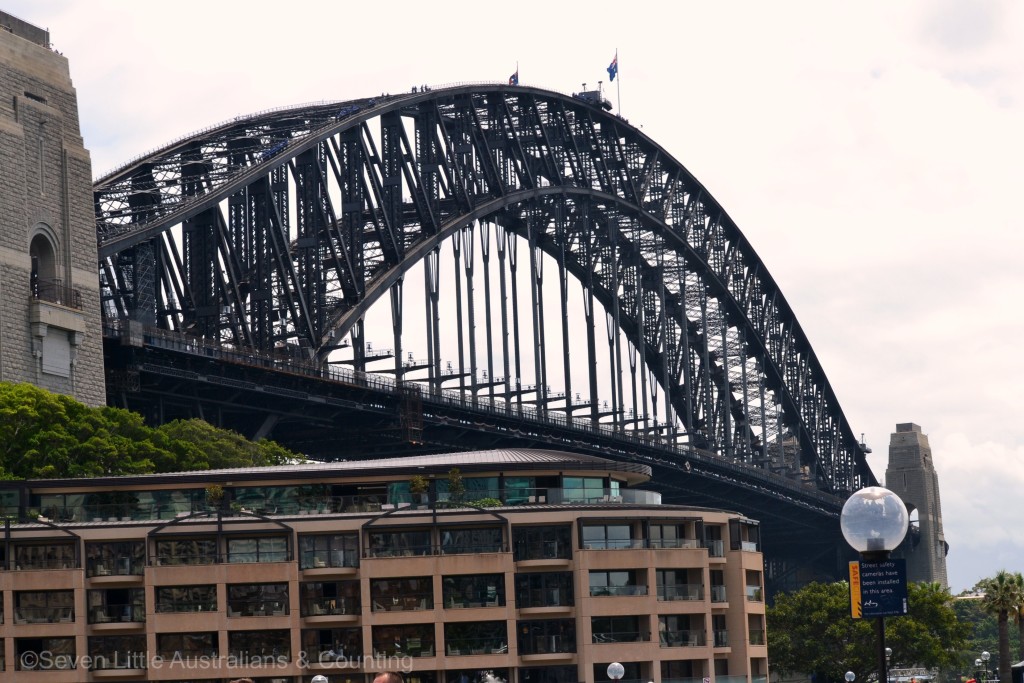 We set out Monday morning for our second leg of ‘playing tourists in Sydney‘ to find that work on the tracks was still happening as Monday was a Public Holiday. For my o/seas readers, Boxing Day, the day after Christmas is a Public Holiday but when it falls on a Saturday or Sunday as it did this past year, the public holiday is transferred to the Monday, still confused, not to worry we get a little confused too. Anyhow this meant a repeat of the previous days transportation routine, we changed at Parramatta from the train to bus, drove to Olympic Park again and were transferred back onto the trains, it was as if the City had put this on just to fulfill our children’s wishes 😉 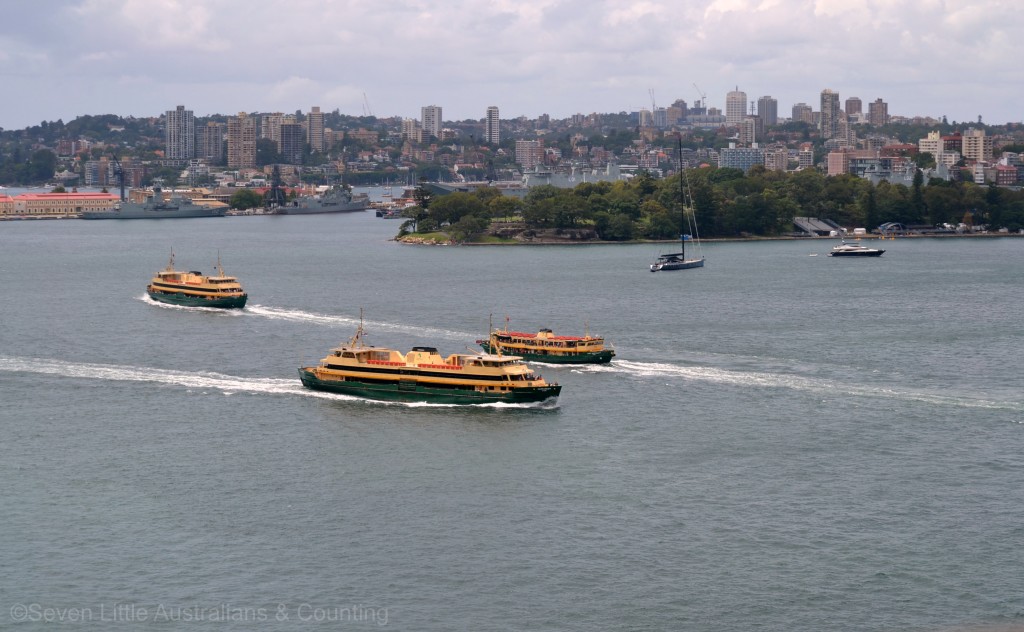 We took the train all the way into the City, through Central Station and right across the Sydney Harbour Bridge!! Sydney Harbour is one of the most beautiful harbours in the world, absolutely stunning, certainly popular with ferries, sailing boats and cruise ships. Its 240 kilometers of shoreline edges national parks, indigenous and historic sites and the hub of the City.  We exited the train on the opposite side of the Harbour and walked back over the Bridge. Talk about exciting!! The construction of the bridge began in 1924 it took 1,400 men eight years to build at a cost of 4.2 million. The engineering feat of the Bridge astounds me. It now carries eight traffic lanes and two rail lines and brave souls can climb the Bridge, brave indeed. It was absolutely fascinating looking over the Harbour as we walked across with lots of activity happening and the sights are gorgeous including the Opera House. The Opera House was a modern architectural design by Danish architect Jørn Utzon and was constructed between 1957 and 1973. The engineering and construction were cutting edge and it ran into complex engineering problems and the escalating costs made it a source of great public debate.  Both the Sydney Harbour Bridge and the Opera House are Australian icons and have a special place in many an Australian heart. 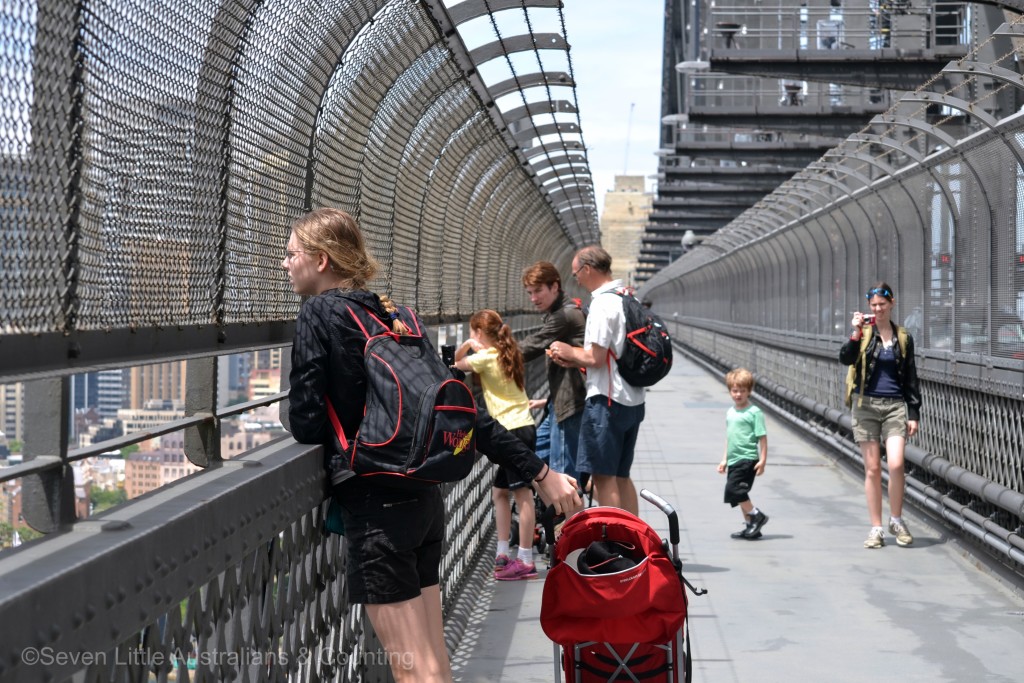 Once back on the City side of the Bridge we wandered through The Rocks, wending our way through the Markets and admiring the historic building. Europeans settled in Australia in 1788 and the Rocks was the site of the first public buildings and homes.  The Rocks have more than 100 heritage sites and buildings and its early history was easily apparent as we wandered through. I’ve since learnt of the Rocks Discovery Museum and wish I’d known whilst there, we’ve recently studied a little of Australian’s Early Settlement and it would have interested the children.  On a more personal note PC and I met in the Rocks so it has a special place in our hearts. 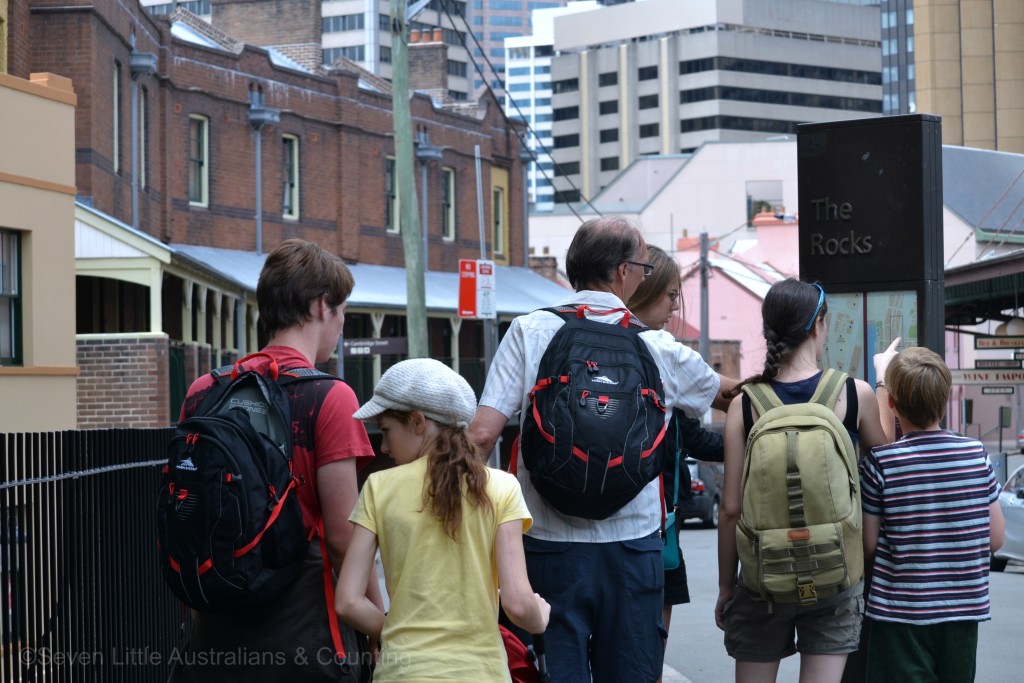 We walked back to Circular Quay and caught the train to Central Station and then transferred to the light rail (tram) to the suburb of Ultimo where the Powerhouse Museum is. The trams were fun, fast and so convenient, we all enjoyed our tram experiences and totally recommend travelling this way. When planning our tourist tour PC had insisted that we would need two light weight strollers as we had three days of intense walking and would need to be able to jump on and off trains, trams and ferries with ease and speed. Whilst the stroller occupants were mostly our two and four year olds, even our seven year old flagged and took his turn in the strollers, so pleased we’s sourced strollers. Our lunch plan was to buy hot chips, it took a while to source lunch and children were tired and hungry, lesson enforced a packed lunch is a far better idea when sight seeing. Entry to the Powerhouse Museum is free for children(16 and under) and $15 for adults. There were various exhibits but the ones that we most enjoyed were the transportation exhibit and the experimentation section. Truthfully we were rather disappointed by the Powerhouse, we had expected the exhibits would be more of an interactive, hands on nature. Lesson learnt, our children prefer more hands on experiences. 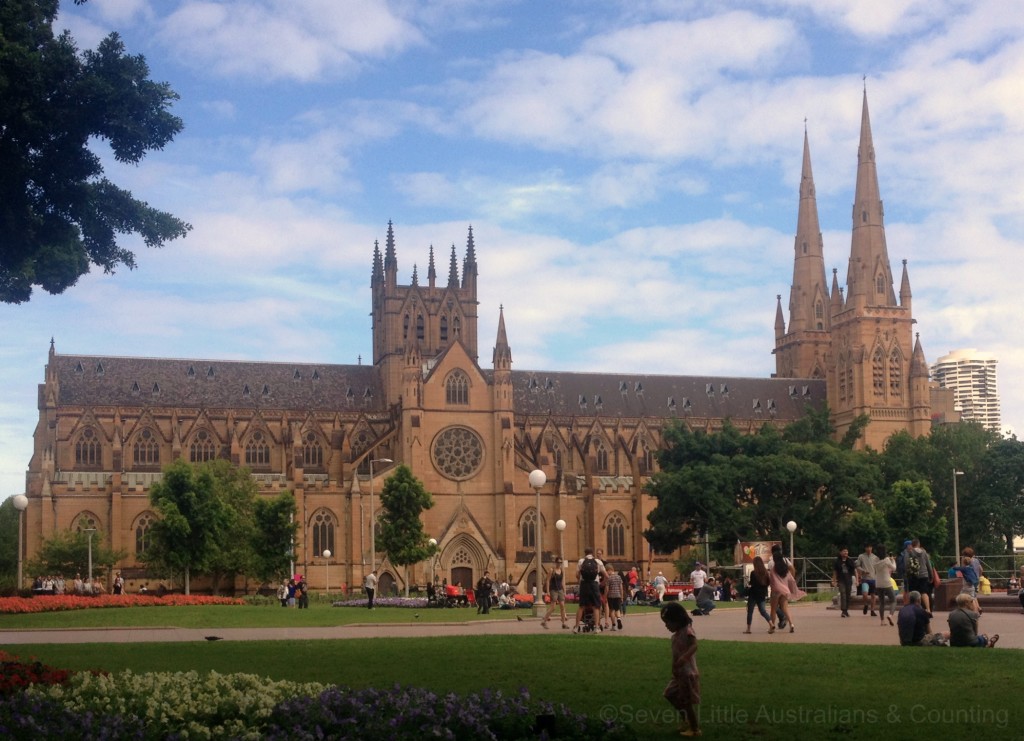 We once again caught the light rail, heading for St Mary’s Cathedral where we meet up with our older boys, Carpenter and Einstein and Rose. St Mary’s Cathedral stands on the site of the first Catholic Chapel in Australia, constructed in local sandstone in the “Gothic Revival” style similar to the great medieval cathedrals of Europe. The First Fleet arrived in Australia in 1788 with at least one tenth of the convicts being Catholic, however it was not until 1800 that the first Catholic priests arrived, as convicts themselves. Many Catholics were flogged for refusing to attend the Anglican Services, in the 17th Century it was not permissible for Catholics to attend non-Catholic Services by Church Law. Catholics catechised themselves and their children as best they could in the years before priests arrived. In 1803 to 1804 Fr James Dixon one of the convict priests was granted permission to celebrate Mass, this permission was withdrawn with the rebellion at Castle Hill. Mass was not legally celebrated in Australia again until 1820 with the arrival of Fr John Joseph Therry who was appointed by the Government in London. At this time Governor Macquarie granted the Catholic community land and construction on the first Catholic Chapel was begun in 1821 though not finished until 1833. It was not until 1829 that penal laws preventing Catholics holding Government positions ended. We can only imagine how devastating it was when the first Cathedral was razed to the ground by fire in 1865.  As the Cathedral is part of our, and our children’s Catholic heritage we were keen visit, but were disappointed when we discovered upon arrival that the Cathedral closes its doors at 4pm, we’d arrived only minutes too late. 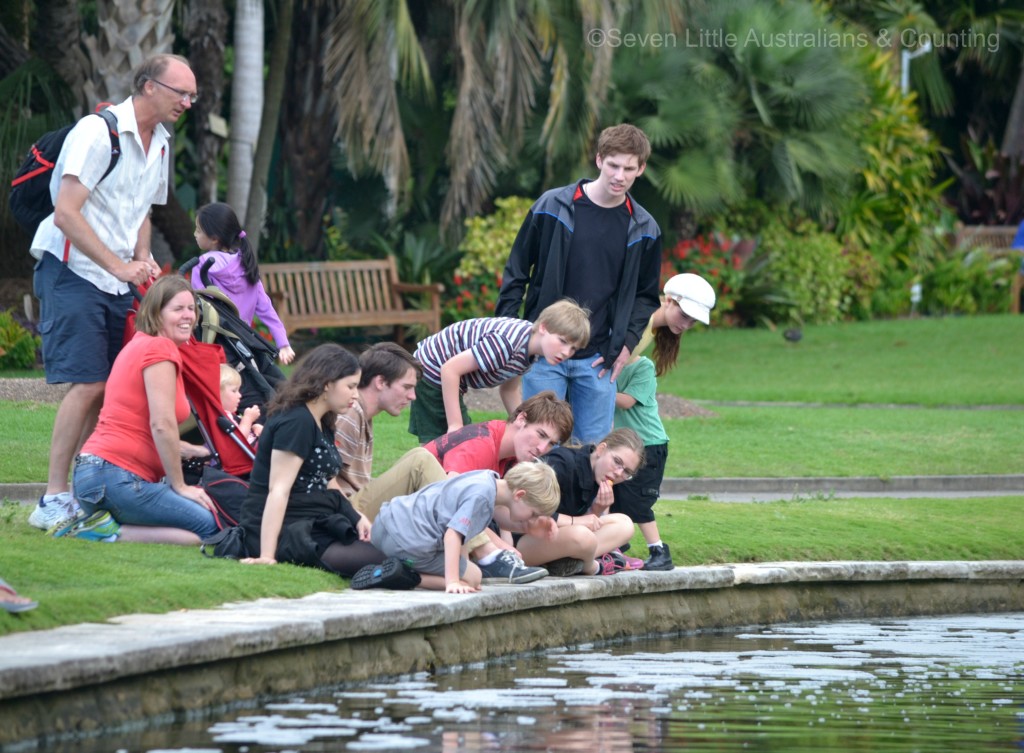 We then set out to explore the Royal Botanic Gardens, begun in 1816 it is home to an impressive collection of plants from around the world with a focus on ones from Australia and the South Pacific. The Royal Botanic Gardens are a short walk along the shoreline from the Opera House and the central business district, the Gardens are beautiful and the harbour views are superb. The Gardens cover 74 acres (30ha) and are a popular spot for lunchtime walks, picnickers, and Weddings. Our older boys were particularly keen to see the electric eels and to show the younger children. 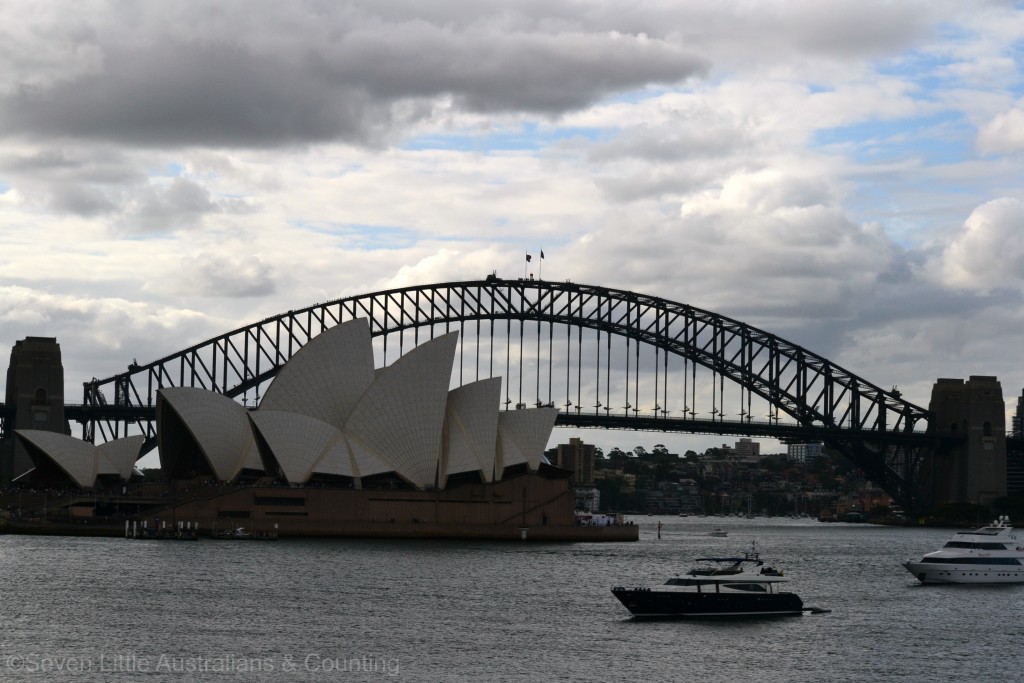 Our next destination was Lady Macquarie’s Chair, this Chair was carved in sandstone by convicts for Governor Macquarie‘s wife. Lady Macquarie over two hundred years ago enjoyed sitting in this spot and enjoying the panoramic views of the Harbour from this spot. Governor Macquarie was the fifth and last Governor of New South Wales from 1810-1821 and transformed our country from a penal settlement to a free settlement.  Some historians declare him to be the Father of Australia, certainly a large part of our Australian history studies in school was devoted to studying his influence.

Walking back towards the train station at Circular Quay we passed the Opera House when a small child declared he needed the toilet.  The nearest one was in the Opera House itself, so for a brief moment I mingled in rather opulent surrounds with the theater goers who were dressed in their evening gowns and I in my shorts and sneakers. Travelling home we once again retraced out route of train, bus and train.  The end of our train travels because on the morrow we had something else rather special planned. 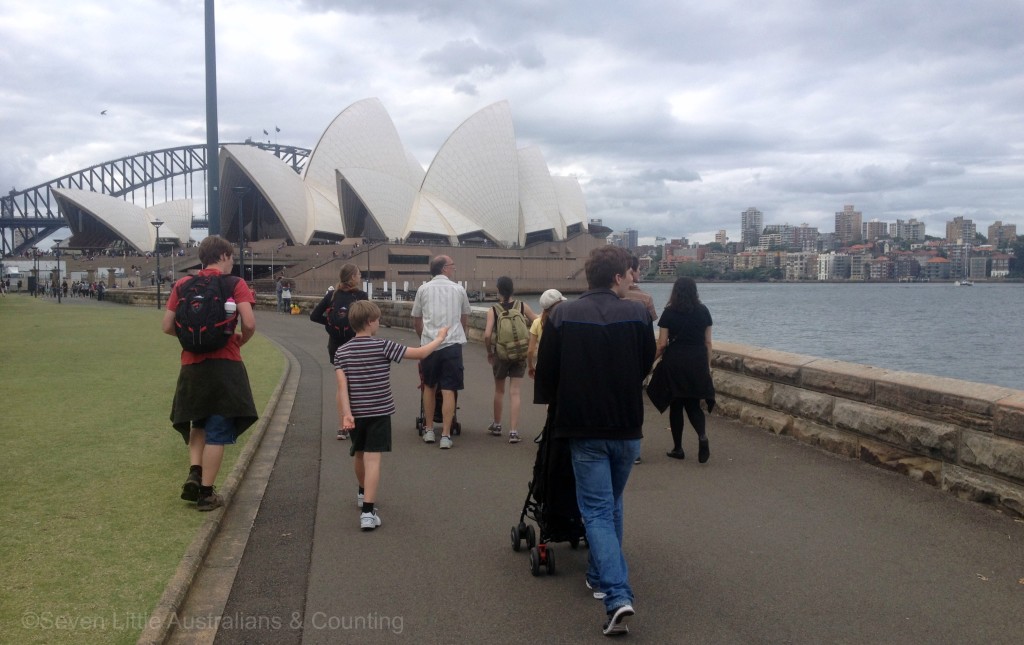