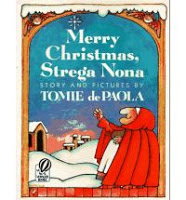 When I was first introduced to Tomie de Paola I wasn’t an immediate fan, his artwork didn’t appeal to me.  However I did enjoy his Saint books so I gave him a ‘second chance’ and he became a familiar ‘friend’. We now have a number of his books including his Christmas titles.

Strega Nona loves Christmas and has much preparation to undertake before she hosts a village party at her home.  Big Anthony wants to use magic, but Strega Nona replies, “No magic at Natale”.
By the story’s conclusion Big Anthony demonstrates he has learnt Strega Nona’s message when he organises the village to surprise Strega Nona with a feast prepared by the guests this year.
To be honest the Big Anthony/Strega Nona books don’t appeal to me.  I’d rate it 3 Star although my children would rate higher. 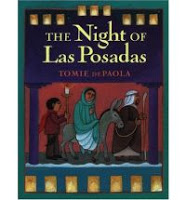 Night of Las Posados
The Mexicans have a lovely custom at Christmas, the whole village reenacts Mary and Joseph’s trials in seeking shelter.  This year ‘Mary and Joseph’ are stranded in the snow on their way to the Play, however ‘friends’ of the good Sister arrive and led the procession.  Sister later finds wet snow prints leading to, and fresh snow on, the figures of Mary and Joseph in her tapestry.
4 Star from me, less popular with my children. 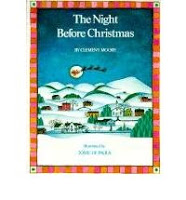 Night Before Christmas
Illustrated by Tomie de Paola, written by Clement Moore.  This is a childhood favourite of mine, I have warm memories of reading this to my own younger siblings on Christmas Eve.  I like de Paolo’s illustrations.
4 Star 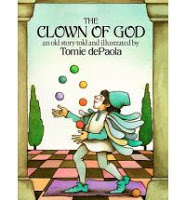 The Clown of God
An orphaned child joins a travelling troupe and spends many years on the road as a juggler.  He enjoys success and adulation. One day he lunches with a couple of Franciscans who explain, all we do is for God’s Glory.
The Juggler grows old and one day a ‘terrible thing happens’, he fumbles and drops the balls, the crowd laugh and run him out of town.
He finds shelter in a Cathedral on Christmas Eve, seeing the stature of the Child Child ‘looking sad’ he performs for Him, this is his last act, an act of love.  5 Star. 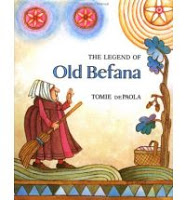 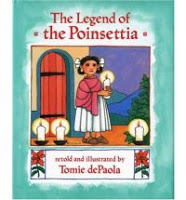 Legend of the Poinsettia
Lucida’s mother is honoured to when asked to weave a new blanket for the Christ Child for the Christmas Procession, the entire village is involved in various preparations. Mother is taken to the hospital sick and is not able to finish the weaving. Lucida tries but is unable, as the village process in and old woman explains to Lucia that a gift given in love is most appropriate. Lucida takes in a pile of ‘weeds’ which when placed at the crib bloom into Poinsetta flowers,
5 Star 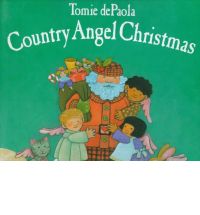 Country Angel Christmas
The Country Angel’s are to prepare the Christmas pageant this year. The three smallest angels want to help but everybody tells them  they are too small.  St Nicholas suggests an idea and they play a star role by ‘saving the day.’
I confess this book does nothing for me, not my idea of how heavenly angels would behave, and the ‘country theme’ seems rather ludicrous. 2 Star 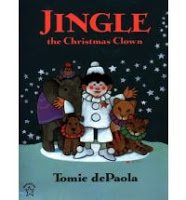 Jingle the Christmas Clown
The troupe travel all day to arrive at their destination to find the village deserted, with only the old folks left.  The troupe travel onto the city to perform but Jingle stays behind with baby animals who are too tired to travel further. Jingle and the baby animals feel compassion for the older folks who will have a lonely Christmas, they organise a performance. 4 Star 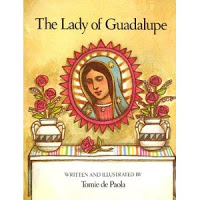 The beautiful story of Our Lady of Guadalupe’s appearance to Juan Diego. Very informative.
5 Star 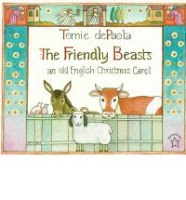 The Friendly Beasts
An old English carol, very sweetly illustrated by Tomie de Paola. Unfortunately as we don’t know the tune we don’t appreciate this book enough, so although I originally rated it a 3star, it does deserve higher.