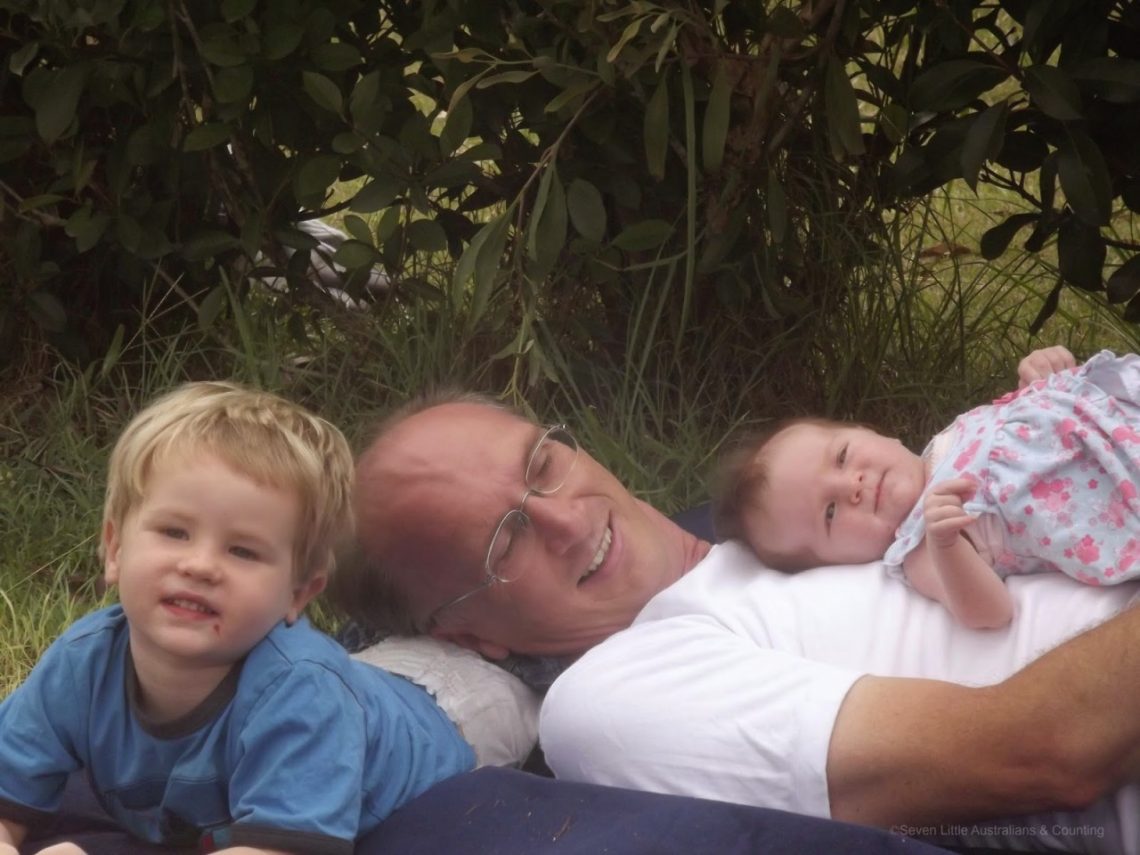 Introducing you to a very special guest here on my blog, my husband PC, my Prince Charming himself. PC is my biggest fan, not only does he read all of my posts and all of my comments, he complains pleads for more posts when I take ‘too long’ between posts, then supports me in practical ways so I have time to write. The ‘man behind the scene’, he’s rather awesome, anyhow Renee’s interview with her husband, was so entertaining I thought I’d ask PC if he was willing to play along.  Unlike Renee I didn’t spring it on him as he walked in the door;) I emailed him at work 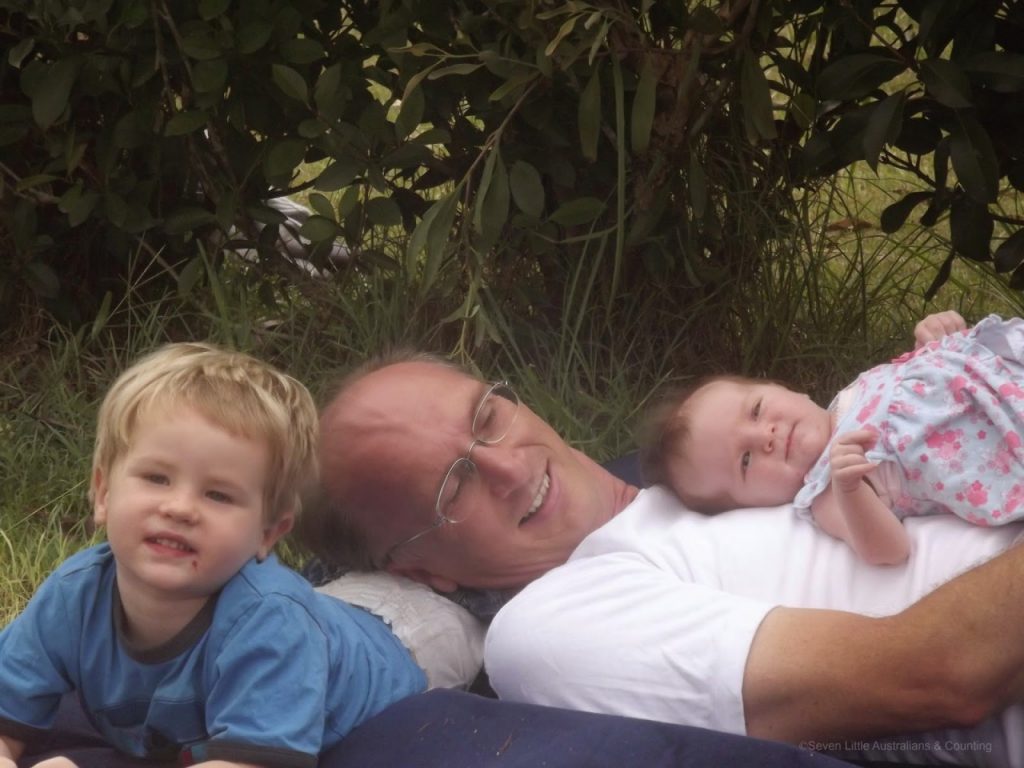 Erin: Hey interested in doing a blog interview with me tonight? Renee (you know Renee, she always leaves me lovely comments) anyhow she threw out a challenge, you might enjoy it
Good sport that he is he agreed and I finally interviewed him a few nights later.

Erin: What is the best part about being married to Erin?
PC: Dinner on the table when I get home from work, usually it’s edible (* he has a smirk on his face, I don’t take the bait, I roll along)

Erin: What is the worst part about being married to Erin?
PC: Hockey pucks for afternoon tea (*he laughs, he’s in a mood, I can tell, sigh)
Erin: Okay I admit I had some failures when we were first married but not lately.
PC: Yeah you’re better now, but we used to have ‘the bricks’ we could have built the house with them (early attempts at bread making) and the ‘hockey pucks’ (scones)
(*I move it along, he seems to have some food obsession going on??) 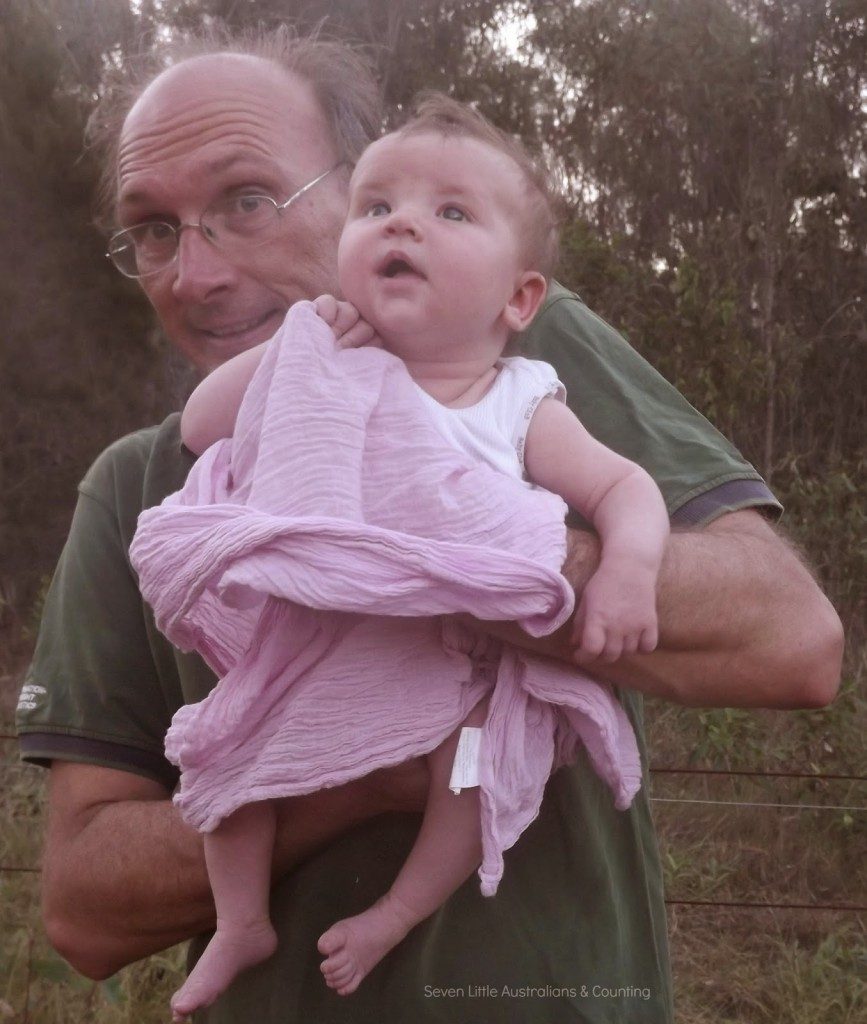 Erin: What is Erin’s most endearing habit?

Erin: How about we move on and come back, you can check the thesaurus if you don’t like the word habit, I can change the word if you want.

PC: But don’t you have to stick with Renee’s questions
Erin: My blog, I’ll change the wording if it makes you happier, moving on

* At the conclusion of the questionnaire, we come back, he has his answer
PC: Well it’s not a habit (still the wordsmith here;) but it is endearing. Your love for babies, your love for children.  When you’ve just given birth you have a glow, when you look at our baby I just fall in love with you more. You know that’s one of the things I really was attracted to when I met you, the love and time you had for your siblings, you were family orientated.
Erin: Well the amount of babies we’ve had we could say it’s a habit;) 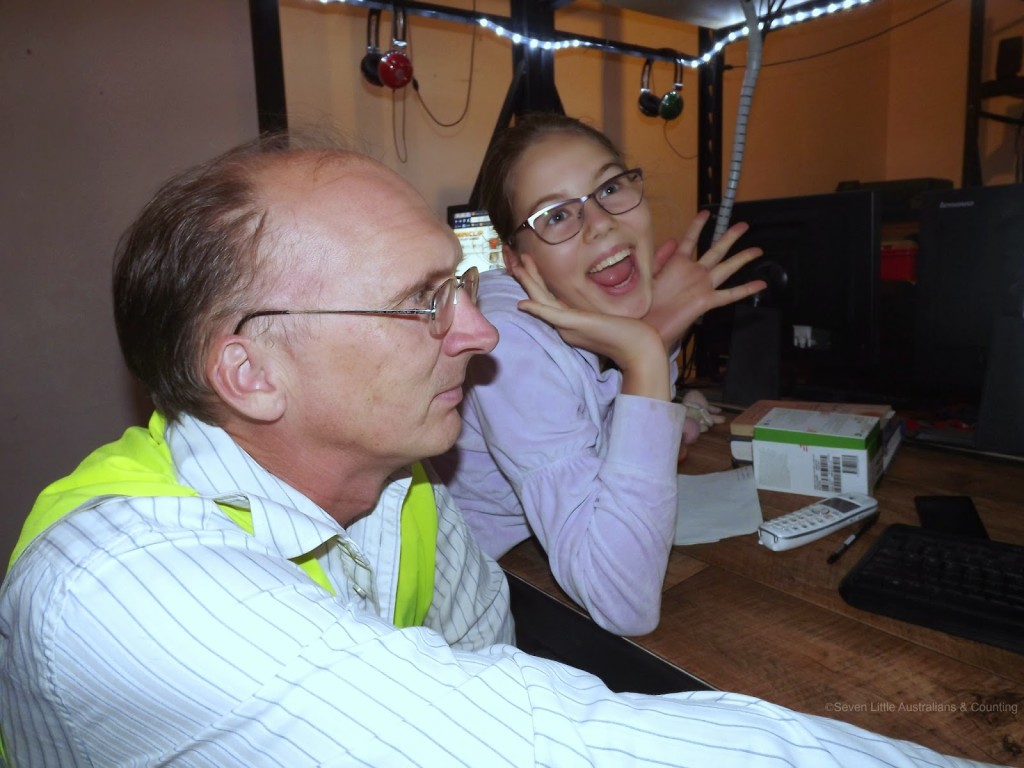 Erin: What is Erin’s most annoying habit?
PC: Annoying..annoying. I don’t know what’s your most annoying??
Erin: Just give me one
PC: But I can’t think of any
Erin: Well they mustn’t be that annoying then
PC: Let me think
Erin: We’ll come back, moving on
*We answer this question after all the others too
PC: I’ve thought of one, your inconsistency with the housework.  Sometimes you are on top of it, sometimes no where near and then, when it bothers you, you irritate everyone because they all have to help right then, regardless of plans they might have made. Maybe it’s endearing though, at least you are flexible, you don’t annoy everyone all the time expecting a perfect house. Annoying and endearing. 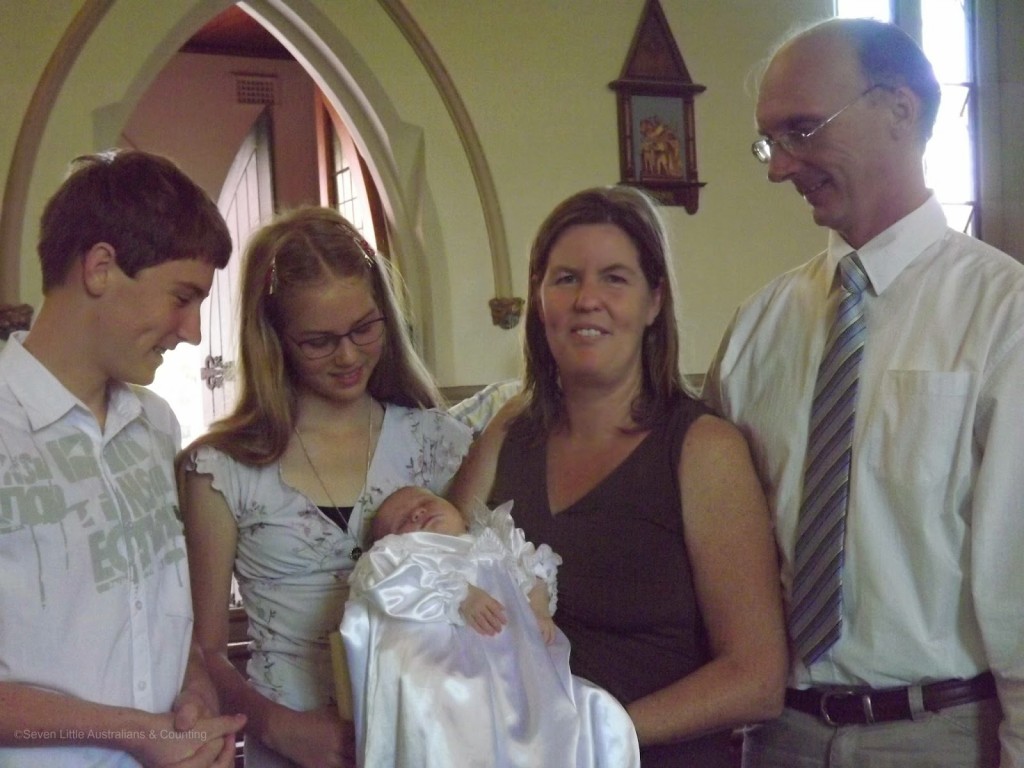 Erin: What do you admire most about Erin
PC: Your ability to talk to anyone, anywhere and listen.

Erin: What was the first thing that attracted you to Erin.
PC: You’re a great conversationalist

Erin: What do you enjoy most about being a Dad?

PC: Seeing the children develop their personalities, their skill sets, their interest in the world around them whether it’s learning to walk or learning to drive

Erin: What do you least enjoy about being a Dad?
PC: Disruptions (*wink wink*)
Erin: This is a G rated blog and our children often read this blog! Moving on
Erin: What was your favourite thing to do with Erin pre-kids?
PC: *laughs and laughs*
Erin: Moving along now, stop laughing
PC: *still more laughter* 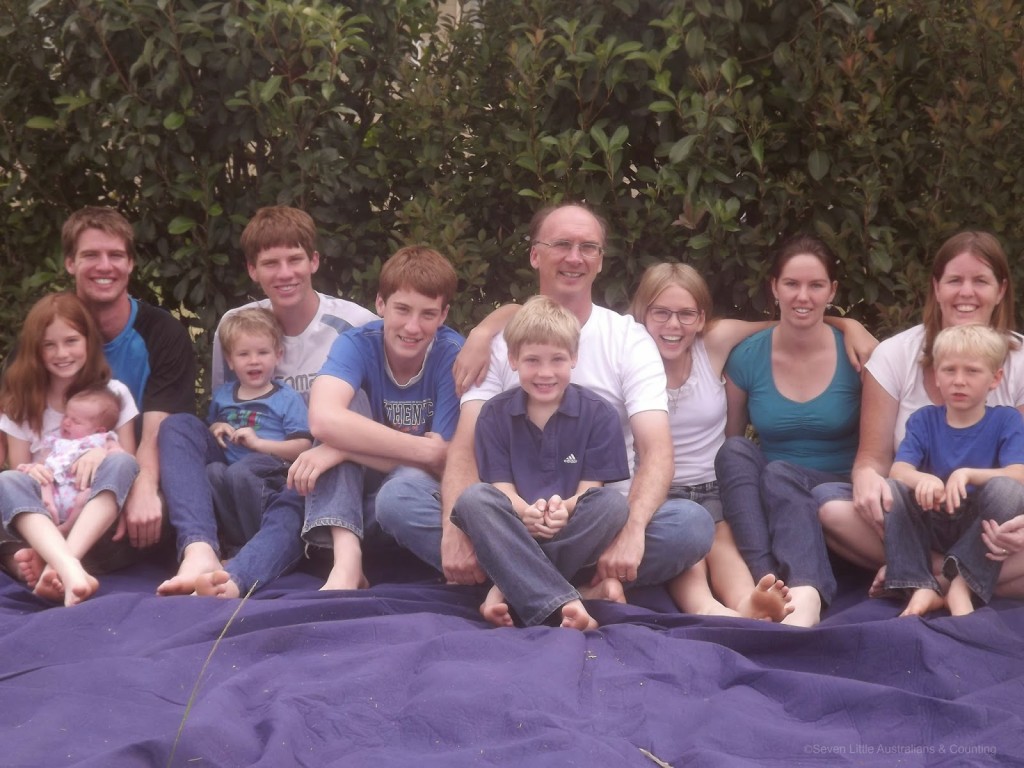 Erin: What do you miss doing with Erin now you have kids and limited time?
PC: I miss the spontaneity, it’s not really children, it’s more because we are building a house and have other commitments for time and money, but I miss being able to just decide to go out and then go.  We just don’t have time.

Erin: What is your most disliked household chore? Do you even do any household chores?
PC: I love them all
Erin: (*I roll my eyes, then prompt him) What about washing up
PC: Not my favourite, I don’t like wiping the bench either
Erin: What is your least disliked household chore?
PC: I like packing the dishwasher, it’s easy and if I pack it I can make sure the dishes are washed properly (and if it fits in I don’t have to feel so guilty leaving it on the bench for someone else to hand wash)
Erin: What’s your favourite thing to cook?
PC: Bacon and eggs
Erin: What do you think Erin loves most about you?
PC: My soul, my integrity
Erin: Too true 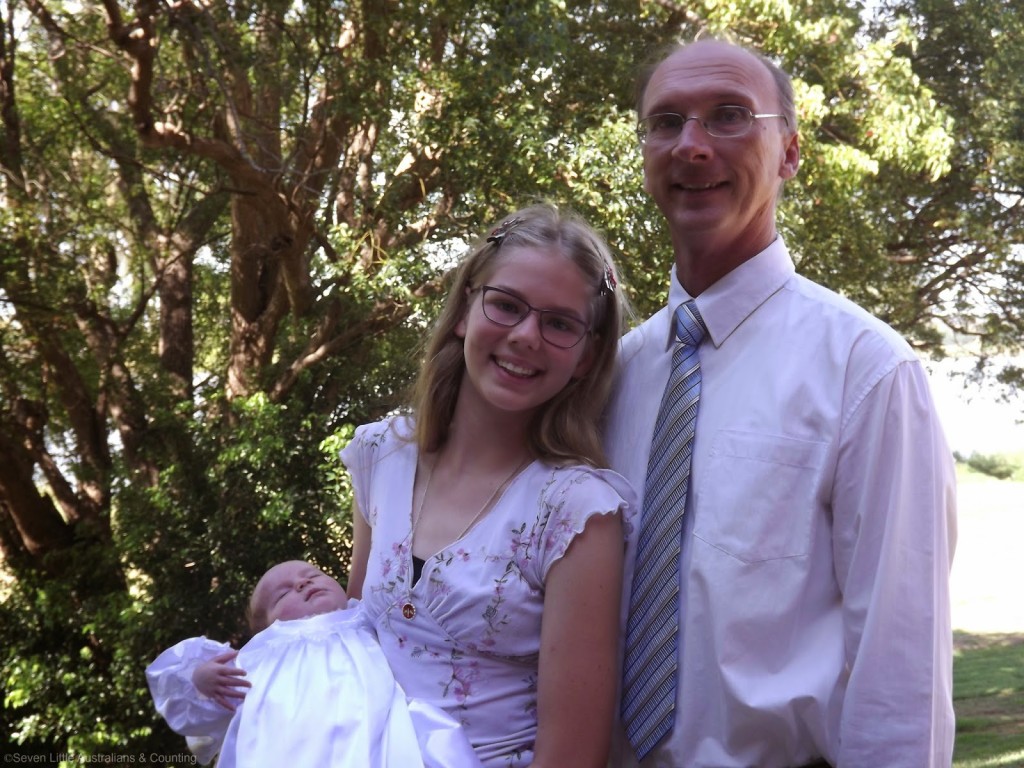 Erin: What do you think annoys Erin most about you?
PC: My Dad jokes
Erin: Dad jokes?
PC: My lame jokes
Erin: Yes they are very lame. Actually that Kermit the Frog face you pull anytime the camera goes near you annoys me, I can hardly ever get any decent pictures of you

Erin: Why do you think Erin is lucky to be married to you?
PC: I’m one of a kind
Erin: What do you think is the secret to a happy marriage?
PC: Patience and love, wanting the best for the other person and working towards that. Love is best summed up in the reading we had at our Wedding.
Though I command languages both human and angelic — if I speak without love, I am no more than a gong booming or a cymbal clashing.
And though I have the power of prophecy, to penetrate all mysteries and knowledge, and though I have all the faith necessary to move mountains — if I am without love, I am nothing.
Though I should give away to the poor all that I possess, and even give up my body to be burned — if I am without love, it will do me no good whatever.
Love is always patient and kind; love is never jealous; love is not boastful or conceited,
it is never rude and never seeks its own advantage, it does not take offence or store up grievances.
Love does not rejoice at wrongdoing, but finds its joy in the truth.
It is always ready to make allowances, to trust, to hope and to endure whatever comes.
Love never comes to an end. But if there are prophecies, they will be done away with; if tongues, they will fall silent; and if knowledge, it will be done away with.
For we know only imperfectly, and we prophesy imperfectly;
but once perfection comes, all imperfect things will be done away with.
When I was a child, I used to talk like a child, and see things as a child does, and think like a child; but now that I have become an adult, I have finished with all childish ways.
Now we see only reflections in a mirror, mere riddles, but then we shall be seeing face to face. Now I can know only imperfectly; but then I shall know just as fully as I am myself known.
As it is, these remain: faith, hope and love, the three of them; and the greatest of them is love.
(1 Corinthians Chp 13 vs1-13)
*PC can’t quote all from memory but thought I’d include it for frame of reference

Thanks Renee, and to Kylie who started the whole ball rolling with the questions and idea of hosting this fun interview:)  PC and I read their interviews after writing ours, we were fascinated and surprised at how similar some of their answers are to ours, lots of fun:)