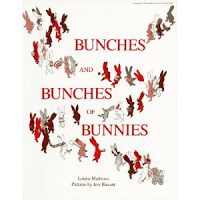 Our Princess has been struggling with maths. In particular she has needed to know her times tables but has been most reluctant.  In a bid to foster a love of maths we put the workbooks aside and began a different mathematical journey.  Knowing Princess enjoys picture books we sought out Living Math Picture Books.

I spent time perusing the recommendations at Living Math, sorting through for Living Math Picture Books based on multiplication. The age suitability wasn’t clear either so it took time to decide what was appropriate for a nine year old.

Bunches and Bunches of Bunnies – Louise Matthews
Teach multiplication in a fun, silly way by counting ‘bunches of bunnies,’ with lots of colourful pictures.  A simple text and on the young side for a nine year old, but it did help to make Princess relax about maths. 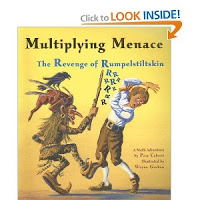 Multiplying Menace: The Revenge of Rumpelstiltskin (A Math Adventure) – Pam Calvert
Rumpelstiltskin is back, multiplying the king’s nose by six and vowing to do the same for the entire royal court, unless Peter, the queen’s 10-year-old son, agrees to go with him to work off the debt. The young prince takes possession of Rumpelstiltskin’s magical multiplying stick and restores normalcy to the kingdom.

This book was more about the differences between multiplying with whole numbers and multiplying with fractions, and moved rather fast for where Princess is at.  Still fun maths immersion. 8 yrs plus. 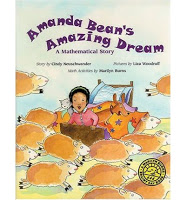 Amanda Bean happily counts “anything and everything” by ones, twos, fives, and tens. Although her teacher tells her that learning multiplication is important, Amanda remains unconvinced until a strange dream presents her with arithmetic challenges that overwhelms her counting skills. She awakens to learn to multiply “anything and everything.”
Recommended for 6-8 yrs but another fun introduction. 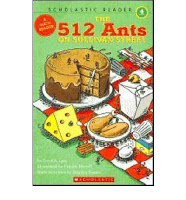 512 Ants presents the concept of doubling numbers. A little girl sees “1 ant” through a telescope. Then two ants appear, then four until 512 ants “had a picnic with goodies to eat, down in their ant hole on Sullivan Street.”
Written for 5-8 year olds an easy introduction to the concept of multiplication. 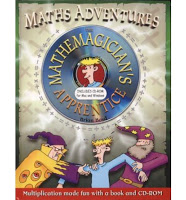 The Mathemagician’s Apprentice -Brian Boyd
Oz the mathemagician’s apprentice needs help with his final test. Teaching times tables whilst you help Oz.  Packed on each page with an activity to do, the book also includes a CD.  Princess really enjoyed working with this, and needed Michelangelo’s help.

This was our first introduction to Greg Tang’s books, we were very impressed and are now fans of his work. 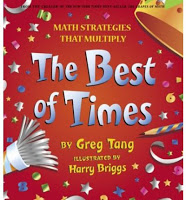 The Best of Times – Greg Tang

Greg Tang uses rhymes and commonsense tricks to walk through the multiplication tables from zero to 10. For example, if you know how to multiply by two (“Two is very fast and fun, quickly double and you’re done. What’s that you say, be more precise? Okay then, just add it twice!”), then fours (“… please just always double twice!”) and eights This book does not promote the memorization of multiplication facts, but teaches the reader to problem solve and use different approaches and strategies. Does move fast but we found it excellent! 5 Star. 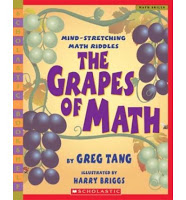 Tang shows readers creative ways to use patterns and combinations of numbers to solve math puzzles quickly and effectively. Rather than laboriously counting 24 mushroom slices on a pizza, Tang suggests: “Let me give you some advice, / Just do half and count twice.” And in adding the number of dots on a fan: “Instead of seeing groups of threes, / Count by fives and it’s a breeze!”
Each riddle offers a clue, the “Answers” section at the back of the book, offers an explanation of each problem and shows how to group objects together and look for patterns. Recommended for 8-10 years. An easier introduction than ‘The Best of Times.’ Excellent! 5 Star.

Not a multiplication book but about place value, I couldn’t resist purchasing however as we already have the other Sir Cumference titles.

Sir Cumference and All the King’s Tens

Sir Cumference and his wife, Lady Di host a surprise birthday party for King Arthur, the couple needs to organize a growing number of guests for events to run smoothly. After several fumbling attempts to count the crowd, Sir Cumference realizes that the simplest way to figure out the total is to group the guests into tens, hundreds, and ultimately thousands. Teaching Place Value recommended for 6-10 years, all our family members love these titles though.

*Check out our Book List page for all of our book reviews.