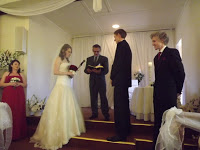 Saturday dawned bright and sunny. At 10am our nephew Michael was to marry his sweetheart Emma.  PC and I set off for the church, and the children under the care of their big sister and brother, left for the park. The children were excited to later report that they saw Emma before us, when she passed in her wedding car. 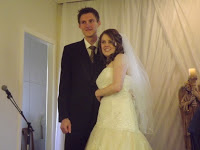 Emma was a beautiful bride and so obviously delighted to marry Michael.  She cried all the way up the aisle, when she reached the front of the Chapel Michael was also in tears, as were a few others:) They were both so radiantly happy.

We were honoured to share the day with Michael and Emma.  PC is one of seven, but as his siblings are spread out over three states, we don’t often we get to visit one another, so we made the most of this opportunity 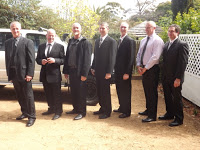 PC with his brothers and bil.  Note PC is not the shortest.  The guys we enjoying themselves fooling around. 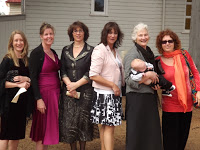 The guys’ humour was contagious, laughing around with my sils and mil.  (The mother of the groom is missing) 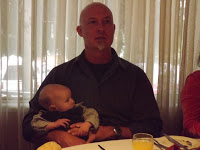 The first time most of the uncles and aunts meet Bass. The Reception was busy with chatting and dancing.
When we returned to Mrs B’s we discovered this wonderful lady had spent the day at the park with the children. 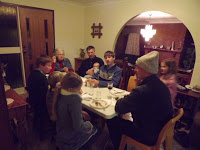 We then enjoyed a family BBQ at PC’s brother and sil (the parents of the groom) for tea.  The children caught up with their uncles, aunts and grandma. 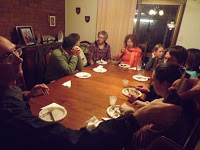 The brother of the groom (and best man) was also there so they caught up with their cousin too.   All good things come to an end, we returned to Mrs B’s determined to leave early the following day for the Outback.