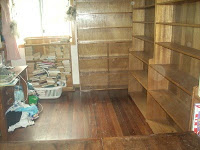 After arranging the study Koala and I began working on our favourite room, the library:)
My plans were originally to start on Wednesday but Koala was keen, so by late Tuesday afternoon we were ready to begin. First we lined the walls with the bookcases. 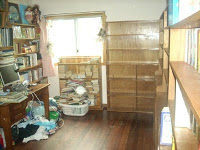 We then moved the bookcase off the top of the desk (we’d been short on space before) and moved it to the study. 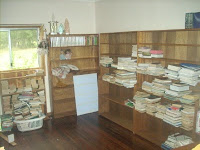 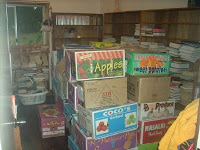 We then enlisted the boys help to carry the book boxes from the shipping container down to the house. They decided to utilise the trailer and drive them down, this took 3 trips. They stacked 80 boxes of books in the centre of the library. 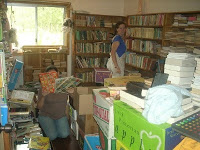 Koala and I then began the task of unpacking and organising. One friend arrived to help unpack, others have offered to come and play er work to;) 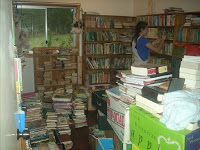 Koala worked by my side all week{{}}. It has been a mammoth challenge; sorting, culling, organising. 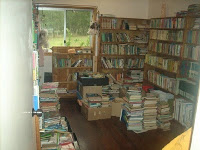 Progress was slowly made, at times it looked like we were just moving book piles around the room, but a system was emerging. 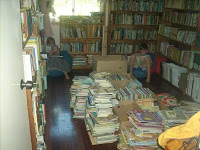 A longed for dream has been to have bookbins for our picture books. PC has promised to make them but it isn’t a high priority at present. I decided to make a home made version for now with cardboard boxes. 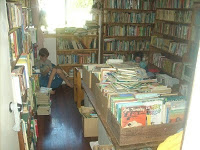 As we worked we started making some adaptions. We laid an old wooden door on some besser blocks to raise the boxes off the ground. We also changed some of the cardboard boxes for wooden ones. 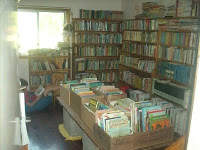 Each box houses a different theme; Australian, classics/authors, geography/history, letters/numbers, animals, general picture books. Previously the books were too squashed and difficult for the younger children to access now they are constantly reading:) and returning books correctly. Bookbins are fantastic!! 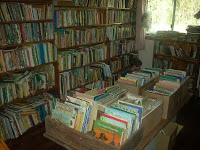 The bookcases around the room are also arranged by subjects. The first bookcase houses Australian books, then nature/science with an overflow of Australian and history titles. The third bookcase contains the history books. 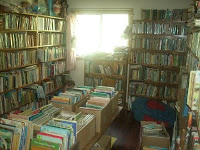 The back bookcase is literature, then sets (including twaddle), another bookcase with more sets and lots of reference books and then Faith books including Faith picture books.

For now we have beanbags and a mat for reading, we would add some comfy chairs later. Good lighting will also be added later.
We are all very thrilled and the library is in constant use:)