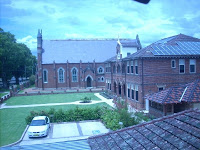 PC and Team have spent days over the last three weeks salvaging timber flooring for our extensions.  Our local Convent (to the right, Church is in the background) is dismantling their old School (picture taken from the School looking out over the rooftops.) Remember my find of blackboards and corkboards? 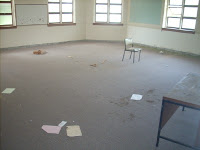 During that visit it occurred to PC that under the carpets lay timber, sitting on concrete floors.  We inquired, researched and made a bid which was accepted.  The job that now lay ahead was to ‘rip up’ five large rooms of yellow box, which we will then lay in our new extensions. 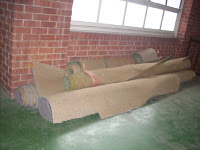 First they had to roll up the carpets and move them out of the rooms.

Then all the staples had to be pulled out, which fell to Koala and Michelangelo.

One time consuming part was starting from the edge of each    room.

PC as inventive as ever, was sure there was an easier way to lift floorboards than just using crowbars.  He made an invention that not only saved time but increased salvage rate. These were so successful he welded several more through the weeks.

Part of the team worked on lifting the boards. 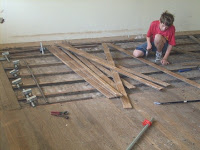 Others teams worked on removing the nails. 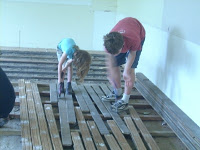 Jelly Bean was keen to help and spent a morning being part of the team. 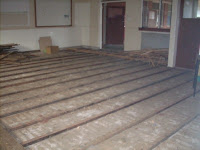 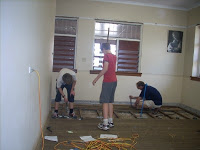 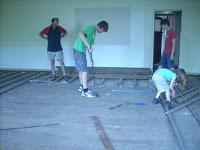 Working in tandem lifting the boards and de-nailing as they go.

Princess impressed us with her willingness to work for days on end. 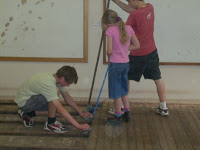 Once again we were so proud of the children, they were valuable members of the Team. 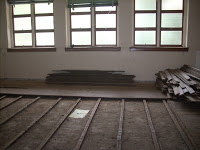 Timber stack begun, piling higher now.
One more room to go and then another challenge…removing the boards from the second floor.