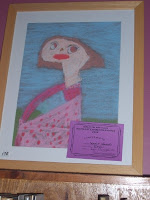 Recently our children have been branching out into new areas. For Nature Boy this has included a term of art lessons. This was a big step for him as he ventured forth on his own without his siblings. It was good to see his self-confidence blossom and his teacher was very good at getting him to be assertive in his decision making in regards to his art work.. His teacher is excellent in fact at drawing the most from the children, true she is rather formidable in some ways but she does love to see the children progress. The term ended with all the members of the Junior Art Club entering their work in our local town Festival’s Art Competition. Imagine the surprise and delight of Nature Boy when he won a MAJOR prize! He was the “Runner Up” (second to the Champion) for the entire primary school division, not only that but he was the youngest participant. A real bonus was that he even received prize money. He was most delighted to hear that some of the ‘big wigs’ in the town’s art world wanted to ‘buy’ his picture. Would he sell? Well “NO” the picture was a portrait of his mum! And he couldn’t sell that not even for $500.

The sheep pastel drawing is his favourite and his circle painting is dad’s favourite both which he also entered in the competition. 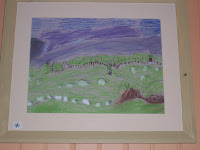 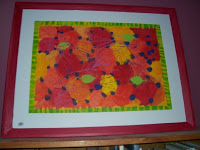 Five of ‘The Seven” have been having swimming lessons this term which has been very beneficial. The highlight of our term was this weekend when the older two participated in a bi-atholon. This consisted of them running 1km each and swimming 600m and 400m respectively. I was so proud of them it was an absolute huge effort, swimming 12 and 8 laps of a 50m pool is a mammoth task and then to run on top of it, I thought all the children were champions just for doing it. An exciting part of the whole experience though was that Koala won first place in her division! Yeah well done Koala and well done Carpenter for a big try, loved that last minute sprint for the finish line. 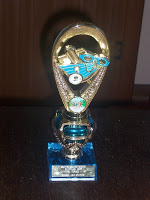